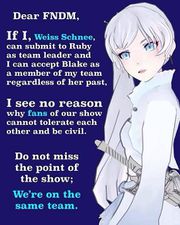 Bumbleby and Blacksun have been Blake's most popular ships since the series began. The ship war first started in earnest when volume 2 was airing, most notably after Blake danced with both Yang and Sun at the ball. The intensity of the war only increased after volume 3's finale due to Adam Taurus claiming he would destroy everything Blake loved, "starting with [Yang]." This brought about discussions within the fandom on whether Bumbleby would actually be explored in the future over the a more obvious expectation of Blacksun becoming canon. Unfortunately, this lead to fans on both sides getting very defensive over their ship's chances.

Tensions rose when the song "Like Morning follows Night" was used during volume 4 as it focused on Blake and Sun's relationship. Blacksun fans also pointed out that Blake and Sun started volume 4 on a literal ship and that they continued to do typically couple-coded things together, such as carrying each other bridal style, meeting Blake's parents and being teased by her mother. Meanwhile some Bumbleby fans found it uncomfortable that Sun followed Blake without telling her, with some going so far as to call Sun a stalker. This label was heavily debated.[1]

Things worsen following the release of volume 4's soundtrack which contained a love song called "Bmblb", the same name as Blake and Yang's ship, that fans interpreted as being written from Yang's perspective about Blake. However, Blake's voice actor responded on Twitter that any song that does not appear in the show itself is not consulted on like others are. As such Bmblb was simply a dynamic that composers Jeff Williams wanted to explore, and did not indicate canon romantic feelings between Yang and Blake.[2] This clarification only added further fuel to the ship war[3] and the tweets were later deleted.

Certain sections of both the Blacksun and Bumbleby fandoms have claimed to have dropped the show once they felt it was apparent that their ship would not become canon. For Bumbleby fans this was around volume 4-5 when Team RWBY was split up and Blake spent most of her time with Sun back home. Blacksun fans made similar claims after Sun exited the narrative at the start of volume 6 and Blake and Yang began to reconnect.

By 2019 when volume 7 was being released the shipwar had lessened, in part due to Sun no longer being present in the show and many fans from both sides of the war agreeing that Bumbleby was likely to become canon at some point in the future.

Accusations of homophobia have been a hotly contested factor within the shipwar. Bumbleby fans have noted opposition to their ship sometimes comes down to others being homophobic and not wanting see any LGBT couples within RWBY, whether it be Blake/Yang or others. Blacksun shippers have also commented that preferring their ship over Bumbleby is not inherently homophobic, nor does it invalidate Blake's bisexuality.

The term "Wasp" began being used by Blacksun fans to negatively reference "Bee" shippers. It's intention to only label "toxic" Bumbleby shipper has been questioned by the fandom as the term began to be used outside of shipping communities. It has generally been poorly received by Bumbleby fans as it is believed to increase divides within the fandom and to encourage the on-going ship war. There is also the belief that the term is used to label all Bumbleby fans, regardless of their behaviour.

In terms of the RWBY Fandom during the Bumbleby vs Black Sun shipping war, the shippers for the former have been called “Wasps” when they actively invalidate any other ship that involve Yang and Blake. While it has been used mostly by those that consider themselves Black Sun shippers, other fans of other ships have used this term towards the shippers of Bumbleby as a whole. Suddenly, it didn’t matter if you actively attacked other ships or not. If one shipped Bumbleby, you instantly are assumed to be a “Wasp”.[4]

Could we like…oh I dunno, maybe not use the term wasp? Yeah there are some pretty shitty bee shippers but you know what? There’s some pretty shitty shippers in every goddamn ship, yet it’s only bee shippers who who get called names. Not only is it incredibly juvenile, the term also tends to be used on any bee shipper that expresses an opinion some people don’t like (I’m not joking; people were called wasps just for saying they don’t think Sun’s going to Atlas), not just the truly toxic ones.

If y’all really want the fandom to be more positive place, maybe responding to negative shippers with name-calling isn’t the most productive way to do that.[6]

Similar to "Wasp", the term "Sundowner" exists to label "toxic" Blacksun shippers.[7] However the term rarely sees use, even less so outside of shipping communities.

Fans, within and outside of the Bumbleby and Blacksun fandoms, have felt the ship war was having a negative effect on the overall RWBY fandom. In May 2016, teamgentsfancynews noted:

[...] We are getting to JohnLock levels of ship wars here, and nobody wants that. Let people ship what they like. You don’t see White Rose shippers attacking Nuts and Dolts fans. We are all fans of a show we love, and if we want to ship different characters together, that’s fine. What does is hurt you if someone doesn’t like Bumblebee, or doesn’t like BlackSun? As long as we aren’t attacking people because of it, it’s perfectly fine to ship different things. It’s part of what makes shipping fun.[8]

And by 2018 yesmyjiin posted that:

To be honest, I’m scared of the moment when Blake will be officially dating someone. Because I know that no matter with who she’ll end up, the fandom will become a battlefield.[9]

Some felt it puts too much focus on shipping within the RWBY fandom, with Gemtail commenting on Reddit:

Ships are fun. Ships are also in personal taste which needs to be respected. RWBY is trying to tell a story that promotes peace, not a ship. Do not lose sight of what this series is about. Bumblebee or blacksun, it does not truly matter.[10]

However there has also been those frustrated with the discussion surrounding the ship war itself, as Anti_Logic stated on reddit:

I don't care much about RWBY FNDM outside this sub, but just here I've seen overwhelming more whining about an apparent shipping war I must be missing. Cos I'm not seeing much about the war itself. There's been a spike in bumblebee and black sun fanart, which is awesome.

I'm getting way more bored of the whining about the "war" then I am about anything else.[11]

adrestianknight similarity notes on tumblr that there is too much emphasis on the shipwar is by non-shipping fans:

the “shipwars” in rwby are blown way the fuck out of proportion and are at the same time a self-fulfilling prophecy [...] anytime anything substantial happens, you get a billion people, who don’t ship either thing, anticipating completely ridiculous reactions from both sides, and using any examples of that happening to make their point–as in they look for drama and use it as evidence for a ~massive shipwar that ruins the whole fandom for them~ as if they can’t just ignore it.

like seriously. just don’t read silly youtube comments or go into the tumblr tags for ships. it’s not that hard. anyway thanks for coming to my TED talk, people who complain about shipwars in rwby are off the mark most of the time.[12]