Blake/Yang, also known as Bumbleby, is a RWBY femslash pairing involving Blake Belladonna and Yang Xiao Long. While popular from the start, canon basis for the relationship led it to grow to the most popular ship in the fandom.

Blake and Yang are teammates in Team RWBY and partners. During the Beacon Academy Initiation, Blake appears to be following Yang through the forest. They then fight together, and both become a part of team RWBY. Blake and Yang and one of the pair in the team, and Ruby and Weiss are the other. The two girls seem to get along well, although due to Blake's quiet personality, they don't talk much. By the time of the festival, the two have a stronger bond.

When Blake is revealed to be a Faunus and runs away, Yang defends her and insists that the team track her down.

During the Battle of Beacon, Blake's ex-partner Adam Taurus attacks Blake and claims he intends to take away everything she loves, starting with Yang. After seeing Blake get stabbed in the abdomen by Adam, blinded by rage, Yang attempts to attack Adam for hurting Blake. Adam easily defeats Yang by severing her Yang. Blake grabs Yang and runs. After having retreated to safety, Blake reaches out for Yang, apologizing and crying. After the Battle of Beacon, Blake runs away without a word, which wounds Yang even further. Post-timeskip starting in Volume 4, Yang mentions on several occasions that she doesn't understand why Blake left, and that she felt betrayed because she had needed Blake to be there for her. 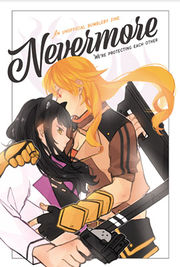 The two reunite when Blake rejoins the team. Yang is still suffering with PTSD and they repair their relationship slowly, with Yang still expressing anger that Blake left, and wanting Blake to view their relationship as one between equals.

In Volume 6, the two again face Adam, who has been stalking the group. Adam ambushes and attacks Blake, but Yang arrives and they are able to fight him together. They say they are not alone and are protecting each other. They hold hands, and Adam seems particularly angered by their closeness. The two fight and eventually kill Adam, then embrace. They later hold hands on the airship.

Their romance seems to become more explicit in Volume 7, with the two frequently having small displays of affection and reiterating that what they'd gone through together had brought them closer.

Blake/Yang were one of the first ships to emerge from the early RWBY fandom, alongside Ruby/Weiss, following the release of their character trailers. Their ship name, Bumblebee, comes from each of their respective color themes of black and yellow. Fans began to use the spelling "Bumbleby" more frequently. The "-by" references Blake and Yang, and the unique spelling can be found more easily in searches. Somewhat confusingly, Yang's motorcycle is also named Bumblebee.

The ship saw a major boom in fanworks and discussion after volume 3's finale due to Adam claiming he would destroy everything Blake loved, "starting with [Yang]." This led to Yang losing an arm, Team RWBY splitting up, and Blake leaving without saying goodbye. While the ship had always been popular before this point, there was a shift in how some of the fandom saw Bumbleby, as they now felt there was a serious potential for them to become canon. The parallels/contrast between Adam and Yang's relationships with Blake seemed to be more pointed.

The rise of Bumbleby also brought about more intense shipping wars between Bumbleby and Blacksun, another Blake ship that fans believe is or may become canon. Blake was traveling with Sun while she and Yang were separated, adding to the bitterness from Bumbleby fans. Furthermore, in V5 Blake's former friend, Ilia, reveals to Blake that she used to have a crush on her. Blake apologizes for not feeling the same way – Bumbleby fans despaired that Blake was indicating that she didn't like girls at all. On Yang's side, there is much discussion of whether the feelings Yang expresses while she and Blake are separated are subtextually romantic or simply strong platonic feelings. Some believe that Yang's romantic feelings for Blake are canon, but unrequited.

A similar increase in fan content occurred in the run up to volume 6's finale[1] as Blake and Yang once again fought Adam, this time coming out the victors. Some fans thought that their declaration to protect each other, Blake mutually reaffirming to Yang that she wouldn't leave again and their physical closeness during and after the battle was canon proof of their feelings for one another. Others believed that while it wasn't canon yet, it was now being set-up to be explored in future seasons. Additionally, there are fans that do not see their interactions as romantic.

After Volume 6 opinion shifted again, and by the time Volume 7 started many viewers, even non-shippers, expected that Blake/Yang would become canon soon.

Like many modern production companies, Rooster Teeth is aware of the activity of its show's fandom, including RWBY. This has lead to several interactions with the Bumbleby shipping community which some fans see as light-hearted ship teasing or nods to the fandom, while others view it as queer baiting.

Some early instances of this include:

Following volume 6, interactions with the official social media accounts and various members of CRWBY tend to be seen a validating, rather than baiting, though many will still argue the point that remains baiting until the couple is officially canon.

CRWBY has also been accused of queerbaiting and failing to deliver on promises of major LGBT representation. Fans have become increasingly unhappy with the many interactions with Rooster Teeth and the show's creators that seem to support Bumbleby while it has not been made canon.

There was controversy over the release of the song "Bmblb" in the Volume 4 original soundtrack. Like all of the original soundtracks, the song was created by Jeff Williams. Fans were delighted that the romantic song clearly referenced the Blake/Yang ship name, and took the official song as confirmation that the ship was canon. However, Rooster Teeth employees responded by saying that the songs was made without their involvement, was simply a dynamic that Williams wanted to explore, and did not indicate canon romantic feelings between the two.[8]

Many fans still regard the BMBLB song as the ship's anthem.