The Raven Cycle is a series of Young Adult urban fantasy novels written by Maggie Stiefvater. The series is composed of four novels:

The series is available in audiobook form and has usually been well-received critically, winning a number of awards and accolades. The author commented that while not being the one to sell the most among her series, it is the one with the most active fandom presence.

On April 10, 2017, Tor.com published an article stating a TV adaptation was in the making.

The series focuses on the meeting and adventures of Blue Sargent with the four "Raven Boys" Richard Gansey III, Adam Parrish, Ronan Lynch and Noah Czerny, so nicknamed because they wear the uniform of the nearby all-boys private school Aglionby Academy.

The series follows Blue and the boys as they are pulled deeper and deeper into Gansey's quest for the mythical Raven King along the ley lines of the world. It deals with fantastic and magical themes, tropes of forbidden love and star-crossed romance, but also more prosaic concerns such as figuring out one's sexuality, looking for one's family, poverty and privilege, drug abuse, physical abuse, death, grief, mental illness etc.

The books also feature a cast of secondary characters including the psychic women who make up Blue's biological and chosen family, the boys' families and some of the staff and students of the Aglionby Academy.

The fandom is most active on Tumblr, where fanfic, fanart, headcanons, edits and meta are regularly posted. TRC is popular among the "aesthetic side" of tumblr, a good chunk of fanworks consists of minimalist edits, gifsets, and photosets, and some consider it Dark Academia. Meta discussion and theorizing is also very common, given the "mature" themes present in the books, as well as the numerous subplots and Maggie Stiefvater's passion for unexpected twists and foreshadowing. Meta about the former tends to have a high chance of generating wank. As with most tumblr-based fandoms, shorter works and askfics get posted on tumblr, while longer fic is posted on ao3 and then shared on the author's tumblr.

The most commonly written pairings are:

A variety of other intra-Raven Boys ships exist, but they mostly show up in headcanon sets and visual fanworks on tumblr (more "casual" fandom activities). Poly ships are more common than in other fandoms, due to the book showcasing a variety of very intense friendships between the main group, who are also shipped in OT5 form. Another example is the Blue/Gansey/Henry OT3, which replaced Bluesey for some fans after TRK.

Popular general tropes in fic include friends to lovers dynamics, hurt/comfort and mundane AUs. A lot of stories play up the fairytale and magical realism elements of the books, or focus on the chosen family aspect. After the series ended, there was a wave of fluff-y curtainfic about the main five's lives after TRK, compared to more plot-heavy works from before.

The author is active in social media and has commented about some of the meta issues raised by the book's fans. For example: Tumblr post about racebending Ronan and the book's failings regarding ethnic diversity, posted to her Tumblr in June 2015.

I debated about posting about this, because it’s a subtle and difficult issue, and I don’t want to tell the Raven Cycle fandom how to live their lives. I don’t want to hamper creativity or enthusiasm. 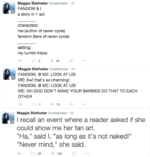 Screencap of the author's tweets about her own fandom, posted by the author on her Tumblr, August 2015

She has also written about her own peculiar position as a sometimes unwilling participant in her own fandom, and the challenges that this poses:

I’m going to try to say this in a way that I hope doesn’t crush feelings; I appreciate the enthusiasm for the series and I don’t want to hold it under the water until the bubbles stop, etc. etc.

My inbox and Twitter feed are pretty adventurous places at the moment: basically, readers are asking me to participate in fandom in ways that I not only can’t (I can’t read your fanfic for legal reasons) or don’t want (I do not belong in my own fandom). Readers are asking me to confirm headcanons and provide extra-canonical material and asking for things to appear in the last book. Additionally, I have some messages about the content of the tag. [...][4]