Dark Academia is an aesthetic and genre in media, most commonly found in literature, that is associated with certain themes:

Dark academia stories generally contain tragic elements. It is associated with intellectuals and academic prestige, or at least the appearance of intellectualism.

In fandom, it is common to focus on the theme of repression, specifically that of sexual identity or as a metaphor for sexual identity. This theme is often related to period-typical homophobia.

Dark academia is a sort of shared fandom for many works, mostly books, that are associated with the genre. However, The Secret History by Donna Tartt is likely the most influental one. [2]

How central is this book, The Secret History, to this community, that's what I want to know. Is this just a fandom masquerading as an aesthetic community?

There is a duality within Dark Academia which means that modern works that incorporate the Dark Academia themes will be recommended alongside well-known (mainly) European classics. [4] For example Dead Poets Society is an important movie in Dark Academia, but one could easily make the argument that the texts they study in the movie would qualify as Dark Academia as well. This means the categorization of which works count as Dark Academia is often debated. 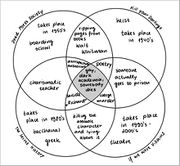 A venn diagram of where some popular Dark Academia works overlap. By lets-throw-bacchanal

Dark Academia has a strong footing on TikTok, Instagram and Tumblr. On Tumblr, it exists somewhere in the realm between being an aesthetic, a lifestyle and a fandom. Posts meaning to act as Dark Academia resources will give tips on how to dress, how to excel academically, and what works of media fit into the subculture. [6]

This also means that the ways of expression differs from many other fandoms. While there is fanart and fanfiction, there is also an abundance of aesthetic photography. Since a lot of Dark Academia is about emulating aspects of the Dark Academia characters, it is also common with photography of outfits inspired by them.

While some of the stories in Dark Academia deconstruct the fantasy they depict, its concepts are still widely romanticized by fans. As a result, Dark academia has been criticized for being white, male-centric, and classist, and for romanticizing such themes without challenging them. [7]

donna tartt: *writes an entire cautionary book about the hubris of characters throwing a bacchanal and then going crazy, losing their friendships, falling apart and destroying the rest of their lives as a result of this decision*

me, immune to critical analysis: i want to throw a bacchanal [8]

I realize I talk about this constantly but can we talk about dark academia? I just cannot get over how people on here are so enthralled with having a flimsy excuse for racism and classism by way of ‘dark academia’ they just completely ignore metaphors or clear textual evidence of these books being satirical (the biggest example being, of course, The Secret History by Donna Tartt).

There is a huge amount of racism surrounding dark academia, from the satirized explorations of white upper class society to arguably unconscious racism on part of many authors in this genre, as well as readers. And I’m not just talking about the moodboards, and the edits and what have you, though it is clear what so many of the people creating these edits think about beauty and who belongs in academic spaces— take a search through the dark academia tumblr. How many of these edits have a single person of color in them, how many of these edits are about beauty and terror? How much do you want to bet people consciously see people of color as unfitting for (dark) academia, or are they just unconsciously racist in a space that doesn’t explore and analyze why dark academia is as white as it is, and why we associate whiteness with beauty so easily?

All of this is true and infuriating, don’t get me wrong. But what I want to talk about when I talk about racism (and classism, to an extent) is the unconscious values eagerly thrown around without thought or analysis.

People are desperate to be like the main characters of The Secret History (a satire, may I add! I’ve said this three times but The Secret History is a satire! It is not serious! Why do so few people know that!) without any thought as to these characters’ values. Studying the classics without critique or self-awareness isn’t something to aspire to, nor is being classist and racist and holier-than-thou. To worship dark academia— the classics, ancient Greece and Rome, the canon of white male authors from England and France and the United States— is to adhere to racist morality.

Dark academia is by definition a cautionary tale- why is it that these protagonists or their friends always seem to end up bringing about their own downfall, dying or ending up miserable by the end of the tale? Why is it that not one self-absorbed, ‘eurocentric upper class’ literature obsessed protagonist doesn’t have a happy ending? It certainly isn’t because the narrow and often racist teachings they adhere to taught them well.

And yet we still worship these protagonists. We still obsess over the ideas of the Greeks and Romans, the painfully white and painfully male Western literary canon, without any sort of critical thinking. I’m not here to say you’re a bad person for enjoying the classics, I’m not here to say you can’t enjoy the classics- I enjoy the classics! I am saying that you cannot enjoy these things without thinking critically about why they are so popular, why you immediately gravitate to the idea of wealth and whiteness, and why you take certain aspects of dark academia— the aesthetics, the education, the Ivy League certainty and ego— without thinking about any of the rest of it, such as the cautionary tales weaved into almost every story in this genre.[9]

Some defenders of Dark Academia argue that it is actually more accessible than other subcultures due to the accessibility of the fashion and literature associated with it.

Though it can sound niche, part of Dark Academia’s appeal is the fact that it is both more approachable aesthetically than other popular internet subcultures — one example being Cottagecore, the internet aesthetic inspired by a romanticized interpretation of rural life — and also emphasizes inclusivity and gender fluidity.

To be part of Dark Academia, you don’t have to have access to a country house, a field of flowers, a big kitchen for baking or an expensive prairie dress. Most of the clothing Dark Academia fans wear is vintage and can easily be found in secondhand stores or sites. [2]

There are also those who do no consider dark academia a real sub-genre at all and find its characteristics too subjective and meaningless.