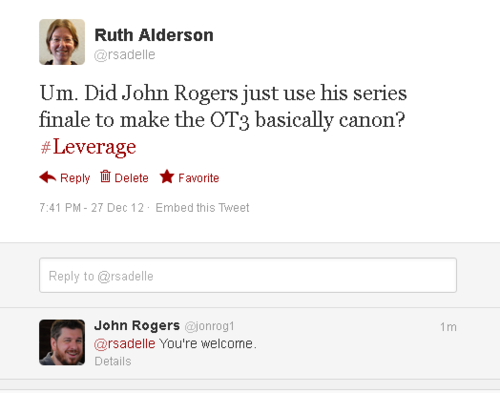 While the OT3 didn't go explicitly canon during the show's run, many fans read subtextual evidence for their relationship in the canon.

Shortly after the series finale, one fan tweeted, "Um. Did John Rogers just use his series finale to make the OT3 basically canon? #Leverage," and John Rogers (co-creator of the series) replied, "You're welcome."[6] Some fans have interpreted this as word of god confirmation that the ship is canon.[7] Others are still unsure, or vaguely confused.[8]

In 2016, John Rogers had the following interaction with a fan in a much less well-known tweet:


If I could, I would edit the definition of "Rude" to include "John Rogers - The Long Goodbye Job" @jonrog1


@shellygurumi hey, we made the OT3 canon. That should buy us a little back.[9]

Fandom of the OT3 is also active on Tumblr.