From Fanlore
(Redirected from Zeneyepirate)
Jump to navigation Jump to search

Zen, who wrote with her sister Nancy as Zen&nancy and who vidded as Zeneyepirate was a fanfiction writer, vidder, slasher, punk fan, and general bad ass as well as the sweetest person who might, conceivably, kick you to death. A writer in classic slash fandoms such as The Sentinel, Highlander, and Due South, Zen with her sister Nancy founded the House of Slack, home of their fanfiction as well as a site that was part of the Renegade Slash Militia, and they also operated Zen&nancy's Internet Homeless Shelter and Soup Kitchen, which hosted many other writers of the time before they got their own sites, people like Mairead Triste, Bone, Resonant and Luminosity. 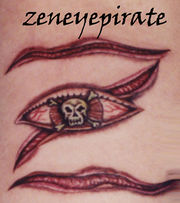 Zen went to the first Vividcon and was a regular thereafter, having been bitten by the vidding bug. She made many notable vids for Hard Core Logo, a fandom that combined her love of slash, punk, music, and Canada, including "Monster" and "Ghost". She also made several vids for Leverage and Hustle as well as in other fandoms. A devoted fan of Vin Diesel's, she made "Close to You" as a kind of comic horror vid for Pitch Black. Many of her videos are listed in the Vividcon Data Base and most are available for download at her vid page Zeneyepiratevids.com.

She branded her work with her Zeneyepirate logo.

In August 2015, an informal Vividcon vid show was held to showcase the breadth of her fanworks.