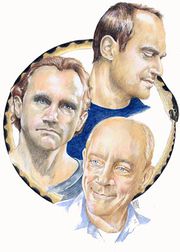 Art by K9 The caption reads "Keller, Beecher and Schillinger in their never ending spiral of love, hate, pain, and death"

The Oswald Maximum Security Penitentiary - abbreviated as Oz - is the setting for a gritty narrative drama concerning the inner workings of prison: the trials and tribulations of hardened criminals mixed in with the odd white-collar felon, corrections officers, and all of the daily support staff (medical doctors, administrators, priests and psychologists). The main focus is on an experimental unit known as Emerald City, which, instead of traditional cells with bars, features "pods," which are cells separated by and enclosed in Plexi-glas. The emphasis in Em City is on rehabilitation, education and learning responsibility during incarceration, as opposed to pure punishment.

A dark, addicting drama, the show offers scathing social commentary and has been likened to a testosterone-fueled soap opera including dozens of intersecting story lines following inmates and staff alike.[1] It's also well-known for keeping its characters layered and multi-dimensional, and for forcing viewers to see past inmates' crimes; it's an odd feeling rooting for the sociopath, but Fontana's writing portrays humanity in each prisoner, and it's difficult to discount that connection.

There are a number of popular pairings in the fandom, including Miguel Alvarez/Father Ray Mukada (B.D. Wong) and Tim McManus (Terry Kinney)/Sean Murphy (Robert Clohessy), though the main focus tends toward the canonical pairing of Toby Beecher/Chris Keller (Christopher Meloni), with appearances by antagonist Vern Schillinger (J.K. Simmons), who is both Beecher and Keller's arch-nemesis.

Fanfiction for Oz runs the gamut from fluffy schmoop to angsty darkfic and everything in between. AUs are particularly prevalent, with many crossovers with shows such as Law & Order: SVU or Wanted (TNT). While slashfic is the norm, there are plenty of gen offerings and a tiny but expressive femslash corner.

Unit B is the fandom's current archive. The site is an automated, general-issue archive for any and all OZ fanfiction about any and all OZ characters. Crossover fanfiction between OZ and other shows/fictional media fandom entities is also accepted. This archive accepts slash, het, and gen stories rated through NC-17.[2]

Also hosted at slashcity.net, EmCity used to be the fandom's largest archive, although it was abruptly closed shortly after a flamewar erupted on the affiliated mailing list. Conflict arose over the predominance of Beecher/Keller fic, primarily because many fans believed that stories not featuring B/K or stories featuring other characters, period, weren't welcome or appreciated by the fandom. [3] Some fans hosted their own websites for their personal Oz fanfiction, such as Brian's Oz Fan Fiction site, started in 1999 and ending in 2006.

Some fans know that flamewar by the name "the B/K wars," when approximately half of the fandom hated the Beecher/Keller pairing and felt it got too much attention. The B/K contingent split off and created their own archives, mailing lists, LJ communities and so on.

Shortly thereafter, a new mailing list and archive arose: Cellblock 5. While the site is still accessible, most of the links no longer work. However, most of the fiction is accessible and can be located through Suespur's C5 List.

For a long time, most fics were posted to mailing lists: Cellblock 5, Twisted Sisterhood, and TSXF (the fic-only sister list of TS). Currently, there are several active communities on Livejournal for either posting or announcing fic and art, a drabble/flashfic community, an annual Oz Big Bang, an annual holiday fic exchange, and several other attractions ranging from Drabble Trees to the Graffixation reverse art-fic challenge. Please scroll down for additional information & links, or refer to The Great Big OZ Resource List.

Oz vids also run the gamut, although the majority tend to be focused on the Beecher/Keller relationship. However, many vidders are dedicated to all of Oz, and therefore all of Oz's characters, and their vids reflect this with gen, character-driven pieces, crossovers, etc. Naturally some are traditional slash vids that focus on the sizzling chemistry between characters, while some focus on the crippling isolation of prison, its many injustices, and the filter of an internal social strata lens.