Sammy's Drunken Letters to Stephen King is a series of letters purportedly written by the character Sam Winchester to Stephen King while drunk. The letters take issue with Stephen King's factual and logical errors in describing the supernatural world.

"Some people dial old friends or enemies when they're drunk. Sam is a literary minded boy and has to take things a step further.

Sam's first drunken letters were crumpled and thrown away, but of course Dean pulled them out of the garbage, and he keeps them all in the bottom of his bag. For rainy days. 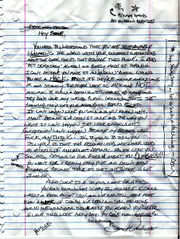 Hey Steve, You need to understand you are irreparably harming the world with your incorrect suppositions about the dark forces that pervade this plane.....the resurrected never are used as vessels for malevolent demonic power like you showed, demons go for fresh meat you dumbass!" 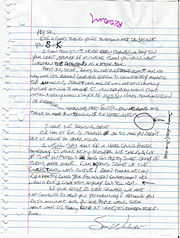 The Shining. Dean has written "Redrum" in pink ink at the top. Click to read

"..Sam was pretty mad about that book, so Dean saved that one too. The circles and arrows are his."

"I can tell you've never been psychic a day in your life....First off Steve, Danny was prepubesentscent and no way was his brain developed enough to cognitively address the anomalous perceptions and he was not emotionally mature enough to handle it." 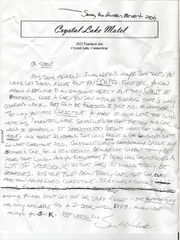 Christine. In the upper corner Dean has scribbled: "Sammy the drunken pervert, 2006."

"Sam just can't leave Dean out of his business, especially when talking about cars. The strikethroughs and comments, as usual, are Dean's."

"...you can attach a curse to an inanimate object but they CAN'T be possessed. Like a car. You can attach things that's why charms work. They can't be possessed or just evil or whatever....Dean has sacrificed A LOT OF VIRGINS [in his car]. It should totally be possessed." 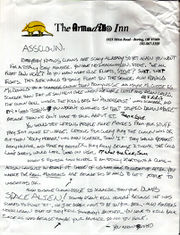 "Everybody knows clowns are scary already so yet again you went for a totally easy monster. You have no imagination, Steve. "We all float down here." Do you know what else floats Steve? Shit, shit floats. This book would totally float in the sewer." 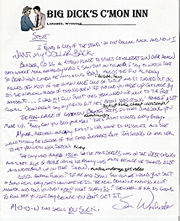 "Sam weighs in on The Stand. As usual, all inserted comments are Dean's."

"I found a copy of 'The Stand' on the dollar rack and now I WANT MY DOLLAR BACK. Boulder, CO is a rotten place to start civilization over again that's where Mork and Mindy lived I saw that on TVLand, I try to watch that so Dean won't catch me watching porn (Dean: Too late Sam)...Also, Randall Flagg? If me and Dean saw him, we'd just salt and burn him easy, that's how lame he is. The real demon we know is a lot meaner and don't you know what scary is? The wheel of Ka is going to roll over you one day cause you don't get it. M-O-O-N spells YOU SUCK!" 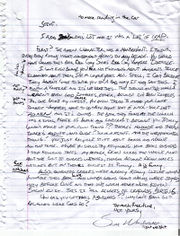 "Salem's Lot" letter. Dean has commented: "No more reading in the car" at the top.

"First? The main character has a manservant. I think every body knows what manservant means in any decade. You should have called this book "Big Gay Steve's Big Gay Vampire Boatride". I can't even blame you for not knowing about vampires since I just learned about them a couple of years ago. Still, I can't believe they haven't come to suck you dry if they saw this [book]." 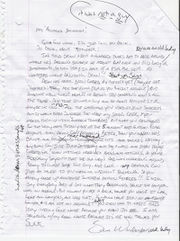 "Hey 'Richard Bachman', Good fake name, I'll just call you Dick. So Dick, about 'Thinner'...I've told Dean a hundred times not to mess around while he's driving because he might run over an old lady (Dean: You are on old lady.) or something, so this story is sort of a PSA for him. No handjobs while driving Dean!! (Dean: Shut Up Sam).

The letters were featured on the CW's November 2006 official blog post "Reasons to be Thankful: Supernatural":"It seems our Sammy doesn't like all the factual inaccuracies on the horrormeister's literary oeuvre. Start at the bottom and work your way up - they're loads of fun. Oh, just a warning - there are some naughty words sprinkled in a couple of the letters, so don't read them if you think you'll be offended." [1] One of Sam's letters was used to create a Television Without Pity forum thread for Supernatural fan art called: "Supernatural Fan Art: You know what else floats, STEVE?"