You may be looking for Fantazy, a multimedia zine.

Fantasy is a gen Star Trek: TOS and some multimedia anthology with twelve regular issues and one special edition called "Fantasy LTD".

It is a sister zine to Plak Tow.

Summary from the publisher: "...in true Blood Fever tradition. Step past the threshold of reality and travel through time and space to a place yet unknown to mankind of today. Be there as Make-Believe becomes reality."

Fantasy 1 was published in January 1983 contains 46 pages. It is a Plak Tow extension novel by Bonnie Guyan, illustrated by Christine Myers. It's focus is Spock. 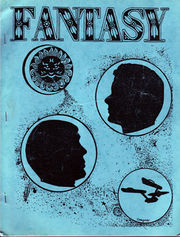 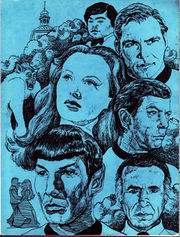 "What you call the world of Star Trek goes far beyond the imagination. The mind of a true genius gave birth to the original concept, but thousands of fans have documented and created such detail that the world of Star Trek has crossed from make-believe to a reality of its awn. Join a young writer as she steps past the threshold and travels through time and space to a place yet unknown to mankind of today. It is there that both you and she will first meet an officer of the U.S.S. Enterprise..." [1]

Fantasy 2 was published in January 1983 and contains 43 pages. On the cover: "Remember Rodenba" and has the subtitle: 'How Do I Love Thee'. It is a gen hurt/comfort novella with a focus on Dr, McCoy. Front & Back covers & 6 full-page interiors by Christine Myers. 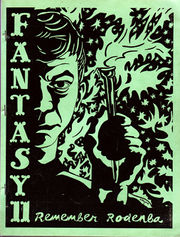 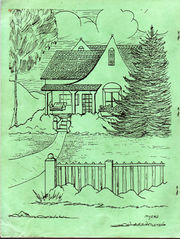 "The blood fever still burns in this novel. Let your fantasy mingle with this McCoy romance. Excerpt: 'Spock... wait up a minute,' McCoy caught up. 'There's something I wanted to ask you ... I'd like to know if... a... if you'd stand up for me at the wedding... be my best man.. you know,' he fumbled."[2]

"A shuttlecraft crash sends McCoy and Spock into a mysterious world where the Doctor finds a young woman who he loves and lends to his decision not to return to the Enterprise." [3] 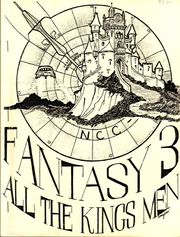 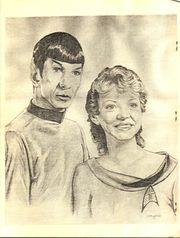 back of cover #3, Christine Myers

"Imagine the times of old when knights were bold and kings and queens ruled the world from their castles and dungeons. Now, imagine a Spock/Chapel romance set in these surrounding."[4]

"Following the supposed death of the ship's First Officer, McCoy joins with Kirk to unveil a mastery of disguise. A romance set in the times of knights of old when kings and queens ruled the world from their castles and dungeons.[5]

I had mixed reactions to this fanzine. While the Chapel-Spock love story is pleasant enough and the angle certainly different, I might have wished for a stronger action line, and more adventure. It is passably well-written, and the artwork by Christine Myers is attractive. Chapel does come across as a strong character, but one might wish she had something more to do. For those of you who prefer a story line closer to the established ST universe may find the improbabilities in this story hard to live with. For those less worried about such details, you might find this interesting.[6]

Fantasy 4 was published in April 1984 contains 50 pages. It is subtitled: "The Kinship." The art is by Christine Myers. It is a story about the families of Spock and McCoy – including Spock’s sister and Dr. McCoy’s half-Vulcan daughter Dr. Joanna McCoy. Author makes it easy to pick up this story at Chapter 6 even if you don’t have the earlier issues. 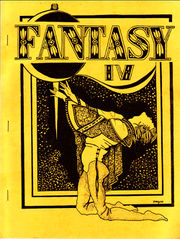 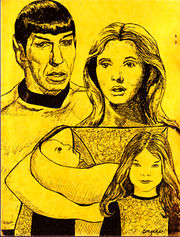 "Less than a week after the final declaration of McCoy's death, a sub-space message arrives requesting that Kirk be present at the memorial service in the doctor's home town. The request came from none other than Joanna McCoy, Bone's daughter. This fanzine is included with the purchase of The Kinship while supplies last.[7]

"Spock and Kirk are requested by Joanna McCoy to attend the memorial service for her father. A difficult time for all until word comes that the doctor is alive. Their joyful reunion is interrupted by an adventure that threatens all of their lives.[8] 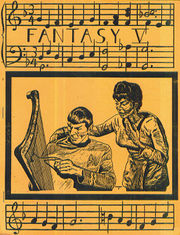 "Return to Vulcan to find out what Finagle's Law is really all about in the 'After the Series' look at 'Amuck Amock.' Plus, the music and poetry of Star Trek comes alive in this issue. Tunes you've all heard on the show are here for you to play. Music written for keyboard and guitar." [9]

Fantasy 6 was published in 1987. "Aaron IV, one of the most beautiful plantets in the Beta Sector of the galaxy. The peaceful home of a nomadic people known as the Cainjack. Brown-skinned with dark hair and eyes, they resembled what most would think to be an American Indian of the planet Earth. One of the Coinjock's tribes was known as the Mantea, and this is where the first of three legends begins. Join the Enterprise in three separate stories: 'Shaman,' 'Manto,' and 'The Legend' as we take a look back at the Native Americans of yesteryear! Even those of you who shy away from Indian legends will want to have these McCoy adventures." [10]

Spock's mind has been wiped clean by the mind-sifter and he is about to be placed in a sanitarium until he can be transferred to Vulcan. Ue learn of the events that led up to the tragedy and we are with McCoy as he bids a gentle farewell to his friend. Months later, Kirk and McCoy return to Vulcan uhere they accompany a partially recovered Spock on a trip into the mountains. Their adventure endangers McCoy's life, but helps restore Spock's memory and leads to his return to the Enterprise.

See reactions and reviews of Rape of a Rock.

Fantasy 8 It contains a single novel called "Whalehead." It was published in 1987 and contains 53 pages. 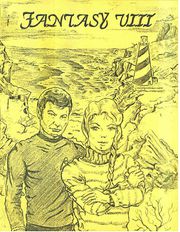 "Journey across the span of three hundred years as yesterday becomes tomorrow. Join McCoy as his future becomes his past. Excerpt: 'With every fiber of my being, I want to stay here at Whalehead... but I want you to realize that the world I come from and your world of today contain a lot of similarities... but just as many if not more differences.[11]

" As the result of a shuttle accident, McCoy along with Kirk and Spock are transported back to a coastal village of the Twentieth Century. Withaut hope of rescue, they finally face the reality of facing a future in a frightening new world. McCoy's future has become his past though, as time no longer becomes a constant.[12]

Fantasy 9 was published in 1988 and contains 47 pages. "For those who loved Fantasy 8 and the story 'Whalehead,' here's the sequel you've been waiting for. Interest piqued by the unanswered questions the Enterprise crew found in the 20th century New England? Well, here are the answers, and they're beyond anything you could have ever imagined. So, if lighthouses and surf-pounded beaches tantalize your imagination, you won't want to miss 'Whalehead Revisited." [13]

"Lighthouses and surf-pounded beaches continue to tantalize the imagination in the sequel to 'Whalehead'. Unanswered questions the Enterprise crew found in the 20th century New England now come to light with a blinding force. McCoy's past has come forth to haunt his future." [14]

Fantasy 10 was published in 1988 and contains 48 pages. It is the final issue of the regular issues. It contains "Duplication of the Heart", the first chapter which appeared in a previous issue. It is a love story involving a transporter malfunction. 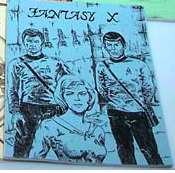 "A mystery involving Spock, Christine and McCoy. Excerpt: "'In the middle of the floor, Spock lay, the carved handle of a dagger protruding from his chest. "He's dead, Jim," McCoy spoke up, continuing to kneel helplessly beside the body. "There wasn't a thing I could do..."' But what Spock has been killed?" [15]

"Dungeons and thrillers unite as the first chapter that originally appeared in Plak Tow combines uith its long auaited exciting conclusion. When superior beings interfere with the crew of the Enterprise, McCoy is drawn in as a spectator to witness the mysterious bonding between Spock and Christine Chapel. But...which Spock? [16]

Fantasy 11 was published in 1988. It is a sister zine to Plak Tow and has the subtitle, "The Best of Plak Tow 1." On the title page, "A Plak Tow Extension." All fiction is by Bonnie Guyan. 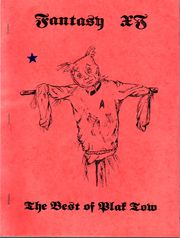 "The first of the Best of Plak Tow Series. And this one is starting out with a rib-splitting collection of the funniest Star Trek stories you could ever imagine! In one of Rayelle Roe's tales, we find Spock and Kirk taking lessons in milking a cow! ... while Carol Mularski has us visit a world where spoken language is music -- more or less. And to top it all off, Cheree cargill gives us an hysterical, verbal cartoon of the Star Trek crew. Plus three other stories that will have you rolling when you see the world of Star Trek through the eyes of laughter." [17]

"The second of the Best of Plak Tow series. Spock/Chapel fans, here's a mystery/romance you won't be able to pass up. Translated from one of the ancient Plak Tow fanzines, it's being presented once again for the world of fandom to enjoy. Excerpt: "The cave was shallow, but it provided the shelter he searched for, and Spock carefully placed Christin's unconscious form on the ground..." Enjoy the touch of Toni-Cardinal Price in "The Moon of Trius 2." And for McCoy fans everywhere, the "Circle of Fire" has been rekindled. A far beach, touched only by the moon and a circle of fire creates the place where emotions long hidden are finally freed." [18]

I have read a lot of Bonnie's things and really enjoyed her Kinship series. That is why I was looking forward to reading FANTASY XII. I was both pleased and disappointed with the zine.

It is basically a two story zine. The first story, "Circle of Fire," written by Bonnie, made me want more. What happened afterward? What happened with Spock and McCoy? I wanted the entire zine to be a continuation of that story. I guess that's the way I am, give me a good Spock-McCoy story and all I want is more. Please finish it, Bonnie.

The second story, "The Moon of Trius X-2", was written by Toni Cardinal-Price and first appeared in Plak Tow 1, 1978. I am fairly new to fandom and have only read Toni's later stuff, so I wasn't impressed. The story was well written, but didn't have much of a plot.

I liked the aspect of Christine Chapel and Spock together on the planet, but the story line has appeared many times in other zines. An outbreak of fever that doesn't affect Vulcans, and an emergency taking the Enterprise away on another mission.

It was a good adventure yarn, and Christine and Spock do work well together, but I wanted more of McCoy, being a devout McCoy fan. I enjoy the banter between McCoy ( and Spock and when McCoy had to go away with Kirk, that aspect of the story was missing.

If you like adventure and if you like Christine and Spock stories, you will like this zine. Personally, Bonnie, I want an entire zine based on the first story, "Circle of Fire".[19]

A novel written by B. Guyan that combines ST with the actual folk lore of the Outer Banks of N.C.! Don't miss the real adventures of Whalehead. AND, in conjunction, a second novel unfolds as McCoy encounters a past religious figure - a black and white penguin of the past - in a world of the future.

This is the final issue of the FANTASY series.