Plak Tow is a gen Star Trek: TOS anthology edited by Bonnie Guyan. Nan Lewis is the cover artist of many issues.

Fantasy is a sister zine. 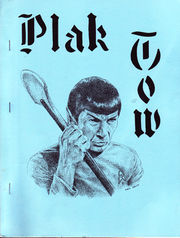 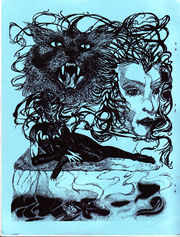 back cover of issue #1, Nan Lewis

[zine]: The opening poem by Bonnie Guyan, 'Blood Rage' makes the reader feel Spock's blood fever and emotions over fighting and supposedly killing Kirk. Another poem, 'I am Along,' tells about Spock's inner conflicts. Dayle Palko has three poems, including 'The Last Night' which expresses the love Kirk and Miramanee and their child, and 'Puzzle for McCoy' wherein McCoy hunts for the reason that is Spock. 'For This,' a story by Trinette Kern, tells of Kirk's death and Spock (finally) turning to McCoy to friendship. 'Lines You'd Like to Hear' by Waterloo is a very funny piece. 'And End, A Beginning' is a story by Ronnie Molnar in which Christine finally gets Spock and a reunion between Spock, McCoy, and Kirk, the latter making a decision the other two expect. Carol Mularski gives a super story in 'The Devil in Music' -- the big E crew turn artistic ambassadors and Spock makes an accidental error in a culture that speaks in musical tones, and a wonderment called 'The Vulcan that Wasn't' about the hypothetical Vulcan scheduled to replace Spock in the Star Trek movie. Kathie Babal gives us 'Aspects of the Stars' -- Shatner and Nimoy astrologically, interesting and informative. 'The Moon of Trius X-2' by Cardinal-Price is a story about aliens planning on using the Enterprise to infect the cosmos. The artwork by Bonnie herself and the other artists is super. And last but not least, are the informative ads. But the inside back cover says it all: 'Thank you Leonard, for giving us Spock. [1] 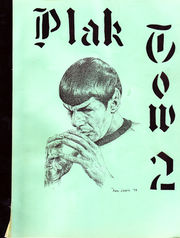 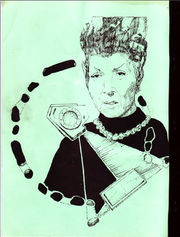 back cover of issue #2, Nan Lewis

[zine]: Bonnie Guyan has done it once again! From the Nan Lewis front cover to Virginia Lee Smith's back cover, this issue proves the 'blood fever' still burns brightly in all of us. The poems by Galli were all very good. 'A Loss of Innocence' by Mularski, illoed by Smith, gives us a child who unknowingly creates a weapon. Babal's 'Universal Father' has Bones trying to explain himself to Joanna, wherever she is. 'Star Struck' is funny, and Cargill's and Smith's drawings make it even funnier. Guyan's 'The Kinship' gives us the possibility of a child BEFORE Spock. Also, her 'Saga of ol' Doc Spock' is a good commercial for Black Label beer. 'Plomeek Soup' brings us up to date on clubs and fanzines. And there is much more. [2] 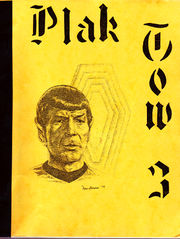 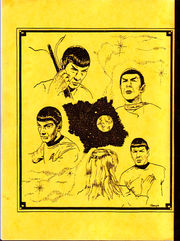 back cover of issue #3, Nan Lewis 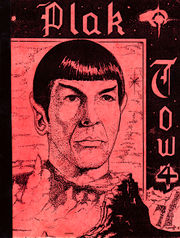 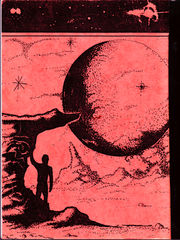 back cover of issue #4, Nan Lewis

Well, as with the best laid plans, something inevitably goes wrong and details undergo last minute changes... Plak Tow 4 being a classic example this time. But, what was going to be great before, is now turning not to be what you had received [as per] a flyer on this issue.. You'll no doubt be able to see where the proposed contents and the actual product differ. No, never fear... SHANEILA will be presented for your reading pleasure next issue. By the way, send me an SASE, and I'll send you the flyer for PLAK TOW 5. It's going to be a SPECIAL EDITION in every sense of the word!

So, now that I've thoroughly confused most of you, let's explain a bit about what you will be seeing in this issue.

Rayelle Roe is back with SURVIVAL OF THE FITTEST, and as before, she has presented our Enterprise Heroes as they've seldom been seen before. Be prepared for some McCoy/Spock bantering that will roll you in [unclear word] seats. Rayelle weaves a fantastic little tale, and the artist that has brought the words to life is equally talented. Evallou Richardson lends her creative ability to us once again, and the combination of these two artists, wizards, gives one dynamic presentation.

And so, thus leaving all my Part I and Part II soap operas to stew on the back burner for a while (... is Spock really croak-city, or can he possibly return to Vulcan and live a normal life through modern psychology...? Tune in next week...), I've included in this issue, a story I've written, that is a favorite. It was published in the last issue of NEXUS, and through the [unclear word] of rights, I'm presenting it to the readers of Plak Tow, with an absolute visual explosion by Virginia Lee Smith. Virginia's time is a bit more limited these days, but she graciously managed to illustrate RAPE OF A ROCK with a flare [sic] that is all her own. Love you, Virginia.... Plak Tow wouldn't be the same without you!

Joyce Tullock rounds out our story-tellers for this issue with SIDE EFFECTS. McCoy/Spock fans, hang onto your hats, cause here we go again. On the opposite side of the emotional coin, Joyce shows us a tenderness an concern that many only leave to the imagination. This is a story that will make a warm shape in your minds eye, and each person must see this mingling in his/her own way. Welcome to Plak Tow, Joyce. Your ability to come into the heart is absolutely gorgeous!

Our poetry corner this time contains four writers whose work we look forward to in every issue. Elen Kobrin, Jimmye Galli, Liz Persic, and Kathie Babal have created a rainbow of thoughts and emotions that blend to present the work even the "I-don't-like-poetry" person can't turn away. Vel Jaeger has added her outstanding job of artist wizardry, in combining texture with words. Vel has a fresh new style, and I'm sure you'll want to frame some of her full page illustrations you'll be seeing in this issue.

By the way, speaking of poetry and artwork... I've been at it again, and the results are scattered here and there. My poetry I present freely, but... my talent in drawing is at best... strange!

Talent... ah, yes... Doug Schiffbauer. Love that cover! Doug is an absolute find in the world of artistry, and I'm proud to have him working with me in Plak Tow. His efforts will come into full bloom next issue...

See reactions and reviews for Survival of the Fittest.

See reactions and reviews for Side Effects.

[zine]: Lots of typos in this zine... but, of course, it was a major job to correct those things before word-processing. 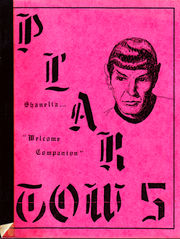 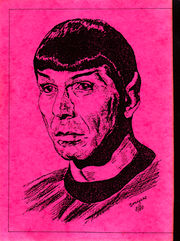 back cover of issue #5, Nan Lewis 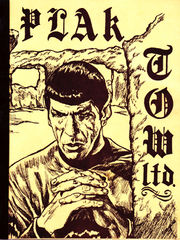 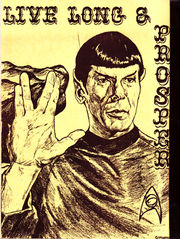 back cover of issue #6, Nan Lewis

Plak Tow 6 was published in December 1980 and contains 83 pages. It is also referred to as "Plak Tow Ltd."

"The Kinship series continues in novel form. Contains Chapters 1 through 4 of the series." 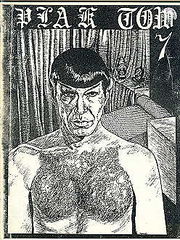 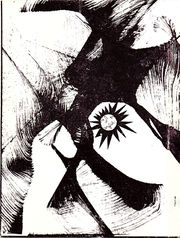 back cover of issue #7, Bonnie Guyan

Plak Tow 7 was published in February 1982 and contains 81 pages.

"This is the raved about and somewhat controvresial story Plak Tow readers have been talking about!" [4]

"The complete novel as it originally appeared in Plak Tow and Fantasy. Savor all seven chapters as Spock finds a sister, and McCoy a love. Span a multitude of years, encounter life, death, and the 'beyond' as never imagined before as The Kinship brings into full view aspects of Spock's life and family, never before imagined in fandom! [5]