Nexus is a gen Star Trek: TOS anthology. There are six issues.

Several fan reviewers of the time refer to some stories as K/S; the contents skate really, really close to what fans today define as slash but were what fans in 1978 were defining as a relationship story, and perhaps what some would call pre-slash or simply smarm.

Nexus 1 was published in February 1978 and has 196 pages. The cover is by Gail Stark. The back cover by Edward Hornlein. The interior art is by Gail Stark, Iris Cruz, Marie Watson, and Mariann H. Hornlein.

The last story is slash. 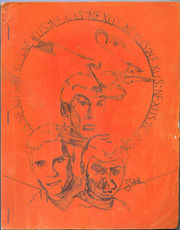 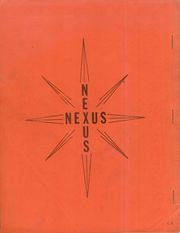 The zine also contained an ad for a writing contest. Winners would win a copy of Nexus #2. Entries were to be no longer than 5 pages single space typed and had to include the following paragraph:

Kirk watched with disbelief as Spock walked calmly into the turbolift. Clenching his fist against the mounting anger, Kirk stormed in after him. He waited for the lift doors to close before he spoke.
"Just answer me one thing, Mr. Spock." Kirk snapped. "Why the hell did you do it?"
Spock turned, lifting one eyebrow in astonishment, "Captain," he said indignantly, "I did not do it. It simply happened."
Kirk looked at him in open mouthed surprise. He leaned against the side of the turbolift in shock. "Mr. Spock, your Vulcan logic never ceases to amaze me."

See reactions and reviews for My Daddy, Mr. Spock.

See reactions and reviews for Trial. 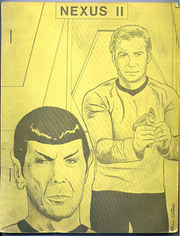 Nexus 2 was published June 1978 and contains 180 pages. The cover is by Maria Watson.

I have only read #2 which seemed to be a mix of stories ranging from the very good to slightly nauseous. My favourite was "Always Tomorrow" by Sheila Clark and Valerie Piacentini. It is a hurt/comfort type of story where Kirk is declared unfit medically to command. Spock and McCoy, told that Kirk only has a year to live, decide to keep the truth from him and all work together in espionage to give him a sense of purpose. There is a happy ending. [3]

Fulfilling the promise of the first issue, 'Nexus' #2 is a first-rate zine which shows a strong bias towards K/S stories -- and good ones! 'Always Tomorrow' is a well-plotted story about Kirk's efforts to rebuild his life after a disabling injury, and Spock's selfless attempt to hide from him the medical report that the injury will prove fatal. In 'No Place Called Home,' the author explores Spock's true feelings for his mother as, after her death, he and Kirk argue, each in his own way, for her right to Vulcan honor. It is well-written and conceived. Teri White again demonstrates her ability at K/S characterization in 'Things They Never Told Me.' When Spock asks Kirk to participate in the lot-rath, a Vulcan ceremony which will formally bind their friendship, Kirk wholeheartedly accepts. but the ceremony involves a desert journey which suddenly becomes a nightmare, and Spock finds himself in a race against time to save Kirk's life. Of the poems, Kobrin's 'Medicine of Life,' is note-worthy as a moving and perceptive analysis of the K/S friendship. Non-K/S stories include "A Matter of Choice,' an unusual love story for Kirk with a unique and sympathetic heroine. The artwork is generally average, but Marie Weston's pictures are superb, and the zine is now offset, a definite improvement. 'Nexus' #2 is a must for K/S fans and is recommended to fans in general. [4] 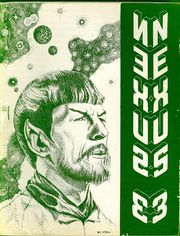 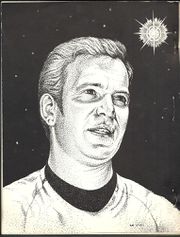 back cover of issue #3, Pat Stall

Nexus 3 was published in February 1978 and contains 266 pages. It has a front cover and back covers by Pat Stall. 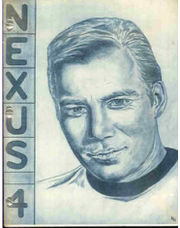 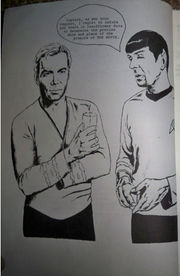 art from issue #4: "Captain, as per your request, I regret to inform you there is insufficient data to determine the precise date and place of the premiere of THE MOVIE."

Portfolio of Poems and Pictures:

This zine is undoubtedly a good buy for its bulk, but its quality is sadly wanting; careless editing with regard to typos, spelling and grammar downgrade it sharply in contrast to former issues. Mimeo is sometimes unreadable. Pages 117 to 138 are used for mostly poor verse and art, but the fiction is fairly equally balanced with 8 medium to long stories and 6 short ones. I tend to prefer tales long enough for the reader to see the characters develop and change, and skilled writer Mariann H. Hornlein offers these qualities and a little more in her "Planet of the Undead" and "Games the Madness." "Planet" combines dungeons and dragons and sword and sworcery [sic] with the ST universe in an entertaining fashion, giving Kirk and Spock an unusual mission. "Madness" puts Spock in the hands of the escaped criminally insane Dr. Daystrom (of "Ultimate Computer"), and makes the First Officer into an unwitting weapon against Kirk and the Enterprise.

"From the Ashes and the Dust" is J. Thomas Ross' newest entry in her Klingon/human marriage series, takes them through some harrowing adventures and opportunities for heroism; very well done.

"The Snare", by Linda Knights, is one of the best sf promise ST stories to appear in some time -- I could wish she would expand it to a novel. The E and crew are trapped "by a strange entity which controls time-space continuum, and Kirk (sometimes alone, sometimes with other members of the crew) is repeatedly thrown into various dangerous Earth times of the past. He/they are always dressed appropriately whether it is World War I under mortar fire, as captives of a cruel Indian tribe, or right in the middle of the Civil War, and the accompanying descriptive detail is a joy. The situations are always grave immediate danger, always require great courage and hard choices. Ending is a bit trite, but after all, the author had to restore everything to normal unharmed, didn't she?

Sheila Clark's interesting "To Fear No Evil" shows the E and crew ESP at its worst, with all of them unwillingly suffering emphatically  the grief and fear of a strange, recently bereaved passenger, Kirk most of all. Spock seems helpless to get through  to her with a mind probe, and it is Kirk's empathy that finally enables them to determine her home planet and get her there for assistance before they all lose the ability to function in their jobs.

In short, if you can put up with poor mimeo, sloppy editing and many trite plots, this one's for you. G-rated. [5] 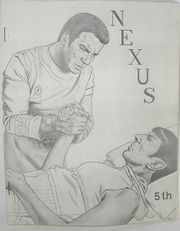 [And to Sacrifice a Galaxy]: Gen, pre-KS (IMHO). Prisoners of the Klingons on Organia with no way out, Kirk and Spock realize they cannot allow Kirk to be submitted to the mind-sifter and try to fight the grim, logical conclusion it brings them to... and are thus forced to acknowledge the true depth of their feelings for each other. Angsty, moving and powerful short story with excellent characterization and introspection. [6] 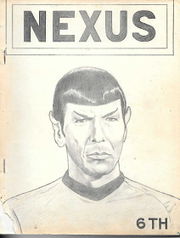 It's very difficult to say farewell to this crazy business of NEXUS, but alas, it seems a parting of the ways is inevitable. To try to continue printing this zine will no longer be possible.