Only Trek is a gen Star Trek: TOS anthology of art, poetry and fiction. 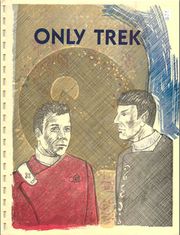 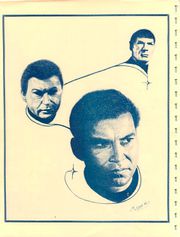 back cover of issue #1, Pat Kilner

[From the editorial:] ONLY TREK is a little late, as you who preordered can see, but, now that you have it in your hands, we think you can see why. When we set the deadline for ONLY TREK, we expected to have 130 pages, but the project blossomed (where did all those pages come from?) and when you're pasting up more than 200 pages—with half-tones, color, reductions, etc.—hours can seem like days. (In fact, they are days!) All seriousness aside, we hope you will enjoy the fruits of our labor (!). ONLY TREK is an attempt to return to the original themes and ideas in the series; to present a crossection of artistic interpretations of Trek. Although the definition of "Trek" is nebulous, and subject to many different interpretations, we hope this zine will satisfy the requirements of "Trekness". (Trekness? Ican'tbelieveIsaidthat.) We have new writers and artists making their debut here, as well as some of the more established names in fanfiction. Of course, LOC's will be welcomed with open arms, and printed in the next issue (even if they say bad things!) We are accepting contributions for ONLY TREK #2. Subject matter is not restricted, although X-rated material may be published separately. The only requirement is that the submission have as its theme one of the basic themes of Star Trek.

As the title suggests, this zine is for Trek fans. It does not contain anything but G-rated stories. There is a color cover, and oddly enough, it is the weakest piece of art in the whole zine. Inside the art is good to excellent and the layout is well done. In the editorial, it is stated that this zine is late because it grew from 130 pages to 200. In my opinion, at least one of the stories could have been left out, and it would have been a better zine for it. The two stories I enjoyed most were 'Second Chance' and 'Where the Resemblance Ends.' 'Second Chance' is pure Trek, Kirk dealing with an alien race, but it is a story as much about the aliens as Kirk and Spock and good science fiction in the bargain. 'Where the Resemblance Ends' is a Trek meets Questor story. Entertaining and it makes you smile. Then there is 'Saturday Night Vulcan.' I couldn't find anything right about it. The characters seemed wrong, the premise was weak, it was too long... The rest of the stories are basically good without inspiring any real enthusiasm on my part. Most focus on Kirk and Spock but some are about McCoy, Uhura, and even about Saavik. If Trek is your love, this is a good first effort, and it deserves a second chance. [2] 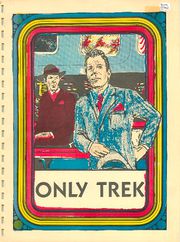 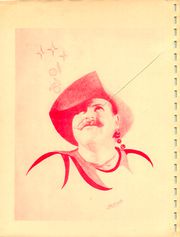 back cover of issue #2, Pat Kilner 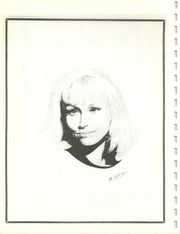 frontispiece from issue #2 by Pat Kilner

This zine was sold at MoreEastly Con and other places. Some fans were quite unhappy about how long it took for this issue to be printed. [4]

[From the editorial]: There is a moment of truth during the production of every zine, usually about two a. m. before the deadline when you wonder whether you are completly, totally insane or not. Upon some reflection you decide yes, of course you are out of your mind, but so what? It's fun! (You think.) We have observed this phenomenon at first hand on several local Texas zines, as well as collecting stories from editors in other parts of the country. But what would life be like without the sound and fury of producing and collecting zines? Only Trek 2 might be subtitled 'the long and short of it' in more ways than one. First, almost every submission we received was either a short-short or a looong story. The LOC's on Only Trek 1 followed the same pattern. A few detailed letters and a lot of brief notes to the effect of "I liked it". For this reason we decided not to publish them - it would have been a bit sparse. To help round out the zine we have three stories that are reprinted from out-of-print zines. Hopefully, many of you will not have encountered them before. (Yes, Mary, I know that's an awkward construction, but have you got any better suggestions?) Sunshine For Sale is from Nexus 5 [5], Symbiosis is from Deck 5 Digest 1, and A Different Kind of Love Story is from Phoenician Star Galley. An interesting mix, we think. Hope you enjoy it. Only Trek 3 is in the early planning stages, and looking for contributors of stories and art. SASE for more information to : Katharine Scarritt.

See reactions and reviews for Sunshine for Sale.