At one point, there was to be an unrelated zine entitled "Deck 5. See Steve Barnes. 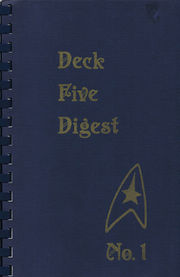 This is one of a type of zine so rare as to be nearly unique, a clubzine (with five persons on the editorial staff) yet does not disgrace itself through total non-discrimination in its acceptance of contributions. In fact, it has managed to resurrect some of the bright, fresh ‘isn’t it all wonderful’ feeling of the earliest Trekzines, possibly because of the input of energy from a group of like-minded friends. This zine is printed digest-sized, so the advertised 56 pages is a bit misleading. However, since under $5 zines are even rarer than good clubzines these days, this one is still fair value for the money. This issue contains ‘… And a Time to Every Purpose’ – a nicely-handled vignette concerning Kirk’s reaction to the death of his brother. Some of the author’s insights could have been fleshed out a bit more for even greater overall effect. ‘A Subtle Suggestion’ – this story is based on the idea that command given Kirk by Dr. Noel in ‘Dagger of the Mind’ (you’re hungry) remained there to plague him with an irresistible urge to snack. Serious as such a problem would be, it seems hard to take seriously, and thus this plot would have worked better handled as a semi-comedic piece. As is stands, it comes across as having been conceived after reading too many dieting inspirational books. ‘Brother’s Keeper’ –is one of the things that gives this zine such a period piece feeling. If the accompanying illos are not originals used for sentiment’s sake, they are a waste of three pages, though. ‘Ghosts’ – a good idea that doesn’t make a good story. Firm editing could have saved this one. As it is, sending the Enterprise back in time to contact an Earthwoman –a writer and a space devotee – of the 20th-century – starts the story off badly on two counts. First the premise is highly improbable and second, making the heroine a writer encouraged the real writer to succumb to the temptation to indulge in writers’ fantasy/dream jokes. The reader is set up for light humor and is suddenly wrenched into pathos when the heroine finds out it isn’t a dream. Her attack on the starship crew – as handled here – for telling her that her dreams will someday come true makes little sense. Much promised here, but little delivered. ‘Smidgeon of Passion’ – is an ‘Amok Time’ southern style piece with McCoy playing the lead. A cute bit with some funny lines. ‘Graven Image’ – a four page introduction for a story that appears in Obsession #2. It concerns Spock and McCoy in a confrontation over an embryo cloned from the deceased Kirk, which Spock intends to raise into a replacement for his dead friend. It certainly succeeds in getting one interested in hearing how it will all come out. ‘Symbiosis’ – another story by the author of ‘Graven Image,’ with a slightly different version of how Spock might try to keep Kirk with him always. The idea of shared consciousness isn’t exactly untouched in Treklit, but this is well-handled and has enough new insights to keep the reader’s interest high. Best of zine award. Overall contents: mostly good. Art: poor to good. Repro: clear and neat with an attractive cover. Value: a zine worth reading. [1] 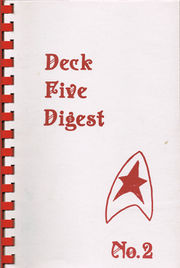 The art is by Jan Meek Beckworth, Laurie May, Keith Tate, James Hunt, and Mary Lowe.

The editorial mentions that the zine "has changed hands many times" during the publication of this issue. The editors are Katharine Scarritt and Deborah Townsend. 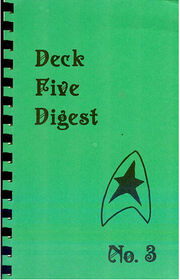 Deck Five Digest 3 was published in March 1983 and is 88 pages long. Editor is Jan Beckwith, and it contains art by Pat Kilner, Linda Warren, Jan Beckworth, and Linda Richards.

Deck Five Digest 5 was published in 1983 and contains 76 pages. The cover is by Pat Kilner.