Obsession is a gen Star Trek: TOS fanzine devoted to the exploration of the character of James T. Kirk.

From a proposal in 1981: "'Obsession' explores the character of James T. Kirk in several stories... The zine will have right-justified margins, some half-toned artwork and a four-color silkscreen cover (of Kirk!)." [1]

In 1983, the editors placed an ad in the Proposed Zines section of Universal Translator for "Obsession X," a zine "of X-rated stories, art and poetry focusing on the life of James T. Kirk." This zine, however, never made it off the ground. 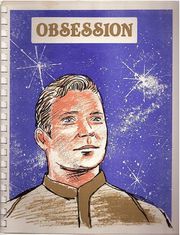 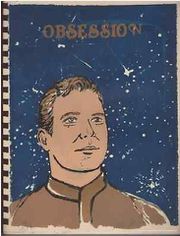 another version of the cover of issue #1

Obsession 1 was published in July 1981 and contains 90 pages.

"Obsession", a zine, in the author's'v/ords, 'devoted to the exploration of the character of James T. Kirk' seems to me to encapsulate all the problems of a British buyer of iunerican zines. The binding is most professional, the typeface is attract ively clear and the silkscreen print of the cover, ambitious. On this basis the zine. seems a worthwhile buy. Unfortunately, in the opinion of this reviewer, there are serious doubts as to whether "Obsession" represents value for money, in these hard times, to British fans. Rather a condemning statement - true, so I'll try very hard to examine the zine in an objective way.

First for me' in any zine, and I suspect for most fans, are the stories. There are only four of any length and all are by the editors, Katherine Scarrit and/or Mary Lowe, This is purely a matter of taste but I find so much by only two writers creates a lack of balance in a zine. However, the story content and style is another matter.

Of the four stories,' which trace highlights and crisis points in Kirk's career, only the last has any great originality. "The Dreamer from the Dream" traces the impact of Star Trek and 'Kirk' on a bleak world of the future. The plot is thoughtful and has a good twist.

The remaining three longer stories are marred by a rather simplistic style and plot construction. This is especially true of "First love", when by a time warp accident, a fifteen-year-old version of Jim Kirk returned to the Enterprise - a splendid opportunity for some interesting character play between Spock and Kirk since Jim at fifteen is even more outgoing than the Captain we are accustomed to. However, the writers never really get to grips with this. We are given only Spock's external reactions, never his thoughts and his careful avoidance of the young Kirk is not satisfactorily explained.

"The Enemy Within the Mirror" is an A/U retelling of "The Enemy Within" and offers few surprises. "Free to Choose" is the author's examination of the 'Kirk -promotion/where next? problem'. No dramatic conclusions are reached.

Next in importance, to this reviewer, comes poetry and really good poetry ranks equally with prose. In this zine the poetry too, is rather simple and again suffers from being all by the same writer, Amanda Wesley. The subject matter is uncomplicated and the curious interspersed of free verse with rhyme is disconcerting in all four poems.

The artwork presents a problem for the reviewer since art is so much a matter of taste. However, I think it is fair to say that the cartoons and the cover are not representationally accurate and an artist friend informs me that silkscreen is the wrong technique for this kind of cover illo. Among the rest of the artwork, only the illo's of the teenage Kirk have a certain freshness.

The zine runs to ninety pages but the margins measure 1" on both sides also at top and bottom. All paragraphs are double spaced and there are many less words to the page than average.

All in all, then, "Obsession" poses a number of problems for the reviewer. The zine is well produced, the writing is average if a little uninspired, yet partly because of the expensive postage, I do not consider that "Obsession" represents a 'good buy' for the British reader. [2] 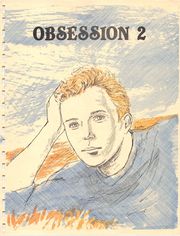 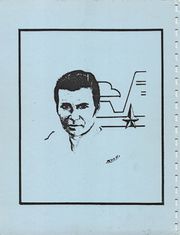 back cover of issue 2, Pat Kilner

There is a foldout of a nude Kirk by Barbara P. Gordon.

If you disliked 'Obsession,' you might still give the second issue a try. It's a great improvement over its predecessor. The seven stories and five poems are stronger and better written and among the ten full-page illustrations are two marvelous head studies by Pat Kilner, one of Admiral Kirk and the other of Captain Kirk of fifteen years before. The three fold-out nudes are a dubious bonus, being heavy on beefcake and short on likeness.

Pamela Rose's opening story involves Kirk in an under-cover operation during which his eyes are opened to what the Federation can require of its agents. The story revolves around an homosexual incident which is not detailed (and does not involve Spock).

Another writer offers her version of the confrontation between Captain and First Officer at the end of the first Five-Year Mission. It seems that as long as fans write Trek, they'll keep on trying do understand Spock's flight to Gol. The story that follows is a good companion to the previous one, an imaginative variation on the events before V'Ger, postulating a Spock who did achieve Kolinahr and then, 200 years later, returned to Earth and Iowa to try to change history.

Then, Cynthia Lockwood, a writer new to me, contributes an insightful story of young Captain Kirk coming to terms with the Prime Directive. His handling of a heart-wrenching situation opens doors of his character to Spock, who thought perhaps he never could get used to this new commander, who doesn't understand his little jokes.

Susan Fetter has written an outstanding long poem using analogues from chess and poker to describe significant events In the heroes' lives. She matches imagery to episode with a sure hand; this counts as one of few really good Star Trek poems I've read.

And finally, there's 'Graven Image', parts one and two, in which Spock seeks to make his dead friend live again by cloning him. Mary Lowe wrote the vignette which is part one, where McCoy discovers Spock's mad plan and agrees to help, against his better judgement. In part two by Lezlie Shell we learn how right he was, maybe. When the story commences', Jamie is fifteen and being reared by his foster parents, the doctor and the and the Vulcan. What they've got instead of a midget JTK is a young Bill Shatner -- a bright kid who wants to be an actor, not a starship captain. Spock's bewildered and clumsy attempts to make Jamie into Jim are touching and the results should strike a chord in any parent, Vulcan or not.

All the above themes are well-worn but each author manages to say something a little differently or bring a new scrap of insight to the characters. I doubt 'Obsession 2' well worth the price and enjoyed reading it once again for this review. Even if you hated No.1, I still say at least borrow No.2. New writers and better realized, more mature stories make it a good value for your time and money. [4] 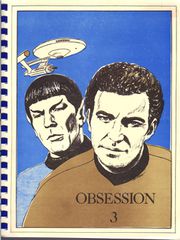 cover of Obsession #3 by Barbara Walker 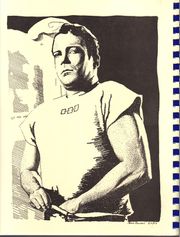 back cover of issue #3, Mark Dowman