The Women's List is a gen, het and femmeslash Star Trek: TOS anthology with two issues. It was published in Minneapolis, Minnesota.

That fans sorely wanted a feminist Star Trek fanzine, which they did not have since the demise of Storms, was evidenced by Tess's editorial in The Women's List 2. The editorial explained that she had received "100 pieces of mail per month to my P. O. Box... Tess hoped to put out at least three more issues; unfortunately, issue 2 was the last issue published. Fandom would have to wait another ten years for the next Star Trek feminist fanzine.

Subsequent Unpublished Issues, and a 1987 Survey

From the second issue's editorial: "The topics set for the next issues were: #3: The Way the Future Never Was, #4/5 Women in K/S Fandom and #6 The Humor Issue." Issue three was to have work by Linda Slusher, Shari Schnuelle, Liz O'Lexa, interviews with Jean Lorrah and Devra Langsam, and fans' reactions to Star Trek IV."

The publisher of this zine submitted Women in K/S Fandom: A Survey in the second issue of On the Double. In the survey's introduction, the editor says those who returned the survey would receive a later issue of "The Women's List" at a reduced price. 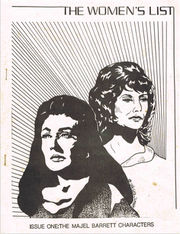 The Women's List 1 was published in the summer of 1986 and has 55 pages. It has the subtitle: "The Majel Barrett Characters." It contains two stories in which Christine Chapel meets Number One (of "The Cage"). The editor thanks Joan Verba, Ruth Berman and Liz O'Lexa. This zine required an age statement to purchase.

[Waking Moments]: It isn't a romance. It also isn't a one-night stand (since that means sex between strangers). What I meant the story to address, briefly and in a non-cerebral way, was loneliness and the different ways in which friendship express itself between people. I challenge the notion that friendship is just 'buddy/buddyism' or being confidantes or partying it up together. This story shows Spock in two different friendships, and none too sure he's comfortable with this human notion of friendship. It shows Chapel and Kirk in a friendship with one another that is based on years of common experiences, including certain 'peak' experiences in their lives, but which does not include the sort of chumminess that we often associated, or mistake for, friendship. In this story, on a night full of ghosts, in the midst of two rather lonely lives, friendship expresses itself through sex and an uncomplicated companionship. Or, at least, that's what I meant to say. [1]

[zine]: The majority of the offerings concentrate on Number One and 'early' Christine Chapel (pre-Spock infatuation), presenting them in the forefront of resisting chauvinism in the service. One of the more extensive offerings is a post-Search for Spock Valkrys story. It is a bit convoluted and repetitive, but also appears to preamble another story. The Women's List is reminiscent of Furaha in its goal to present the women of Star Trek in a positive light as such a much needed addition to the zine literature. The zine could become an excellent forum to project intelligent, independent women capable of exploring the stars beside (not behind) their male counterparts. [2]

[zine]: The Women's List may not look like much next to some of today's inch thick, color cover $15 fanzines, but this zine is one of the best buys you can make. The subject matter alone should make it worthy of your attention. There are two Number One meets Nurse Chapel stories and both of them start with Number One stepping off the transporter wounded, with plenty of other more seriously injured beaming up with her. Both deal with the difficulties women face advancing in Starfleet. But I think 'Dress Uniform Required' was the better of the two; it was a little more optimistic and less better than 'Dreams.' The major improvement that Women's List could make is to move away from vignettes with little plot and mostly conversation, and into fiction with more meat on it. More art would also help it some, but I know how hard good art is to find. [3]

The Women's List 2 was subtitled: "The Women of Vulcan." It was published in 1986 and contains 72 pages, printed on dot matrix. There are no page numbers in the issue. 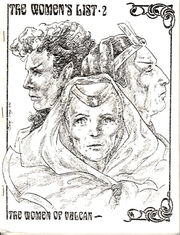 From Boldly Writing: "The notable story in this issue was "That Which Is Given," by Ouida Crozier, in which Saavik goes into pon farr after the events of Star Trek III, and consummates a relationship with a Romulan woman physician."

From the editorial in the second issue:

When we started with the first issue of The Women's List, the question in my mind and the minds of many others was: is there enough interest in presenting work from a woman's point of view to sustain a journal with that focus? Well, the first issue was double its intended size, frecieved favorable reviews, generated over 100 pieces of mail a month to my PO bod, and sold out its print-run in less than three months. So much for that question...Next question: where do we go from here? You readers seem to have no shortage of ideas on that topic either. The topics set for the next issues are #3: The Way the Future Never Was, #4/5 Women in K/S Fandom and #6 The Humor Issue." Issue three was to have work by Linda Slusher, Shari Schnuelle, Liz O'Lexa, interviews with Jean Lorrah and Devra Langsam, and fans' reactions to Star Trek IV.

[zine]: Tess Kolney is still producing the most interesting zine in town. Humpty Dumpty' consists of 'off camera' scenes and dialogue that might have happened during ST III, with emphasis on Uhura. The story has no real direction, doesn’t develop Uhura beyond the movie, nor does it elaborate the legal/political status of the crew beyond what was likely. This is probably because she locked herself into ST III and could take no chances with what was on the screen. Berman would have had more freedom to develop Uhura and the crew’s status on Vulcan if she had placed her story after the movie. ‘Shreeka: The Legend Begins’ is more daring with T'Pring. Spock’s ex-betrothed finds herself trapped in a political/religious web of her own making, and rather than face a no-win scenario, heads out into the desert, changes her name, and founds her own community. It’s hard to tell if Howard intended this vignette to be a prologue of a series, or if it was a short story that ran out of steam, as the awkward last paragraph suggests. If he has more to write, I’d like to see it.

Tess Kolney’s interview with Majel Barrett is worth the price of the zine by itself! Kolney asks the sort of informal questions that reveal more about Majel than most professional interviews could. Kolney’s introduction, and her follow-up article, ‘Christine Chapel: A Loser at What Cost?’ provided a very lucid frame for the interview.

Reprinted from Masiform D #5 is Jean Lorrah's ‘Time of a New Beginning.' It’s almost a given that Lorrah knows what she writes about, be it Trek or anything else, and this sample of her work is case in point. T’Irane does seem a little too human in attitude, but that no doubt is the result of running around with the Federation instead of staying home like a good little Vulcan wife… ‘Speculations on the Vulcan Matriarchy’ by Verba would have been better off in Kolney’s letterzine Sociotrek. It would have made for an interesting start to a conversation, but the article itself is not very deep or insightful.

In ‘Driving Out the Demon,’ Amanda tells a ghost story around a campfire… aboard the Enterprise (it’s a hologram). This is the tightest, best-conceived story in the zine. ‘Priorities’ is less believable. Its plot can be summed up as ‘Janice Rand gives male chauvinist Kirk the brush-off,’ with a subplot about an old lesbian acquaintance of Rand’s. Kirk is my least favorite ST character, but he isn’t half the jerk Miller made him out to be.

As a Saavik fan, ‘That Which is Given’ was a major disappointment for me. I have no problem with Saavik developing a lesbian relationship with a Romulan or anyone else, but it seems that Crozier has read too many Harlequins before she wrote this. When she has Saavik deliver lines like, ‘Hold me,’ she whispered hoarsely. ‘Please, hold me,’ it comes off out of character. And Crozier doesn’t deal at all with the problems of having a relationship with a member of a hostile government. The art is much better this time, though most of the cartoons aren’t very funny. The printing is faint at times and difficult to read, and the staples tend to fall out just like they did in the first issue.[4]