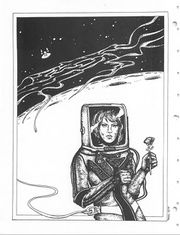 inside art from Interphase #4, Connie Faddis 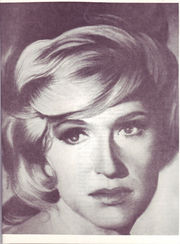 Christine Chapel is a recurring character in Star Trek: The Original Series, and returned as Dr Chapel in Star Trek: The Motion Picture and Star Trek IV: The Voyage Home. She was played by Majel Barrett. (In ST:XI she is mentioned in dialog.)

She has a canonical unrequited crush on Spock.

Some Brief Canon Things About Chapel

The Chapel in fanon, naturally, is given much more agency than the one in canon.

Fanworks have portrayed in a variety of ways:

Some Fannish Reaction to Chapel

Fans tend to have strong feelings regarding Christine. Some feel she is a strong character who could hold her own, some enjoy her unrequited love towards Spock, others dislike her passivity.

Thank goodness something is to be done (in the film) with Christine Chapel. Never was a character more used and abused. One minute she's an excellent nurse with a witty, intelligent turn of speech, the next she's a goggle-eyed, wishy-washy, incapable, lovesick male chauvonist's dream girl. How can scriptwriters and those responsible for character continuity allow such a thing? How could Majel Barrett allow her character to be so mutilated? It's inconceivable that such a strong-willed woman as would search the galaxy for a lost fiance should waste herself on Spock. He isn't her type, if Corby is any guide. He [Spock] doesn't love her, he pities her, tolerating her out of politeness. I don't believe she loves him either. I think the revelation of the truth surrounding her fiance shattered her, made her so unwilling to trust another man that she latched on to the only 'safe bet' - Spock. She could direct her feelings at him, knowing he wouldn't take her up on it, wouldn't betray her, wouldn't hurt her. She'd run a mile if he tried to start something, witness her reaction in Amok Time. And the fact she was so obviously interested in him would deter any other man from making an approach, so she was doubly safe. I hope she breaks free of him when he's served his purpose, and finds true love elsewhere. She's had enough heartbreak without burdening herself with a lifetime's toil and anguish on Spock's behalf. Set her free, you lot, she deserves it. Let her be happy. [1]

[Christine Chapel] is perhaps the most maligned player in Star Trek. She has been flitting around the edges of the series for almost twelve years now, and I think it's about time someone spoke up in her defense. [2]

There is also a little Uhura/Chapel femslash based on their friendship in canon, one being a very early fic called Kismet (1977). Another early fic, a Chapel/Rand one, is Cross Currents (1980), the second Star Trek: TOS story written by Marion Zimmer Bradley.