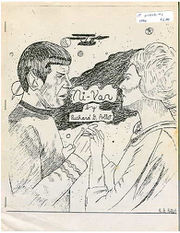 This zine shows a lot of promise, has an interesting Spock/Christine story, and presents the reader with an intriguing glimpse of life on the planet Vulcan. The writing is a little rough in places but the storyline is original enough to carry the reader over occasionally stilted conversations and lengthy sentences. The beginning is a mite contrived, but how my ways are there to get Spock and Christine together? Not many, and while Mr. Pollett’s idea wasn’t original, nice touches like Spock’s recognition and the sentient time warp, make it worthwhile. The highlight and the most substantial portion fo the novel, is the wonderful pre-Reform Vulcan society that the writer creates so vividly. His characters are powerful, believable, and totally alien to the Vulcans we know and love. Mr. Pollett restrained from having Spock wade in and save the day. In fact, the day-to-day revelations of Spock’s and Christine’s three-year marriage seemed so real that I expected to look out my window and see sand dunes. Christine is depicted as being smart, compassionate, and surprisingly capable. Spock is wonderfully understated, rising from a stranger to the king’s peace-advocating advisor. Spock, like in 'All of Our Yesterdays,' begins, predictably, to devolve when they go back in time. It has never made sense to me that going back in time could make anyone more barbaric, and Mr. Pollett gives credence to the theory of planetary empathy (Spock linked to his people whatever the time period) and not devolution when he has Spock erect mental barriers against his base instincts. Mr. Pollett give his barbarians such wonderful background that I easily accepted the fact that whoever was weak in body or spirit had to die. He skillfully deglamorized the familiar kahlifee and returned it to its brutish origins. The fact that Spock and Christine had been chosen to fulfill some destiny seemed to completely escape Spock as he decided to ‘remove’ their young son from the time stream. This weakened the story and it got weaker still as it continued. Having a trained nurse have a baby and then think it was all a bad dream was unlikely. The bit with the psychiatrist had potential, but didn’t accomplish anything. If Chapel had realized that it couldn’t have been a dream, then the doctor would have been well-used. By the time Mr. Pollett tried to straighten out the twists, McCoy’s surprising announcement at the end [w]as wasted… The story is worth reading for the lifelike twist to the bloodthirsty Vulcan, but I don’t think Mr. Pollett had an idea of how to reestablish the status quo at the end so it was rushed. Perhaps, it was intentionally misleading, but trying to believe all of it strained my feeble mind. I enjoyed the story, read it in one sitting and would recommend it to anyone wanting to see Spock and Christine in a realistic relationship (I loved the wedding night with an audience) or Vulcan in all its pre-reform glory. ‘The Way’ was great, although I’ll admit to a weakness for stories with a punch line. All in all, Ni Var is a nice, fulfilling zine. A little more active editing would have helped but the characterizations were excellent. [1] 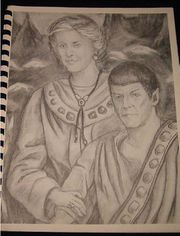 Ni Var 2 was published in 1988 and is 93 pages long. It is subtitled: Reunion and Farewell.

Summary from an eBay seller: "This novel is about Spock creating a paradox in Vulcan history." 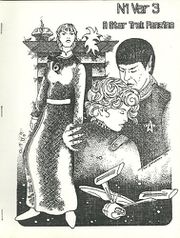 Summary: "A pair of Spock-Chapel novels, the first a sequel to Richard Pollet's own Ni Var 2 (see Abode of Strife #7): Chapel and Spock must come to grips with the legacy that their time travel has created when one of their son's ancestors (the family line is considered outcasts by Vulcan as a whole) is assigned to the Enterprise; meanwhile, Vulcan debates the identity of Surak's friend who saved his life before Surak started what is known as the Reformation." [1]

First story: "NI VAR 3 by Richard Pollet begins just before (and then after) the encounter with V'ger where. After being recalled by Starfleet, Spock and Christine are reunited after their separation at the end of NI VAR 2. Unfortunately, their reunion is clouded by controversy stemming from their testimonies before committees regarding their second venture into Vulcan's past and the serious implications of the actions of their son marooned in the past which threaten to undermine Vulcan's philosophy based on the teachings of Surak. To make matters worse, Sub-Commander Lese of Romulus who commands the Ravaoer is out for revenge and Kirk's blood for the death of the Praetor, and he will do anything to reach his goal, even the kidnapping of a landing party including Chapel and Spock."

Second story: "NI VAR 3: A NEW BEGINNING by Debra Wimer begins with Chapel recovering from her miscarriage and attempting to come to grips with the reality of Spock leaving her for the Kolinahr. Determined to not lose her husband, Christine returns to Vulcan to persuade Spock to return to her to start the marriage anew. But obstacles obscure the pathway to marital bliss, including contending with Sarek and T'Pau who have not approved of their marriage as well as Starfleet bureaucrats who would forbid them from raising a child onboard the Enterprise."