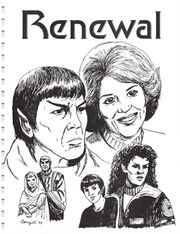 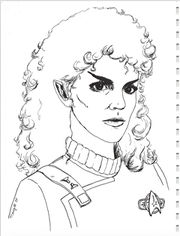 back cover by Cheree Cargill 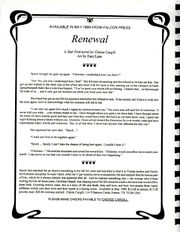 Renewal is a het Spock/Chapel 86-page novel by Cheree Cargill.

Description from the publisher:

Spock had searched for an elusive something in his life for years and had tried to find it in Vulcan studies and finally the Kohlinar discipline. It wasn't there. After the V'ger mission, he re-evaluated his life and realized that the human part of him, which he'd always denied, was essential after all. And he realized something else -- the woman who'd been waiting for him all those years, Christine Chapel, was slipping out of his life unless he made a decision that would affect them both. Covering twelve years, this is a story of life and death, duty and love, and how two people from vastly different worlds join their lives and their hearts in a lasting union.

This is dedicated with thanks to all the folks who encouraged me when my obsession with Star Trek: The Original Series reasserted itself after over 15 years, particularly to Z.P. who responded to countless e-mails with thoughtful comments and wishful thinking.

Thanks to Dani for agreeing to tackle the illustrations and then producing such wonderful artwork to accompany the text.

Thanks to the people who I have met via the Intemet who think Spock and Christine ought to be together, too.

And special thanks to Leonard and Majel, without whom Spock and Christine would not live and breathe as they so wonderfully do.