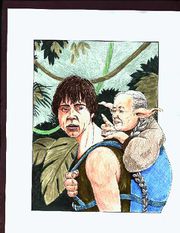 Z.P. Florian as Yoda, art by Nancy Stasulis. This was presented to Z.P. Florian at the 1998 STAR aWARdS: "I let the audience choose the categories that they wanted to hear about first. We did maybe four or live categories when I surreptitiously activated this little flashing light that I have. I waited a few minutes to insure that everyone had seen it then I said, 'Hold on a minute. It looks like we have a message coming in. I'd better see who it's from. Oh, it's a message for Z. P. Florian from Master Skywalker. He says that he really enjoyed her visit to Dagobah and as promised he was sending her the pictures.' With that I asked Z.P. to come up and handed her a piece of special (and I must tell you, gorgeous) artwork done by Nancy Stasulis. It showed Luke Skywalker on Dagobah with the backpack on his back. In the backpack was Master Yoda and Yoda's face was Z.P.'s. I had some people pass out copies of this drawing so everyone could see it. Z.P. and the audience loved it. Z.P. told me that she had it framed and it's hanging on her wall. [1]

She wrote gen, het, and slash, and edited the explicit adult het and slash zine The Rest of the Garbage. She also published a single author zine Anakin (zine) in 1991.

For some co-written fiction, she and various writing partners would use the pseudonym The Mud Dwarf. She once co-wrote a story with Ltlj that was so explicit, they were both too shy to put their names on it and it and it was published under The Mud Dwarf pseudonym.

Z.P. was born in Hungary, was a journalist, and had worked for Voice of America radio. She was also a science fiction and fantasy fan, and was cited in the acknowledgements of The Death of the Necromancer by [ Ltlj ] . The character "Florian" in Wells' Fall of Ile-Rien series was named after her.

She remained active in media fandom, attending MediaWest*Con every year, until she began to suffer from frontotemporal dementia with motor neuron disease in the early 2000s.

She wrote: "To those who tell me to get a life, I softly whisper, SW is life. Besides, I'm more than half a century old.I don't need to be told that I'm a nut, but a happy nut, a very very happy nut." [2]

Master and Apprentice: tribute and apology to Z.P. by Tara Bognar; WebCite