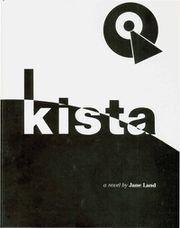 cover of the zine Kista

The PDF is available online through the OTW's Open Doors Project here. It can also be read on Archive of Our Own as a chaptered work here.

The plot of this novel is more or less Star Trek meets Clan of the Cave Bear: Spock and Christine are stranded on a planet with a paleolithic technology level, they have to adapt to the local culture and a relationship develops between them.

I'm not going to reveal many details of this novel, because I don't want to spoil any of the surprises. I'm not even going to identify one of the major characters, because that character hasn't received the best of treatment at the hands of fan. But I wiII say that the other primary character is Spock, and that I would have read this novel in one sitting had I the sufficient free time. This is a story of survival, both In traditional and nontraditional meanings. Just when I thought I had the outcome second-guessed, the plot would take a twist (justified though, not arbitrary convolutions) and leave me guessing and clawing at the pages to discover the resolution. KISTA has my vote for best fiction I've read yet this year. This is a prime example of a fanzlne not having to spend a small fortune In production costs -- there is no artwork, except for the cover graphics (which are striking): the print Is clear and neat, and the book Is perfect bound (in signatures, yet!). The only fault I could find in this work was the occasional need for minor editing -- very minor, and things probably no one but a nit-picker such as myself would even notice. I'm very much anticipating more work by Jane, and wil I plunk my money down sight unseen for any- thing else she has for sale -- especially the sequel that is already In first draft form.

A word of caution -- this is a story for the mature reader: don't share KISTA with the young Trekkers in your household, especially not young female teens. There are some scenes which, while necessary and true-to-Ilfe, are very intense and powerful. I'd rate the book PG-13. And keep the box of kleenex handy for the last third of the book: you'll need it (and no, this is not a gory hurt/comfort story). [1]

One of the most neglected genres in the zine literature is that of stories dealing with Christine Chapel. This is not to imply there are not authors that include her as a lesser or even major character. Rather, the treatment of Christine as an intelligent, mature woman is lacking. Too often she is portrayed as a sniveling, love-sick puppy perpetually mooning over the unattainable First Officer. KISTA endeavors to present Christine Chapel as a woman capable of surviving and adapting to a hostile environment as well as coming to terms with her fellow survivor, Spock. Kidnapped from Wrigleys by Orion slavers, they are soon discovered to be Federation officers and stranded on an uncharted planet. The zine is rich in detail as their lives become entwined, first through necessity, then by choice. In plot, KISTA bears resemblance to CLAN OF THE CAVE BEAR as a small indigenous tribe shelters the two outworlder and then absorbs them into its numbers. Males dominate as a rule, however, and Christine achieves her own status by assuming the role of healer and priestess. Spock does not readily accept what fate has dealt him, gradually acclimates. This is, I believe, Jane Land's first novel. It is a laudatory first effort and deserves the sequel currently in process. Her development of Christine is the stronger of the two main characters. Spock is not as well-defined and tends, after a time, to blend with Christine's personality, especially after the melding of their minds. I am confident this tendency will resolve itself with further writing experiences. [2]

KISTA is not a sappy romance novel. The story concerns the physical and emotional survival of two beings stranded on a primitive planet. That those beings are Dr. Christine Chapel and Mr. Spock encourages our caring about the events and their reactions to their situation. I especially enjoyed a Chapel who doesn't brood about Spock and has an appreciation for the positive effect loving somebody, even if unreturned, has had on her life. This acceptance of the situation doesn't mean she does not want him, only that she is not waiting for him to change. Jane Land writes about an adult relationship that is believable and logical as well as emotionally satisfying for the couple involved and the reader. The story covers a-period of four years, during which time the reality of living with primitive people and necessarily functioning as part of the tribe changes Spock and Christine; we find Christine training and acting as tribal witch doctor and Spock as a member of the male hunting team. Many of the situations are reminiscent of castaway cliches, but the action of the characters are not contrived and are logical and believable in their context. Jane Land has succeeded in making the story seem new and unused. The love scenes are romantically passionate without violating the characterizations we accept for Spock and Christine. Altogether an engrossing story and recommended for all readers who enjoy a romantic relationship story, a story with a positive mood, and an admirable female role model. Best of all, Jane seems to mail her zine out rapidly. [3]

If Spock and Christine Chapel were stranded on a planet of primitives, with only a 14.93% chance of being rescued, would he bond with her? Some readers cannot accept such a union under any circumstances, and this novel is not for them, but for those that are willing to concede the possibility, KISTA is enjoyable. Half of fandom seems to be eternally asking the question, "What is there to see in Christine Chapel?" Jane Land gives us an eloquent answer. Series Star Trek has only given us a few brief glimpses into Chapel's more positive qualities; her courage, loyalty, and humor. KISTA manages to incorporate and develop those qualities into a three dimensional character worthy of respect. The primitive society is more than a shallow background for a romance. The culture becomes a personal challenge, causing them to question their respective identities; Spock's as a Vulcan and a Starfleet officer, and Chapel's as a doctor and a woman. Interaction with the tribe is unavoidable, and when they ultimately decide to throw the Prime Directive out the window, the reader can certainly sympathize. The novel leaves a few loose ends which indicates a sequel is forthcoming. One can only hope that it will be as well written as this one. [4]

I have just finished reading two wonderful novels... I would like to highly recommend Kista and Demeter, both by Jane Land. These novels will particularly appeal to those who believe in a capable, independent, self-reliant, and sensuous Christine... Kista starts with the kidnapping of Christine and Spock and their subsequent abandonment on a planet inhabited by a primitive hunter-gatherer culture, known as the Domii. Kista is fundamentally a very beautiful love story, set primarily in a Jean Auel type environment. Land traces the development of the close inter-dependent relationship between Spock and Christine as they each try to adjust to the culture in which they have been marooned. The characterizations are very good. Christine adapts so well, that she is selected as the healer of the tribe. Spock has more difficulty adjusting and is portrayed as compassionate, vulnerable, and sometimes illogical. The plot is very well structured and much more complex and creative than I have suggested here. [5]

I put off ordering ‘Kista’ for a long time because I was thoroughly turned off by blurbs which sounded something like: ‘Spock and Christine are kidnapped by Orion slave traders.’ Sounds deadly, right? Well, that does indeed happen but it take up only about 8 pages near the start of the novel -- and then we get to the real story. My second fear was this would be a story in which Chapel and Spock ‘fall in love.’ I hate those. From my perspective, Spock is a Vulcan and therefore will never fall in love. I accept his ability to form committed and interesting relationships with others but, sorry, no gushing Vulcans for this girl. Land apparently agrees. To my delight, Land turned out a complex, beautiful, and emotionally-satisfying story about self-definition, responsibility to one’s self and one’s community, the joy and work of building relationships with others. While there is no single riveting plotline holding this novel together or propelling one through its pages, the novel doesn’t need one. The alien culture introduced is unique, the struggle to communicate believable, the series of conflicts compelling, and the main character’s growth and growing relationships involving. As an aside, I’ll add that the sex scenes in the novel are about the most realistic I’ve ever seen in fan fiction. And I don’t just mean she figured out where all the parts go. The scenes are a believable and well-written mixture of dialogue, descriptions of physical and emotional and intellectual activity, and the interplay between the characters and their pasts and current environment. They are, additionally, reasonable outgrowths of the other exchanges between the characters – not just sex/love scenes arrived at by contrived plot devices. [6]

Now on to my two favorite zines [the other is Demeter] of all time. They are both by Jane Land and are novel length. The first is called Kista and I don't know whether it is still available. It is a Spock/Christine story, but it is unlike any other I have ever read. In it, for the first time, Christine Chapel appears as a real, multi-dimensional being. I loved it. In fact, I read it while I was writing my first ever piece of fiction, and Ms. Land's Spock kept trying to climb onto my computerscreen! When I decided to write a second story, I gave in, wrote to Jane to request permission, and borrowed her universe to set my story in. If you are a Chapel fan, beg or borrow a copy of this zine (but you can't have mine!). It is worth the hassle. [7]