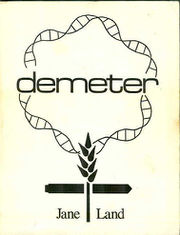 Demeter is an adult het 304-page Spock/Christine novel by Jane Land. It contains no interior art.

It is a sequel to Kista, featuring the same setting and characters, and takes place seven years later.

The novel is available online as a pdf scan through the OTW's Open Doors Project here. It can also be read on Archive of Our Own as a chaptered work here.

A threatened all-female colony will only accept help from women. Uhura and Christine lead an Enterprise team to battle the prejudices of the colonists and the Federation, as well as more sinister forces that imperil them both. Set seven years after Kista, but stands on its own. Some adult material. [1]

DEMETER continues In the universe established by the author's previous novel, KISTA, but stands quite well on its own. Of course, If you've read and enjoyed KISTA, you'll go nuts over this one. Set seven years after the events of KISTA, DEMETER Is another page-turner, this time featuring the Enterprise female crewmembers. The basic plot is that the fanatically all-female colony of Demeter is In need of Federation assistance, but will accept help only from women. Uhura and Dr. Chapel lead an Enterprise team "battling the prejudices of the colonists and the Federation, as well as the more sinister forces empaling both." Teeming with intriguing new characters and situations, DEMETER also has plenty of interaction with our old friends among the crew. But probably the most exciting aspect of this novel is the manner in which we are force to examine our ideas of sexuality and roles. I was amazed -- and embarrassed -- at how often I found myself expecting the male cavalry to come charging over the hill for the rescue. Forget being able to predict the course of action in this one, ladies and gentlemen, especially if you're using 20th century values. But this is not a raised-fist, radical Libber's diatribe against the Male Enemy -- it is an intriguing study of people and cultures, guaranteed to hold your interest from start to finish. This belongs among the "10's" on my fanzlne shelves. Content: I'd rate this PG 13 -- not for children looking for High Tech or Space Opera, as a number of controversial themes are integral to the story. [2]

Demeter, the second novel, stands alone, but is in the Kista universe, seven years later. An underlying theme in Demeter is the continuing strengthening and testing of Christine and Spock's marriage bond. However, the main theme is the subtle and not so subtle sexism still present in the Federation Universe in the 23rd century. An extremely addictive drug is being introduced by an extremely unscrupulous villain to an ever wider number of planets. The source of the drug is a planet, settled 50 years earlier by a generation of brilliant and talented women, who when denied advancement and recognition because of their sex, colonized a world, and created a society which excluded men. The villain’s drug manufacturing plant on their planet has created serious problems for the feminist community and reluctantly, they ask Star Fleet for assistance, stipulating however that only females beam down to their planet. Kirk and Spock reluctantly delegate authority to Uhura, Chapel, and several other delightful new characters. A joy to read, contains some adult material, has perfect binding and no interior art. [3]

’Demeter’ takes place about seven years after the end of Kista. It is more tightly written, better plotted, but is a little harder to describe. Unlike ‘Kista,’ which sticks pretty closely to Chapel’s viewpoint, ‘Demeter’ has several viewpoint characters. Like ‘Kista,’ it creates a number of fascinating new characters and yet gives us new views on the ST regulars. ‘Demeter’ also offers new culture but, unfortunately, not one nearly as complex or well-though-out as that portrayed in ‘Kista.’ If ‘Kista’ dealt with major questions about communication, self-esteem, and relationships – then ‘Demeter’ really brings out the big guns. It takes on questions of sexism and female autonomy in the Federation, of female separatism, of equality in male-female relationships (What does it mean? Is it possible? What would it look like?), and of self-definition for women. I don’t think it addresses these questions as well as ‘Kista’ did in its concerns; the plot is too hectic, the multiple viewpoints limit the depth somewhat. But I still found it thought-provoking. In Jane Land’s two novels, I saw the type of ST fan fiction I always dreamed of reading: fan fiction which, without being disloyal to the original series cast or concepts, boldly addresses issues pertinent to our current lives (as ST did then) and creates strange and marvelous vistas for us to explore.[4]

Now on to my two favorite zines [the other is Kista] of all time. The second of Jane Land's novels is called Demeter and takes place seven years after Kista, but is not a sequel. Where Kista is a love story, Demeter is, to use Ms. Land's own words, "a novel of ideas." In it, she deals with possible reasons for the apparent lack of progress women have made in the years between our present and Star Trek's time. In doing so, she reveals many of the conflicts women presently deal with while trying to satisfy all the desires and expectations that we experience or have thrust upon us. As a working mother and trained dancer, living in suburbia, who has had to make many compromises along the way for my own benefit as well as that of my husband and daughter, this one hit home. I recommend it highly. [5]

I am interested not only in analyzing a 1987 fanfiction novel focusing primarily on Uhura and Chapel but also in questioning whether the ways scholarship has analyzed m/m slash fiction while ignoring the other genres of fan fic ( het and gen, heteosexual romances and general stories, i.e. stories not focusing on relationships) is useful for the women-authored, women-centered fictions, whether gen, het, slash or, as is the case with my chosen text this year, a blend. In her 1987 novel, DEMETER, Jane Land sets out explore the question of what it might mean if sexism still existed in the Federation (Introduction), but sets her story within a very canonical plot: the Enterprise is tasked to deal with a new and instantly addictive drug, called nirvana which turns out to be coming from a colony planet. The ship is on a routine run to a Starbase when they are attacked by two freighters that had seemed to be in distress; they destroy one, the other self-destructs. When the Enterprise arrives at the SB, they are told of a distress call from a little-known colony that says that drug is being produced there, with negative effects to the colony. The twist is that Demeter, the colony, was founded fifty years earlier by lesbian feminist separatists from Earth; they request only female personnel come to the planet. Kirk must put together an all-female away team and remain behind on the ship, along with Spock, McCoy, Sulu, and all the other male crew. A sub-plot involves the complexities of balancing work, marriage, and family in Star Fleet, experienced through Chapel's perspective on her ten years of marriage to Spock in the Vulcan tradition. Their relationship is only one of a number of romantic, sexual, and life relationships that are explored by Land in deftly interwoven scenes. Equally important are relationships between the women of the Enterprise and Demeter colony (which are primarily those of friendship; at one point, Rahab, an engineer on Demeter expresses sexual interest in Keiko, a security officer on the ship). The way this novel handles the variety of relationships, including the range of discussions among women, are what have made me consider whether it is useful to separate women-centered fics into gen/het/slash genres of traditional fanfic scholarship. [6]