Information about the editor has been removed at the creator's request.

Alpha Touch is an adult gen and non-explicit het Star Trek: TOS zine. It was edited by [L L]. 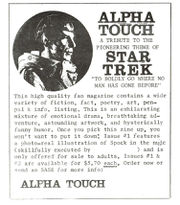 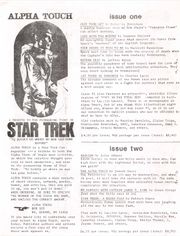 ALPHA TOUCH is a tribute to the Alpha state of brain wave activity, in which the creative thought process is most productive, and to the pioneering theme of Star Trek "... To boldly go where no man has gone before..."

ALPHA TOUCH: These are the pages of your imagination. Our infinite mission: to express creative thought and explore strange new idias, to seek out new life and new imaginations, to boldly go where no mind has gone before....

We wholeheartedly express our thanks to all the generous people who contributed their talent and time to ALPHA TOUCH, the Star Trek revival, and all good forms of science fiction.

From an ad in Datazine #7: "A new ST genzine which contains works of fiction, poetry, art, articles, essays, jokes, graffiti, and limericks, as well as some original SF."

From an ad in Scuttlebutt #16: "A general ST fanzine dedicated to the Alpha state of brain wave activity, in which the creative though process is most active, and to the pioneer theme of ST, '... To boldly go where no man has gone before."

From an ad in The Clipper Trade Ship #27: "STAR TREK FAN MAGAZINE NEEDS YOU!! Alpha Touch, a general ST Fanzine, needs contributions of every type: short stories, factual or analytical articles, artwork, essays, jokes, limmericks [sic], poetry. Original science fiction is also accepted and appreciated. Published authors receive a free copy of the issue their work appears in. Issue one is available in a limited supply. It contains an illustration of Spock in the total nude. Please note that it is done in good artistic taste & should not offend the general public. Alpha Touch does not contain any pornographic material. Views of Intimation, a new ST zine whose goal is to explore the more personally emotional themes of ST, also needs contributions. SASE for price info when it becomes available."

From an ad in the con program for Starbase Baltimore: "This high quality fan magazine contains a wide variety of fiction, fact, poetry, art, pen-pal & info. listing. This is an exhilarating mixture of emotional drama, breathtaking adventure, astounding artwork, and hysterically funny humor. Once you pick this zine up, you won't want to put it down! Issue #1 features a photo-real illustration of Spock in the nude (skillfully executed by [LL]) and is only offered for sale to adults." 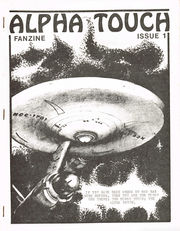 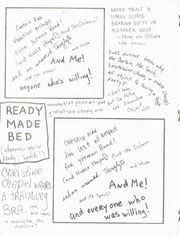 Alpha Touch 1 was published in 1979 and contains 52 unnumbered pages. It is photo offset with half-tones.

The art is by ERIC, Gloria Ann Rovelstad, and [L L].

The zine had a number of nudes in it, something that generated fan discussion and was discussed by the artist/editor in the second issue.

An ad in 1979 says it "contains no adult literature." An ad in 1980 says "There is an illo of a nude Spock. If you may be offended, please don't buy the zine." A flyer in the second issue states: "Issue one contains lots of artwork (including half-tones), featuring an attractive, realistic half-tone illustration of Mr. Spock in the total nude (executed by [L L]). There is no pornography in Alpha Touch -- the nude is art -- but if you think this illustration might offend you, please do not buy issue one, as it is not our intention to solicit readers who may be offended by what we have to offer."

From the zine cover: "If you have been where no man has gone before, then you are the first one there; the first touch; the alpha touch."

ALPHA TOUCH is a tribute to the Alpha state of brain wave activity, in which the creative though process is most production, and to the pioneering them of Star Trek, "To... To boldly go where no man has gone before."

ALPHA TOUCH: These are the pages of your imagination. Our infinite mission: To express creative though and explore strange new ideas, to seek out new like and new imaginations, to boldly go where no mind has gone before...

The editorial for issue #1:

Well, folks, here it is, the first issue of Alpha Touch, Can you believe I finally met a deadline? Can you believe it's been one whole year since I began work on this zine? Back then it was only supposed to be a twelve page mini-zine, but somewhere along the way, it turned into this. And all along the way the prices rose. The printing estimate from June rose 12% by August. There were also more pages to be printed by then. There were also several doctor bills, because when I finally realized what a monumental job I had gotten myself into, they had to put me in a rubber room for a week.

Next on the list: Why a nude Spock? Everyone wants a reason. Everyone asks. My question is, why not? Actually, the idea has fascinated me for quite some time. I wanted to see if I was capable of doing it, so I tried. If I decide to make nudes a regular feature. Captain Kirk will be next. I would like some feedback on this, and on the magazine in general, so please write and let me know your opinions.

After you're through reading this magazine, you'll probably be wondering how I got such fantastic contributions. My secret is to read everything, I want to include a wide variety of material in the next issue too, so there are no strict guidelines for contributions. Everything is welcome, including factual articles and origional science fiction.

I want to thank everyone who contributed to this issue, ran errands, loaned money, gave encouragement, and just generally helped out. You know who you are. Keep up the great work.

Issue 1: Regarding the Art 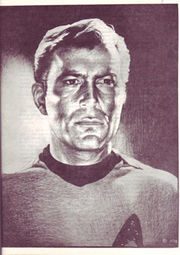 Kirk, inside art from issue #1

The interior art pieces are highly detailed and accurate pencil drawings done in a transparent style. Like a lot of zine art, the drawings are mostly based on production stills from the series. For example, the Kirk art mimics Kirk's typical hero poses and expressions in some publicity photos.[1]

The images of Christine Chapel and Sulu are based on the episode "The Naked Time." The Chapel art is similar to a still of Majel Barrett.[2] The image of Sulu is based on a still from the famous scene when he runs around the ship, shirtless and carrying a fencing sword.[3] Unlike many other fanzines of the time, the inclusion of full-size portraits of secondary characters such as Chapel and Sulu is unique. Most artwork focused on either Spock or Kirk, with Doctor McCoy and Uhura running a distant third and fourth. Sulu and Chapel received only a small fraction of art 'air time'.

The image of a naked Spock posing with a lizard is part of a trend in zine art where a television character poses naked with an animal.[4] Like a lot of fanart with shirtless Spock, he is depicted here with an almost alarming amount of chest hair. This trend may have started after a Star Trek episode ("Patterns of Force") featuring Kirk and Spock half-naked and behind bars.[5]

One illustration—a tree sprouting from a pair of legs—is unusual for fanart. It is influenced by science fiction surrealism,[6] whereas most zine art tends to be more realistic and character-based. It is part of an early trend where fanzines would incorporate traditional sci-fi/fantasy artwork and stories before they started focusing solely on fan fiction and fannish art. Other examples of surrealist fanart can be found in the zines Genesis and Organia. This piece was probably an illustration for a story in the zine.

In the second issue of "Alpha Touch," the artist commented on the nudes in #1:

In the last issue, I included an illustration of Mr. Spock in the nude, painstakingly executed by yours truly, me. I must admit that I was astounded by the audience reaction that this provoked. People either loved it or hated it; very few were apathetic. Among the adjectives and exclamations they used are: Hotdog!; How could you?; that’s DIS-GUST-ING; loved it; Provocative; FASCINATING; perverted pornography; obscene; tantalizing; excellent; Huh?; and 'Great Balls O' Fire!' Someone even went so far as to accuse me of including pornographic material in a non-pornographic fanzine for the sole purpose of ’ego-boo’ (yes, ego-boo is the exact term this person used). In answer to that, I can only say, of course it was ego-boo. All fanzines are, dearie.

In regard to other aspects of the nude Spock: It is not pornography - it is art, I understand Michelangelo had to put up with the same thing when he did the Sistine ceiling. Granted, I’m not in his league, but the philosophy does apply.

In regard to nudity in general: Although I received many complaints about the nude Spock, I did not receive any comments whatsoever about the bare female breasts that also appeared in the first issue of Alpha Touch. This implies that female nudity is acceptable where male nudity is not. I don’t know which gender should be more offended. To those of you who enjoyed the nude Spock: I’m glad you did, because so did I! That's one of the reasons why fanzines exist.

And to those of you who are wondering about the nude person Spock was posing with in that illustration: That's his wife. As a Vulcan, he would choose his consort for her mind. Race and physical appearance would be totally unimportant. Nice family portrait, huh? 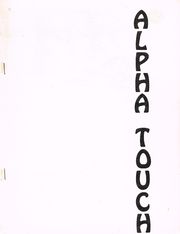