Genesis is a gen multifandom anthology with 39 pages. It has art by Joshua Park (front and back cover), Kate Kimura, Francis Mao, and Adam Chiu (fold-out). 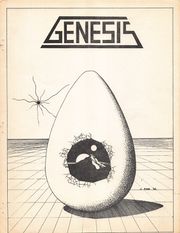 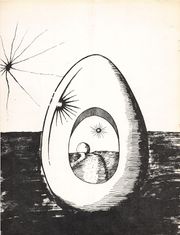 From an ad in Universal Translator #24: "... a multi-media zine with an emphasis on sf. Among the characters you'll meet are T'Pon, Starfleet Commander and Spock's sister; Ranni Tattaran, the knife-wielding ex-compatriot of Han Solo; and his boss, the lady pirate, Callipe Jiin. BG and other stories included."

Before you start glancing through the magazine, let me warn you about a few things: the format's kinda screwy and the type's kinda small. My intention at the time of this magazine's conception was to make a magazine that did not cost a bundle and that utilized every bit of space so as not to waste anyone's money. Well, in some ways I've accomplished those goals. I did manage to fit in an enormous amount of material into the zine, and the magazine is reasonably priced. You may have a little trouble following how the story is run, though; the title is located on the upper right comer of the page, and the story begins on left.

Contributors, I know I'm probably gonna hear from you people .sooner or later about why the credit for your material only appears on this page so let me attempt to explain. In my attempt to keep down the amount of space each story occupied, I inadvertently forgot to place the author's name with his or her work. By the time many of the pages were already printed up, it was too late to do anything. Rather than reprinting all that stuff and escalate the costs any further, I just did the same with the rest of the zine so as not to show any favoritism.

Those are the most noticeable flaws. If you find many others please feel free to let me know. I want to know how to put things together as best as possible so if and when there is to be a second issue, I'll be better prepared. Though the future of the zine is rather shaky, if you think there is enough promise in it, please let me know. I welcome all kinds of mail. Making replies is another matter. Please send a self address