Views of Intimation is a gen 57-page anthology edited by Elaine Tripp. 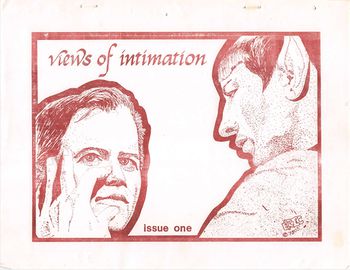 Many of these same fans also contributed to Alpha Touch.

From an ad: "A fanzine exploring the personally emotional themes of ST, such as the friendship between Kirk and Spock, and the painful memories of lost loves." [1]

It is labeled "issue 1" but there are no other issues. A fan commented: "A small zine, Views of Intimation, was also published this year and given the designation 1, though as far as I’ve been able to discern there are no others in the series. This was not an uncommon event in these early years. Zines appeared and disappeared as fans’ interests and real life demands changed. [2]

Regarding the Lack of Page Numbers

PLEASE NOTE: There are no page numbers listed in this contents because the page numbers in the fanzine are not in order. We are sorry to inconvenience you, but due to incredible technical difficulties, we could not hold to our original format. Thank you.

A first effort, this zine is unfortunately not very good, either in content or production. Of its three short stories, the best is 'Moments of Daybreak and Darkness,' a tale of a vengeful and crazed T'Pring trying to force an injured Spock to choose between in mother's life and Kirk's. The plot is rather far-fetched but does provide a degree of dramatic impact. The other two fiction pieces have less to recommend them; 'Aftermath' is a sequel to Teri White's The Beast in which Kirk senses Spock's continuing distress over the ordeal Spock has suffered and offers comfort. The idea is a nice one and would have lent itself well to a vignette, but the story presented here is too long and overly sentimental. The final fiction offering, 'Epilogue' is a post-ST:TMP story in which a delighted Kirk welcomes Spock back to the Enterprise by bringing aboard the Vulcan's possessions. The plot is insubstantial and fails to sustain interest. The zine's poetry is average, while its art varies in quality, some very good, and all suffering in the reproduction. Also in the zine are two non-fiction selections, 'Star Trek: The Motion Picture -- A Trekker's View,' one fan's account of seeing the movie for the first item; 'A Very Ugly Fact about Every Nuclear Power Plant,' and article which for some reason is inserted in the middle of a story. Both of these inclusions seem strangely out of place in view of the zine's description as stated on the title page: 'An exploration of the more personally emotional themes of Star Trek...' Which brings up a question about the title of this zine. 'Intimation' is defined by Webster as 'an intimating, a formal announcement or notice; declaration; a hint; indirect suggestion.' It does not refer to emotions. The word 'intimacy' does, however, and would have been the correct choice here. Finally, the zine's production values are sorely lacking. Space is wasted, the lines of one story are 1 1/2 inches apart throughout, some pages are blank, and others have little information on the. Reproduction quality is poor. And typographical errors and misspellings are numerous and distracting. This zine is disappointing and not recommended. [3]