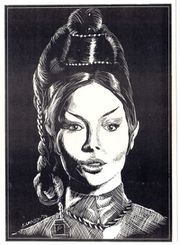 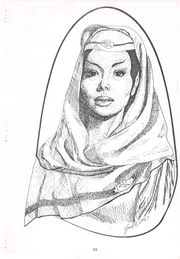 T'Pring is a Vulcan character who appears in one Star Trek: The Original Series episode.

T'Pring and Spock were betrothed as children. When Spock returns to Vulcan for his Pon Farr in the episode, Amok Time, T'Pring challenges this agreement, in an attempt to break the engagement and marry Stonn (played by Lawrence Montaigne) instead.

Arlene Martel, who played T'Pring, was often cast as a BOTW on 1960s genre shows such as The Man from U.N.C.L.E. and The Wild Wild West. She was also known as Arline Sax. [1]

Martel revealed in interviews that she felt T'Pring's Empire-waisted, A-line dress gave the appearance of a maternity dress. She speculated that they were trying to suggest she was pregnant, and she played T'Pring that way. Lawrence Montaigne helped out by the way he delivers the line "The woman is --" The next word could be mine or pregnant, but T'Pau shuts him up. Leslie Fish and other fan authors noticed and used this in various writings.

She said she enjoyed working on Star Trek, although she found it difficult to resist laughing at William Shatner's constant barrage of risqué wisecracks and puns. Describing herself as an impulsive, feeling person, she learned to play T'Pring exactly the opposite; director Joseph Pevney kept saying "Give me less, not more," until she was tightly concentrated into cool rationality. She realized that T'Pring always thought things through before taking action.

I’d played women with different accents and of different ethnicities, and this was a very cultured, sophisticated woman who insisted on specificity and got what she wanted, not because she was calculating and manipulative, but because she was smart.[2]

Born in poverty in the Bronx, Miss Martel was sent to boarding school and the Performing Arts High School by her mother's employer. She was almost cast as Elizabeth Dehner in "Where No Man Has Gone Before" and Sylvia in "Catspaw" before finally being cast as T'Pring.

The young T'Pring displayed on Spock's personal viewscreen was Mary Elizabeth Rice. When the photograph was taken she was very ill, but was told this would contribute to her portrayal as she was supposed to be a serious Vulcan child.

T'Pring does not appear in the Star Trek reboot movie, Star Trek (2009).

T'Pring often does not come off well in tie-in books and comics. In Diane Duane's novel Spock's World, she is dissatisfied after the events portrayed in "Amok Time" because things did not go exactly as she had planned. Stonn worries that she still desires Spock, and dies during an attempt to artificially induce pon farr with drugs. She blames Spock for everything. She devotes all her energy and finances into setting up a massive planet-wide movement to get Vulcan to shun the Federation, in order to make Spock choose between them. It almost works.

Dorothy Fontana's novel Vulcan's Glory takes place during Christopher Pike's time as Captain of the Enterprise, and Spock is described as having difficulties reconciling his chosen career in Starfleet with his eventual marriage to T'Pring. He has delayed announcing and going through with their marriage for a number of other reasons as well, not the least of which is that "even when they were children, she had had a shrewd aloofness, a calculating coldness about her." When he proposes to announce the marriage but delay the actual ceremony until pon farr, she insists that he pay "the bride price" until then. On Vulcan, after a marriage is announced, the man must send monthly payments to to the woman's family even if she is of independent means or has her own career. "The bride price varied according to the husband's wealth. By every standard on Vulcan, Spock was personally wealthy, and the price extracted for T'Pring would be very high." T'Pring goes through this conversation with Spock in the luxurious garden of her home at In-Yar, with Stonn waiting in the shadows nearby.

Since then, there has been some attempt among fans to rehabilitate her character, retelling the story from her perspective, and using the "reboot" film to portray her as having less selfish qualities.

Some attempts have been made to redeem Stonn as well. He's described in "On Restless Pinions" by fan writer what_alchemy as a gifted sculptor and an expert in ceramics. In Rabble Rouser's "Sympathy for the Devil" he followed Sybok for a time, but didn't agree with Sybok's quest for Sha Ka Ree as a real place rather than a state of mind; he subsequently became an opera singer, exploring the value of emotion in that way, and accustomed to performing before Earth audiences.

One objection to the reboot Spock/Uhura canon ship was "But what about T'Pring?" A common fanon assumption is that Spock and T'Pring were never bonded in the reboot universe.

Whatever the status of her engagement to Spock, it is usually assumed that she (and Stonn) died when the planet Vulcan is destroyed.

However, T'Pring does make an appearance in the official Star Trek Ongoing comic series (IDW) approved by writer and producer Roberto Orci [3], specifically she appears in the 'After Darkness' issues in which it's revealed that she and Spock were bonded in the alternate reality too, but Spock broke the bond when he left Vulcan for Staffleet Academy, therefore allowing both T'Pring and himself the freedom to choose a different mate. It's implied that they were childhood friends, thought Spock didn't knew she had survived the Vulcan diaspora.

In 2007, Arlene Martel played a Vulcan priestess in the final scene of fan film Star Trek: Of Gods and Men; the priestess is unnamed, but may have been T'Pring. [6] Ironically, this fan film featured the wedding of Uhura and a Vulcan -- in this case, Stonn (again played by Lawrence Montaigne) -- two years before the Reboot film came out.