Kismet is a Star Trek: TOS story by Dani Morin. 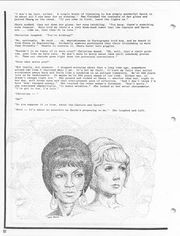 last page of the story, the artist is Nan Lewis

It features what some say was one of the earliest femslash stories published in a media zine.

It was published in the print zine Obsc'zine #2.

"Uhura and Chapel, lovers, speculate on the gossip that Kirk and Spock are, too."

Nice point that Chapel's infatuation with Spock is a cover for her true love. [1]

'Kismet' is a gentle ironic short short and well worth it. [2]

... the lovers are Uhura and Chapel. They make love, then laugh about how Chapel obfuscates their relationship by supposedly mooning over the perennially unavailable Spock. And they laugh about a rumor they heard that Kirk and Spock are lovers — but neither really believes it is true. [4]

[cosmic-llin]: ...Kismet, the earliest extant femslash fic with a known date (1977). The speech says that it doesn’t pass the Bechdel-Wallace Test because it’s “about lovers Uhura and Chapel speculating about their suspicions of a Kirk/Spock relationship”, and further suggests that it is “not a great example of femslash”.

First of all, for a piece of storytelling to pass the Bechdel-Wallace Test, it doesn’t have to exclude women talking about men, it just has to include women talking about something other than men. In this fic, Chapel and Uhura talk about drinks, dressing, their evening plans and the difficulties of being queer, and exchange expressions of affection, not to mention the non-verbal communication of their several-paragraphs-long sex scene.

As for Kirk and Spock, they are mentioned in two ways. First of all, Uhura and Chapel talk about using the suggestion of Chapel’s attraction to Spock as a smokescreen to hide their own relationship. Secondly, this transitions into them discussing (and being amused by) a rumour that Kirk and Spock, like the two of them, are secretly together.

I know I’ve seen the occasional fic that used a femslash pairing as little more than a prop for a dudeslash pairing, but I don’t think this story is an example of that. Kismet, as well as being a hot and sweet femslash fic, is a story about people failing to pay attention to things that are right under their noses. The crew of the Enterprise are so distracted by the mystery of whether Kirk and Spock are an item that they don’t even stop to consider that Chapel and Uhura might be. On another level, Kismet is a commentary on and a challenge to the fandom of the time - it’s encouraging fanzine writers to look beyond the established pairing of Kirk/Spock and open their minds to other possibilities. For me, the mention of Kirk/Spock in no way lessens the genuine connection between Chapel and Uhura in this wry and thoughtfully executed story. [5]