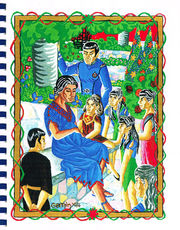 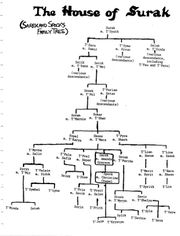 It is a sequel to Something to Remember.

The novel-length sequel to “Something to Remember”, set post-ST:TMP, begins six months after the end of the first story. Spock takes the now-pregnant Christine back to Vulcan for a family reunion in order to present her to his clan for inspection and acceptance as one of them; in the process, they both must deal with certain ultraconservative elements of the clan, who are not pleased that another member of their ancient and revered family line has chosen a Human wife. This is driven home to Spock all too clearly when a cousin of his commits a horrifying (especially by Vulcan standards) act against Christine—in the name of preserving the Vulcan race from further contamination by Humans. [1]

As husband and wife, Spock and Chapel journey to Vulcan where the Human female is treated to a cool reception by most of his clan. Pregnant with twins, and determined to win the acceptance of Spock's family, an acceptance Amanda has never full won, Chapel risks her life and that of her unborn children as she finds her self the target of blind racial hatred. [2]

Author's Notes from the Zine

For the benefit of those of you seeing this fanzine for the first time at a convention and wondering what the heck you've stumbled across, this is a sequel to a previous story of mine called "Something to Remember". Both are Spock/Christine stories. Don't let yourself be scared off if you haven't read the first story; all the references to it in this sequel have been fully explained . I'd like to thank Bill Hupe for patience above and beyond the call of duty in managing to make it through two or three typings of this, the longest story I've written to date, and in waiting until the last minute for me to finish up all the artwork so I could get all the material for this fanzine to him by the intended time of publication. I'11 once again include my address for the benefit of those who might like to write to me with comments, and I'd be especially interested this time to know what you thought of the artwork, since I darn near killed myself (at least in terms of lost sleep) getting it ready in time. Also, since I have tentative plans to continue these two stories as a series, I encourage you to write to Bill and tell him if you enjoyed "Something to Remember" and Blood Ties enough to want to see more stories in this setting. Blood Ties is dedicated to J.M. Lane, in gratitude for her invaluable assistance—which took the form of comments, criticism (constructive), and general ego-boosting—in the various stages of editing and rewriting.