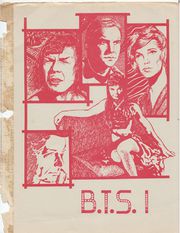 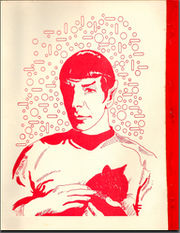 back cover by Vel Jaeger 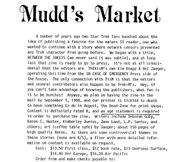 Between the Sheets is a 155-page het Star Trek: TOS anthology edited by Vel Jaeger. Art is included with the publisher's permission.

From Datazine #32 in 1984: "Finally! For all you flaming heterosexuals -- a new R-rated zine full of (hopefully) lurid tails -- er -- tales of our favorite indoor sport. We are now looking for submissions full of explicit sportsmanship. We think the title says it all."

From Datazine #54: "... All artwork is portrait-style, and quite safe to leave out on your coffee table. However, it will not be safe to let your modest maiden aunt read these adult stories. No K/S, but some of the themes are controversial -- ask for specifics if you are the timid sort."

In late 1990, Vel Jaeger announced a planned zine called "Between the Sheets 1.5: Beyond the Darkness":

A ST:TNG novel by Cyndi Bayless Overstreet. AGE STATEMENT REQUIRED. Three members of the Enterprise crew must rely on more than wits to survive in a primitive society. No "/", but to tell more would be cheating. Scheduled for mid 1991 publication. SASE's now being accepted for final price notification. [1]

This zine was never published.

In late 1990, Vel also announced a second issue of "Between the Sheets":

In answer to the cries of "More!" Already in hand is a sequel to Junius' "Right of Passage" (but written by Ann Zewen); now accepting submissions of adult stories and poetry suitable for the quintessential heterosexual reader. SASE for contributors guidelines recommended.

This zine was also not published.

The Original Art for the Covers

Vel Jaeger writes of original artwork: "The scan in black is directly from the original artwork; the first & only printing is in red on a soft grey card stock, with red cloth tape binding. Front cover is a montage I put together with images from some of the interior art, which was reduced to 20% of the originals, then pieced with red tape." [2] 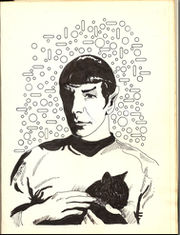 the original art by Vel Jaeger