Alternaties is a K/S slash and het Star Trek: TOS fanzine. It was published by the Intergalactic Underground Press and edited by Cheryl Petterson There are two issues. 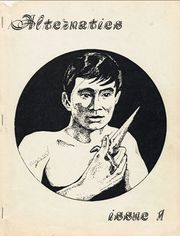 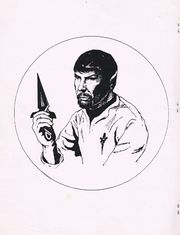 back cover of issue#1

[Rogues]: A parallel Kirk and Spock from an evil Empire universe (not the same one our Kirk went to), escape from there with the purpose of enlisting our Kirk and Spock to help them start a rebellion to overthrow the Empire. They commandeer the Enterprise in the guise of the "good" Kirk and Spock, along the way causing mayhem and engaging in extremely erotic encounters. Things get very exciting and filled with tension as the Romulans enter the scene and the "bad" counterparts of Uhura and Sulu come after the escapees. Mix this in with a wonderful invention called "Jump", great action, precise characterizations, good use of technology, and this story is one of the best I've read. There were some excellent touches such as the first moment that our Kirk sees his twin and he thinks it's a mirror, or the exchange on the bridge about having a cup of coffee during a crisis. But, one of my favorite scenes, in this or really in any other work, was the two Kirks and Spock engaging sexually together and the finale when Spock commands Kirk. I won't give any of it away, but suffice it to say, it was one of the most powerful, insightful, and well-crafted scenes that I have ever read. This story, alone, was worth the entire zine. I know nothing of this author, but if anyone out there does, please tell me. The ending left open the definite possibility of a sequel, so maybe it was written. If this is any indication of Beth Carlos' talent. I want more! [2] 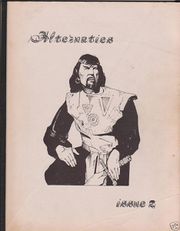 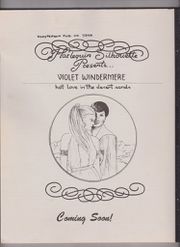 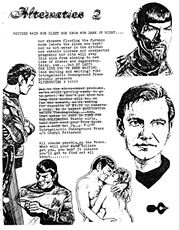 page one of a flyer for issue #2 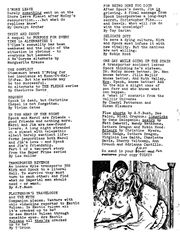 page two of a flyer for issue #2

Summary from the publisher: "This zine has something for everybody...The stories are mostly Spock-centric, so if you love a certain Vulcan, this one's for you!...And boy, does he get around -- we have Kirk/Spock, Spock/McCoy, Spock/Chapel, Spock/and various others, including T'Pring...And of course, more Kirk/Spock, because we all know that's our one true pairing!!!...Variety is the spice of life -- and this zine is extremely spicy."

[an unknown story in this issue?]: I especially was disturbed by the alternate universe in Alternaties where Spock, going into pon farr away from his wife, is melding with his wife while mating with his daughter's body. I have found little in K/S as unsettling as this idea. But I like the folks at Intregalactic Undergroud Press — nice people. [3]

[Transporter Revenge]: Extreme situations call for extreme measures, and that's what one gets in this wonderfully wiid and daring tale of sex, semen, and survival. I enjoyed the author's handling of this subject. The Mirror Universe Kirk and Spock must face their ultimate demise, but neither one will give up or allow the other to die. It was bitingly gritty, graphic, and wrenching to both of them. The story was also improbable and sensational, but for the story purposes it certainly was thrilling. What if Kirk and Spock faced certain death? The author answered this question in a thoroughly shocking way, which was at the same time mildly repugnant, strangely compelling, and greatly entertaining.[4]