Jean Lorrah is a writer and editor of fan fiction and pro novels. Jean was also a frequent Guest of Honor at cons.

Her Star Trek writing includes the NTM-universe and Kraith. The first NTM-verse zine was The Night of the Twin Moons, published in 1976.

Her collaborations with Jacqueline Lichtenberg include the Sime~Gen shared universe, in which both write profic novels. "All the work by Jacqueline Lichtenberg and Jean Lorrah revolves around themes of an "exchange of lifeforce." Both of them have written "traditional" vampire novels and stories (not in the Dracula vein), but their major work has been reinventing the vampire archetype in the Sime~Gen series." [1]

Lorrah was one of the hosts of the Writing for Fanzines workshop.

On Fandom, and Being a Fan

When I read a book or watch a film or a TV show, of course I expect to enjoy it while I am reading or watching. However, some works give me more than that—an added value in that they provide something to think about after consuming them the first time. They may spark conversations with others who have experienced them, and if that happens it is virtually certain that I will want to experience them again. A work that affects me that way gives me double or triple the value of a work that ends when I have seen the last scene or read the last page, for I have the added enjoyment of re-expenencing that work and discussing it with other people

All of us who read or watch films or television regularly probably have this experience with a fair percentage of the works we consume—perhaps as much as half of them as we learn what kind of work and which authors, producers, or directors are most likely to produce the desired response. If the same works produce that effect in many people, they become classics. If the number of their consumers is smaller, but loyal and persistent, they are called cult classics.

But for some people there is another potential layer of added value: a work may inspire me so much that I cannot help but create something in that universe. I go beyond re-experiencing or discussing, and become a fan.

Fans create in many ways. Some produce traditional artwork. Some costume. Some make videos or write songs (called filksongs when the genre is science fiction). But the largest number of fans wiite stories that allow them to share adventures in the universe and often with the characters they have come to know and love. This is not a new phenomenon! It is as old as storytelling, and one of the greatest sources of fan fiction though nobody calls it that—is the work of the ancient poet Homer. Literally hundreds of writers through the ages have not been satisfied with only two works, The Iliad and The Odyssey, in that fabulous universe, and have felt compelled to add their own. [snipped]

The same thing happened with the story of King Arthur and the Knights of the Round Table, first created by Geoffrey of Monmouth in his Historic Regum Britanniae (History of the Kings of Britain). From Morte d'Arlhur through Idylls of the King. Camelot, and The Mists of Avalon, fanfic all, though none dare call the name.

We make no claim that Sime~Gen belongs in the company of these undisputed masterpieces. We can, though, demonstrate that it stands alongside Sherlock Holmes, Lord of the Rings, Star Trek, Harry Potter, and numerous other universes that have inspired the creation of fan fiction by a substantial number of their audience.

For me, and for others so inclined, the discovery of a universe so compelling that it practically forces me to create within it is an event that occurs only three or four times in a lifetime. Only Star Trek, Blake's Seven, Alien Nation, and Sime-Gen have so inspired me—and I have had the great good fortune of being admitted as a professional writer into two of the four. Yes, professional writers write fanfic. What's good enough for Shakespeare or Tennyson is good enough forthe rest of us! [2]

Attitudes Toward Fanworks Based on Her Universes 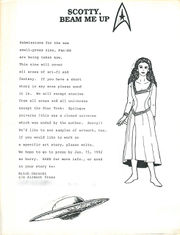 a flyer for a proposed zine that would not accept content from this universe: "We will except stories from all areas and all universes except Star Trek: Epilogue universe (this was a closed universe which was ended by the author. Sorry!"
In 1989, Jean Lorrah explained why she didn't want other fans to write in some universes, but that other were fair game:

Some of you may be familiar with EPILOGUE, which is one of my TREK universes, which is a closed universe. That is, it is a complete novel in two volumes — eight chapters — and the eight chapters tell independent stories, with beginnings, middles and ends. But they are not really independent of one another, even though the first three appeared in TRISKELLION, way back in the early 1970’s. They don’t leave you satisfied, they leave you wanting the rest of the story, but it’s closed. There’s no more EPILOGUE. I will not write any more and no one else will write any more that in official EPILOGUE. You cannot prevent someone else from writing a story, but I will not recognize it—no matter how brilliant it is — as part of that universe because that one is complete...

...If you’ve read it, then you know it’s about a war, in that case. You see, when you write fiction you translate your experience into something else. There was no war involved in my experience. But, you remember, EPILOGUE begins with Kirk as a very, very old man . . . facing senility . . . losing his memory . . . having lost the people who were like family to him . . . having lost his position. He’s been retired, not kicked out. He’s just grown old and been retired. It’s facing up to loss . . . and I was working off my own frustrations writing the first part of EPILOGUE. And then I came back and wrote part two after I had lived through and come to terms with that period of my life, and I had a book to complete. And then the artist goes on and finishes the story that was begun out of the emotion of a particular period. But it’s probably because it is so close to my own life that I don’t want anybody else fiddling around with it. It’s complete in itself. Now, that’s one kind of universe, where you as sole author, or perhaps with a collaborator write a particular thing, you finish it and that’s it. You don’t do any more.

Now, if you have read THE NIGHT OF THE TWIN MOONS, FULL MOON RISING, NTM COLLECTED VOLUME ONE and NTM COLLECTED VOLUME TWO, you are heartily invited to write in that universe. There are plenty of other stories to be told that I don’t have enough time to tell. All I ask is if you want to write in the universe, please send me an outline before you start to write, so that if there is an inconsistency — which will probably be because I knew of something planned that hasn’t shown up in a story yet — then usually very minor tinkering can take care of that when the story is in outline form. [3]