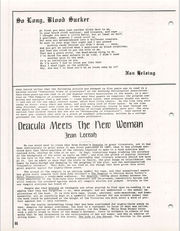 first page as it appears in the zine Dracula

Dracula Meets The New Woman is an essay by Jean Lorrah.

It was first written in 1975 for an academic journal, and then printed in 1980 in the zine Dracula.

Jean Lorrah writes that the following article was whomped up five years ago to read in a section called "Femininist Views of Literature" at the Kentucky Philological Association. Then three years ago she read it at the Popular Culture Association in the South, in a section on "The Vampire in Literature." There were four papers on vampires; the program committee had assigned them a bad time — right before lunch, when everyone sneaks out early and one of the two small lecture rooms, which held fifty chairs. By the time they were ready to start, every chair was taken, and also every inch of floor space. By the time they finished, people were lined up in the hallway listening, trying to hear through the two doors to the room. And this was a meeting of college professors, mind you. I The only section that outdrew theirs was the one on "Pornography in Literature"! Jean wanted me to warn you readers that this is a piece of academic scholarship, written by a college professor for the edification of other college professors.

The attack of the vampire is an obvious symbol for rape, and that sensational aspect has given every vampire tale from John Polidori's The Vampire to Chelsea Quinn Yarbro's Hotel Transylvania a ready-made audience. Yet Dracula, coming about midway between the^ first adaptation of the folk-tale into literature and the present,, immediately became and still remains the standard against which all vampire stories are judged. Dracula is the one vampire everyone has heard of.

People who read Dracula as teenagers are often started to find upon re-reading it as adults that they had forgotten — or, when younger, had not understood — the sexual implications of the book. It is rife with rape, incest, adultery, sado-masochism, and homosexuality, all so carefully kept at a symbolic level (except for one notable scene) that the book could be published at the height of the Victorian era with never a word of protest against sex — only violence.

But the really interesting thing that has been overlooked for eighty-three years is that, despite the sexual overtones, the book is a testament in favor of what was called, in the last quarter of the nineteenth century, the New Woman. While Bram Stoker never took a public stand in favor of the woman's movement, there is evidence in others of his works that he was interested in the relationship of men and women, and was an admirer of strong women.

The characters in the novel consist of two male adversaries, Dracula and Van Helsing, who share a common dominance over others; a group of almost interchangeable younger men, and two clearly contrasted women, both young, but one, Lucy Westenra the lady who is helpless against the dominance of the vampire, and the other, Mina, the New Woman who fights off his oppression, hampered only by the well-meant efforts of the men "protect" her.

Meanwhile, back in England, Mina is invited to visit Lucy Westenra. Strong contrasts are drawn between the two women; Lucy is wealthy and beautiful — aside from those two attributes, the only thing we are told about her is that she is "sweet". Mina, on the other hand, is an orphan who has been trained as a teacher in the orphanage where she met Jonathan. However, through her own efforts she has learned shorthand and typing (at a time when secretaries were male), to aid her husband in his law career. Mina refers to herself as a New Woman, and Stoker is obviously setting her up as an ideal of the type. She and Jonathan correspond by shorthand, and Mina also keeps a diary. Mina and Lucy met at school, but since then Lucy has been "being a lady", that is, doing nothing, while Mina has been teaching school, learning a second career, and sensibly waiting for the man she loves to finish law school and pass the bar before they marry. Mina Murray and Jonathan Barker are presented as very much in love, yet extremely practical in their plans for the future.

Dracula, however, is apparently not interested in Renfield at this point. Stoker never has a male vampire bite a man or a female vampire bite a woman, and when some vampires prey on children, the sex of the children is never revealed.

Meanwhile, Mina learns that Jonathan is in a hospital in Budapest, and immediately leaves to marry him and bring him home. Stoker thus removes her from the scene while he plays on bigamy, incest, and homosexuality in the next few chapters. Mina is to be kept pure, until the great defilement scene brought about by the decision of the men, in the third part of the book, to treat her "like a woman".

Lucy's funeral is dignified and sad, but afterward Stoker indulges in a scene that is meant to bring to light all those subconscious sexual implications. Arther Holmwood remarks that since he provided a blood transfusion for Lucy, "he felt ... as if they two had been really married, and that she was his wife in the sight of God." Van Helsing can hardly control himself, and when he is alone with Seward he goes into hysterics. He goes around and around the subject in his horrible fake-Dutch accent, until finally Seward forces him to explain what he finds so funny about Holmwood's remark. "If so that, then what about the others?" he replies. "Then this so sweet maid is a polyandrist, and me, with my poor wife dead to me, but alive by Church's law, though no wits, all gone — even I, who am faithful husband to this now-no-wife, am bigamist." This is as far as Stoker dares to go, but just previously Van Helsing has said that he felt like a father to both Lucy and Holmwood — and thus there is the further implication of incest. What is more, the blood of all four men has eventually gone into Dracula's veins, as has been pointed out several times — and if blood equals marriage, there is the hint of homosexuality.

These unsavory implications are all associated with Lucy, whose only crime in life was to be useless. There is worse to come. Now a vampire, she begins to attack children. They can find only one way to describe their assailant: her beauty. Each child tells the police that he met a "bloofer lady."

When Seward and Van Helsing finally piece together the meaning of Renfield's last words and go running up to Mina and Jonathan's room, they confront the most blatantly sexual scene in the book: "On the bed beside the window lay Jonathan Harker, breathing heavily as though in a stupor. Kneeling on the near edge of the bed facing outwards was the white-clad figure of his wife. By her side stood stood a all, thin man clad In black. His face was turned from us, but in the instant we saw we ... recognised the Count... With his left hand he held both Mrs. Barker's hands, keeping them away with her arms at full tension; his right hand gripped her by the back of the neck forcing her down on his bosom. Her white night-dress was smeared with blood, and a thin stream tricked down the man's bare chest which was shown by this torn-open dress."

The scene is the ultimate in sensationalism: the vampire -- read rapist -- has attacked his prey in her husband's bed, while her husband is it it!. Furthermore, he has not been content to make her his victim; he has forced her to participate, to drink his blood, to commit adultery. It must be said for Jonathan that never once does he blame Mina for any of this; such is their marriage that neither does Mina ever say, "If you had kept me in your councils, this never would have happened."

Dracula has done his best. Mina is corrupted, as is shown when the communion wafer, intended to protect her, burns her forehead. But does the New Woman yield to Dracula's power? Never!

Mina herself does not destroy Dracula; Jonathan and Quincy Morris strike the fatal blows But it is made obvious that they would not have been able to do so were it not for Mina's courage and intelligence. It is strange that for eighty-three years this book has been read without any attention to the facts given above; yet they are facts, and they do lead to the inevitable conclusion that, always secondary to being a suspenseful horror tale. Dracula is a tribute to feminine strength and an example of the benefit the New Woman can be to the Modern Man if he can overcome his prejudices and accept her.

"Dracula Meets the New Woman" is Jean Lorrah's analysis of the Bram Stoker novel, which she interprets according to a feminist point of view, with some justification, for Stoker, like H.G. Wells, G.B. Shaw, and others of the period, was in favor of women's freedom. [1]