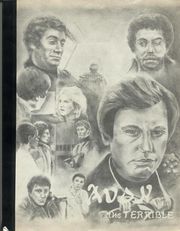 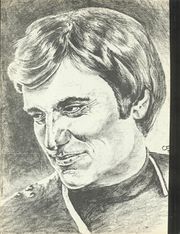 back cover by Linda Fairbanks

Avon the Terrible is a Blake's 7 114-page gen anthology. It is a fanzine devoted to Avon's darker side.

The premise is that every piece should be one of two things: either an original story in which Avon does something reprehensible (but in character) -- and then has to deal with what he has done -- or a story or poem examining why he did something of that nature in an aired Blake's 7 episode... We're hoping for lots of new, original stories and poetry. Even cartoons! No "/" please, but otherwise anything is welcome, either serious or humorous... WARNING: Your work will be edited for grammar by Jean Lorrah, and English teacher for 25 years. A professional writer, she may also make suggestions for smoothness or clarity, on which you will have the final say... By the way -- you can blame that old fuddy-duddy English teacher for the title and the premise, too! 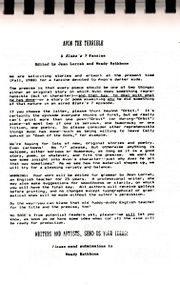 The stories I found the most interesting and memorable in this zine were "Puppeteer" (not to be confused with Puppeteer xBryn Lantry's A/B slash novella of the same title) and "Embers to Ashes." "Puppeteer" is a semi-humorous story featuring the puppeteer Carnell as a private investigator. Early in Series 4, various people come to him for help finding Avon. He gives them a questionnaire on Avon, which each of them answers completely differently! Very amusing. "Embers to Ashes," by an author who also did slash stories under various names in early issues of Oblaque, is the story with Avon's cross-sex clone, Ekho. She's working with Blake PGP. It turns out that the "Avon" of the 4th series was an imposter, and the real Avon is in the hands of Servalan, who intends to punish him for the death of her lover many years ago.

FWIW, Servalan's first name in this story is Mhairi.

I also especially liked Anne Collins Smith's poem "The Plaxton Principle," which IMO fit the theme of the zine better than any of the stories.

Another story with sex: in "Allegiance," Servalan seduces Avon both literally and metaphorically, but Vila saves the day.[1]

DISCLAIMER, SPOILER WARNING, ETC: I don't write, I only read and criticize...and I'm extremely biased. Major plot points might be revealed. And the second zine mentioned is slash, so stop reading when you get there if slash offends you.

"Avon the Terrible" Edited by Jean Lorrah and Wendy Rathbone, 1990. 100+ pages. Six short stories, some poems, some illustrations (you can tell what my priority is)

Not to be confused with Darrow's book, _Avon: A Terrible Aspect_ because these people can WRITE. Really, these stories are great! This was one of the first zines I ever read and I just reread it to make sure I wasn't waxing nostalgic. I wasn't. It is supposed to be "devoted to Avon's darker side" but only two of the stories, I think, really get to it. But that doesn't matter because they're all well-written.

My favorites are "Embers to Ashes" by Leigh Graham and "Puppeteer" by Aya Katz, with "Promises" by Jean Lorrah next.

"Embers" -- Servalan's grudge against Avon is purely personal and she's used the resources of the Fed to catch him, which she does at Terminal. She replaces him with a look-alike (so the 4th season is all _his_ fault) and keeps Avon imprisoned until GP. Then she puts him in a tank like the one Colonel Astrid in "Moloch" was suspended in. Oh..she also had a cross-sex clone of Avon made and programmed to kill him...but Ekho escaped and is now with Blake. The two of them, Vila, and Tarrant ride to Avon's rescue. Cally is alive, too, BTW, and I liked this Blake very much...

"Puppeteer" -- Carnell narrates a la hard-boiled detective when Blake, Cally, and Servalan all hire him (separately) to find Avon and/or Liberator. Carnell is now living on Jevron. This story is hysterically funny but you know it's leading to Gauda Prime so there's a nice kick at the end even as you're laughing. It's also mean to Blake, but I laughed anyway.

"Promises" -- the 4th season was all Orac's fault, because of an order to protect its master that Dorian put in while fixing it.[2]

I've been signed on to this mailing list for a few weeks now, and reading everything, but this is the first time I've been inspired (as opposed to merely tempted) to reply to something. Your review of "Avon, the Terrible" brought back fond memories of my own reading of it. I agree that, despite the title, most of the stories paint Avon in a predominantly favorable light--but I didn't mind that either (at all). My favorite was "Puppeteer", and my second favorite was "Embers to Ashes", which is pretty close to your ratings. ("Puppeteer" gets the edge primarily for that clever printout of Avon's successive evaluations by Jenna, Blake, Cally and Servalan--frequently revealing, as they did, more about the evaluator than about the evaluatee!) On the other hand, I wouldn't dismiss the poetry so cavalierly. I consider most fan poetry I read to be just plain awful, but several of the poems in this zine were a cut above average, particularly the three by Ann K. Schwader, which home in on Avon's conflicting feelings about Blake... As for the other, slash doesn't offend me, but I don't read it either, so I can't comment on Ros Williams' novel, except to say that I find the very idea of pairing Avon with Carnell even more preposterous than I find most B7 slash pairings.[3]

Regarding the idea of Avon's evil twin showing up and doing the things Avon only says he'll do: There was a zine a while back called "Avon the Terrible" which was supposed to feature only stories in which Avon did dastardly things. Not surprisingly, most of the stories didn't meet that criterion, but there was one tale called "Embers to Ashes" by Leigh Graham in which Avon had an evil clone named "Ekho" (an evil female clone) that you might enjoy perusing.[4]