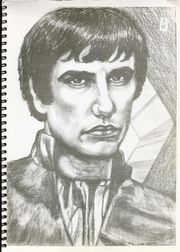 It was originally published as E-Man-Uelle #8 and again in Homosapien Too. After going out of print, it was reprinted as a standalone with a new by cover Whitby27 in February 1996 by Judith Proctor.

Archived online at Archive of Our Own: Puppeteer 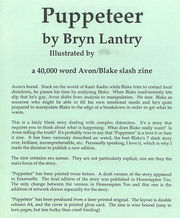 Avon's bored. Stuck on the world of Kasir Kadin while Blake tries to contact local dissidents, he passes his time by analysing Blake. When Blake inadvertently lets slip that he's gay, Avon shifts from analysis to manipulation. He sees Blake as someone who might be able to fill his own emotional needs and he's quite prepared to manipulate Blake to the edge of a breakdown in order to get what he wants. his is a fairly bleak story dealing with complex characters. It's a story that requires you to think about what is happening. What does Blake really want? Is Avon telling the truth? It's probably true to say that "Puppeteer" is a love it or hate it zine. It has been variously described as: weird, the best Blake's 7 slash story ever, brilliant, incomprehensible, etc. Personally speaking, I love it, which is why I made the decision to publish a new edition... "Puppeteer" has been printed twice before. A draft version of the story appeared in Emanuelle. The final edition of the story was published in Homosapien Too. The only change between the version in Homosapien Too and this one is the addition of artwork drawn especially for the story. [1]

An earlier version printed as 'E-Man-Uelle 8', 1987; this version printed in 'Homosapien Too', editor Julie 'Stew' Bozza, 1992, and again as a single-story zine from Judith Proctor

What can I say? I spent my late teenage years on this story, obsessively, over and over. To me now, the last third or quarter has - a fair bit of what I thought it had. Anyhow, it's history, my history.

"Avon's a weirdo. He sets out to psychostrategise Blake and falls in love with him. Poor Avon."

A few samples of the interior art by Whitby27

Blake, Avon, Cally, and Vila help a nomadic group of rebels fight the Federation in an effort to reclaim their primitive planet. Easier said than done in xBryn Lantry's dark and provocative tale, which refutes any attempt to easily encapsulate. Blake is at an emotional and moral crossroad and Avon is determined to pull Blake in one specific direction. If you enjoy angst at a thoughtful, intellectual level, you will likely enjoy this tale which serves as a reminder that Avon might have been a more than competent psychomanipulator.

Lantry's style is very dark and she makes her readers work. During the reading, I varied between liking the story, admiring the story, and disliking the story. I liked this novel much better when I had time to give it serious consideration afterwards. It's worth the effort and I recommend it. [2]

"Puppeteer" (Blake/Avon) by Bryn Lantry is a convoluted but beautiful story where: the action is in the emotions, everyone has multiple motives, and no one truly knows their own minds, much less understands their crewmates. A bit alternate, set sometime in the months before Star One but after Blake has already got the idea in mind, this is a wonderful character study of Blake and Avon, with Vila and Cally in strong supporting roles. Not my favorite type of story -- I think I prefer something a bit more straightforward -- but undeniably compelling and well written. [3]

I usually adore almost any B/A story Bryn Lantry writes, but I had some problems with "Puppeteer" in _Homosapians Too_. It will probably grow on me with subsequent readings. Bryn's stories always do. [4]

Do slash stories need explicit sex scenes? Not always, no. It depends a lot on the story. The best example that comes to mind is Bryn Lantry's novella, Puppeteer. Not the draft version in E-man-uelle (although that wasn't too bad), but the fully revised version in Homosapien Too. The editor rated it as the best B7 slash story ever. Now, admittedly as Bryn's sister she might have a slight bias, but it is an extremely good story. Although the relationship between Blake and Avon starts out pretty intense, and develops down a rather troubled route into a sexual relation ship, there isn't any explicit sex in the story. None the less, it is a very slash story. It's a bit difficult to explain unless you've read it. All I can say is that Bryn can make it work, whereas most writers probably couldn't. [5]

Bryn Lantry, there is an author who puts words together like I like, and interprets the characters the way I see them, or recreates them in such a way that I like them even better. Her Blake usually has a wonderful sense of humor and wonder. "Puppeteer" is one of my all time favorites, for characterization, plot and style. [6]

I don't know, I'm a bit to writing what lots of people are supposed to be to art - I know what I like, but I don't know whether what I like would count as good writing. For me, 'good writing' is that which gets the story/plot/emotions across in a clear and unambiguous way that is enjoyable to read. From that point of view some of the most lauded writers in slash fandom fail repeatedly because I don't understand what they are getting at. Bryn Lantry leaps to mind, here. I have read (for instance) "Puppeteer" several times and I am no closer now to understanding what she is trying to tell me than I was when I first read it. I don't have this problem with all her stories, but that one seems particularly impenetrable. That could be me, I am a very simple teddy, really.

It's not just slash I have this problem with, some published writers leave me wondering what on *earth* they are talking about - and if they can't be bothered to be clear about it, do I really care? [7]

This novella takes up the rest of the zine. I loved it, hated it, and it drove me crazy. I alternately thought it was brilliant and abysmal; loved the dialogue (which makes up most of the story) and was impatient with the story, which meandered a lot without going anywhere.

I liked the way it used the aspects of Blake that I most dislike -- the holes in his personality -- as part of the plot. And this was a mellower and kinder Avon than I am used to thinking of, which was a plus too. And for most of the story they are tossing back and forth clever dialogue of the kind I most love, playing a clever game of word-based one-upmanship that escalates as each character wins and makes counter-moves that reach nearer the emotional heart of each other and of the story. The story itself parallels this, as political intrigue against the Federation is carried out and the interpersonal theme develops a sexual edge that culminates in the seduction of Blake -- with a plot twist to follow, then another plot twist. Illusion and deception interwoven with half-truths and truths. Themes of suicide and sexuality carried out with acidic precision.

I love all these things. I adore clever, witty, snappy battles of dialogue. I love plot twists, especially ones I can't anticipate, and I didn't see these coming. And these twists made perfect sense in terms of character and setting. I like sex and suicide with a hard, detached edge.

For all of this, I'd call this a five-star story.

Unfortunately I kept getting impatient. I wanted the story to be more structured, more clear, less meandering. It puttered despite all the crackle and pop. The plot for the most part was boring and slow -- for which I'd call it a two-star story.

Finally I concluded that I'd have been thrilled with this story if it had been, say, ten thousand words instead of forty thousand.

Waspish and unwise Blake snapped, "That will do with the strip tease." Avon smiled. "Honesty at last. I thought you'd never mention that you find me ruinously handsome." "You're not queer, you're just generally perverse. You only relish the bizarreness of it, don't you?" "I can't resist you undignified, Roj. When you bleed and lie and lose your temper. I like your pitfalls and your inconsistencies and your injuries." Asking, "May I?" he stroked Blake's ribs with the backs of his fingers, oddly deferential. "I like your secret, ignoble places. I want to be let into them."

Puppeteer (published as a stand-alone) is one I didn't like quite as much because its plot is so over-complicated I can't follow it, and there isn't enough sex for this reader. [9]

This is also on the internet, but I'd never read it there. What I did know was that x_los and elviaprose really liked it, and I ... sometimes like Bryn Lantry B/A and sometimes don't. Anyway - I thought I'd give it a try, but this is one of the ones that I don't like much.

The writing is very hard going - but more than than for the first 30 or so pages very little happens. Then a lot happens, and it is quite interesting (if really grim - but it's bolder in veering away from canon than almost anything else I've read in this pairing, and that is to be lauded), but again I have difficulty connecting with it as much as I would like because character motivations are obscured from me (slightly on purpose, but I also resent the fact that not only do I not understand what's going on - it's slightly implied by intros and comments etc that this is because I'm not a clever enough reader), and I wish the prose was cleaner. I find Blake a bit weak, too, which is my constant complaint, but in an interesting way here I guess. One wonders how he will lead the crew after this - presumably ... he won't be able to, which is quite nice given that he made the wrong choice in order to make that possible.

One other thing to mention is that Avon isn't a puppeteer in the novel. Which a) doesn't surprise me as he'd be crap at it, as this story proves (that's something I do like about Puppeteer - that he is so so bad at getting what he wants, and that's why it's OK that Blake is a bit rubbish too) and b) is a bit of a shame, because one of my all time great fic wants is a B/A fic where Avon is basically Travis. It's even more fun if he's Carnell.

I’ve finished reading Puppeteer, I wish I hadn’t. It’s a really well written fic, but unlike normal angsty fics, this one is uncertain and dark, and I don’t want to accept the ending. To put it simple, it’s an AU where Avon tried to manipulate Blake to give up the martyr complex and choose the way he chose for himself and Anna. And we all know he can’t win. [11]