The IDIC Epidemic is a Star Trek pro novel written by Jean Lorrah. 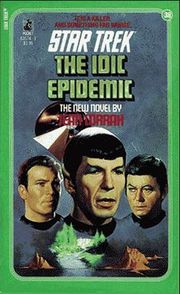 From the book jacket: "I.D.I.C. - Infinite Diversity in Infinite Combination. More than just a simple credo, for those of the planet Vulcan it is the cornerstone of their philosophy. Now, on the Vulcan Science Colony Nisus, that credo of tolerance is being put to the sternest test. For here, on a planet where Vulcan, Human, Klingon and countless other races live and work side by side, a deadly plague has sprung up. A plague whose origins are somehow rooted in the concept of I.D.I.C. itself. A plague that threatens to tear down that centuries-old maxim and replace it with an even older concept... Interstellar War."

February 12, 1988 is the official publication date for THE IDIC EPIDEMIC, my new Star Trek novel from Pocket Books. I hope you will all enjoy this one as much as THE VULCAN ACADEMY MURDERS, to which it is a sequel. I did a lot of fun things in it, some of which will be apparent only to fen (justasyoufoundwithVAM). ButIalsogottodosomeinterestingfore shadowing, such as providing the first step in Federation/Klingon cooperation —knowing there was a Klingon in the crew in ST:TNG (I wrote the book last spring and early summer), I simply put the rationale in the book, including the first Klingon accepted to Starfleet Academy (no, Worf isn't the first; it happened in Kirk's day), and Paramount passed it without a hitch. In fact, I never have any problems with Paramount; I doubt any author does who knows Trek as well as I do. They wanted "Dr." put in front of "McCoy" in one line—big deal! I had a scene in which at the end of a chapter a teenage boy may or may not have escaped an explosion, and they asked for more hints that he escaped—a bit peculiar in that they weren't bothered by Wesley Crusher being graphically run through with a bayonet in "Hide and Q"! Perhaps Paramount's standards people distinguish between old and new Trek in levels of sex and violence in print as much as on screen. That could make new Trek very interesting to write! Anyway, my two experiences say, if you really know Star Trek, Paramount is not going to give you any hassle. Pocket's current Trek editor, David Stern, is another matter. He seems to take his job more seriously than some, but he's a bit overzealous about revisions. He had a whole raft of change she wanted me to make, one of which I agreed made a major improvement in suspense. Many of the others, though, would have ruined the structure or violated established Trek fact. Fortunately, he is willing to accept the author's integrity when she explains the why's and why not's. All in all, he's a good editor who put his finger on one flaw that I'm glad didn't go through. That made it worth a bunch of trivial changes that made no difference whatsoever, and having to argue and explain to maintain my original where changes would have spoiled the book.[1]

The book contains recognizable cameos of the original cast of Blake's 7 (as the Enterprise's quarrelsome "Landing Party Seven") and Starsky and Hutch (as ambulance drivers).

Another pro Trek book that includes media cameos is Ishmael.

Incidentally Ms Hambly is not the only published Star Trek author to include 'other series' characters into Star Trek stories. Ms Lorrah has also managed it. In the 'IDIC Epidemic' the ambulance attendants described during the evacuation of the hospital strongly resemble two L.A. cops normally known as Starsky and Hutch. [2]

direct sequel to The Vulcan Academy Murders. A mysterious mutating plague on Nissus, a science colony with residents from dozens of species, interrupts the Enterprise's assignment to transport a group of dissident Vulcans to found a new colony. The disease is particularly troubling because it mutates into newer and more deadly strains in the bodies of mixed-species people, which seems to question the viability of the basic principle of the Federation: strength in diversity.

As with Lorrah's previous novel, this is technically well written, with smooth narrative flow and engaging characters. However, there are several flaws. First, there are simply too many characters to do them all justice; I would have preferred to leave Sarek, Amanda, Corrigan, and T'Mir out altogether -- not because I dislike them, but because that would have left time and space to develop T'Pina, Beau Deaver, Seela, and Korsal's sons into more three-dimensional characters. [Korsal is the one original character who gets enough page time, IMHO. And I'd leave Sorel and Sendet in, because they actually get tiny story arcs, whereas the other carryovers from The Vulcan Academy Murders are just there to no purpose.]

Second, Lorrah is far too concerned with tying people up in tidy romantic pairings. I grant you, everyone she ties up is Vulcan to some degree; she's established Vulcans as meddling matchmakers and biologically driven to find a bond in order to stave off pon farr; and the mess around T'Pina helps illustrated the IDIC principle -- but still. It annoys me, because life is not that tidy and I was far more interested in the plague than in Lorrah's not particularly compelling romance subplots.

Third, the ending flat-out doesn't work. It's too rushed; it doesn't explain anything. How did Klingon Imperial Plague get to Nissus in the first place, for example? Why did it mutate in such a curious pattern? The Klingons can't use it as a bio-weapon, but what about the Romulans? Will the people of Nissus be able to repair the strained bonds of their society? Lorrah provides a cure and resolves her romantic plotlines, but leaves everything else hanging, which I found extremely frustrating. YMMV, obviously!) [3]