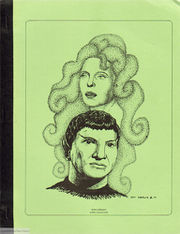 These stories center around Sarek and Amanda in their early relationship and marriage. Artwork by Amy Harlib, Virginia Lee Smith, and Barbara M. Stults.

Readers are forever trying to make the NTM universe and EPILOGUE fit together, just because I wrote both of them. They won't. NTM stories are consistent within themselves, and EPILOGUE is consistent within itself--but they will not fit together. If the war which precipitates the action of EPILOGUE happens, then the events of THE NIGHT OF THE TWIN MOONS simply cannot take place. However, if two different authors can write in different star Trek universes, why do readers who can turn from Kraith to NTM to Sahaj to Showcase with ease find it so difficult to accept that NTM and EPILOGUE are two different universes, just because the same author created both series?

There is a good reason for writing in various universes: it allows one to try out all possibilities. Take the book before you, for example. As all the stories are about Sarek, a pure-blooded Vulcan married to an Earthwoman, you might know that one of the questions being explored here is the age-old question of Vulcan sexuality. Out of Pon Farr, can they or can't they?

In the early days of Trek fan writing, the vast majority of stories assumed that Vulcans were asexual when not in Pon Farr. There was an occasional story in which Spock was different because of his human blood, but for a long time the orthodox view was the nonfunctional one. Two early Trek universes using this view were Kraith and QUARTET. This collection contains stories from both those universes. "Sarek's Meditation" is part of the Kraith canon--and suggests one interesting possibility given what we know about Vulcan physiology. However, that is not the burden of that particular story.

"The Missing Lesson" is not part of the QUARTET canon, but is based on the Sarek and Amanda of that series to explore what seems to me a very real problem that most writers who have written asexual Vulcans have ignored: assuming she has normal human needs, how could Amanda survive in a marriage to such a Vulcan for forty years? Oddly enough, despite the extremely explicit sexuality portrayed in Trek literature in the past five years or so, no one else has apparently dared suggest an obvious solution. I dared. My story was written more than two years and appeared in print more than a year before the movie, Coming Home, dared to suggest that in a loving relationship there is more than one way to accomplish physical satisfaction. [1]

"The Missing Lesson" is a serious story. "Touched" takes the question of the asexual Vulcan male and treats it as irreverently as it has ever been treated in fandom. I seem to have a need to explore every extreme, including the hilarious ones. A warning: when I first published this story, I never dreamed anyone would take it seriously. Some people have. Oh, please, readers--learn to tell when an author's tongue is firmly planted in her cheek!

"Visit to an Alternate Universe" is another story in which Sarek has sexual problems, this time inadvertantly created by D. C. Fontana in the animated episode, "Yesteryear." You recall that when the crew of the Enterprise found themselves in a universe in which Spock did not exist, they asked the ship's computer for information about him. He had died in Kahs-wan, you remember—but do you remember what was said about Sarek and Amanda? That is what triggered this gruesome little story-beware the unreliable narrator!

"Visit to an Alternate Universe" is one of two stories in which we have Sarek without Amanda. The other is "Logical Alternative," in the universe of SHOWCASE, created by Sharon Emily. The story, though, goes off into a universe in which there is an Amanda. Confused? You won't be after.... Well, maybe you will. That's all right--confusion is the fun of changing universes! "Logical Alternative" is my "get'em" story. Remember all the get-Spock and get-Kirk stories? There is some perversity in all of us (you always hurt the one you love) that makes us write stories in which we rip up our favorite characters physically, mentally, or both. Without apologies, here is Jean Lorrah's get-Sarek-and-Amanda story.

Finally, "The Warmth of a Touch" takes place in the Sahaj universe created by Leslye Lilker. Like NTM and SHOWCASE, this is one of those universes in which Vulcans are fully sexually functional whenever they want to be. The relationship between Sarek and Amanda is warm, humorous, understanding--you know I'd be into this universe, don't you? The hero of Leslye's series is Sahaj, Spock's son, and one of the main themes is how he and his grandfather, after a very rocky beginning, eventually come to understand one another. My story comes late in the series, and only touches on the relationship between Sarek and Sahaj. It is basically a Sarek and Amanda story.

Instructions on how to get more stories in each universe follow each story—except, of course, those which do not really fit into any universe except that of my own ever-twisting mind. Information on other fanzines you might enjoy is also sprinkled throughout this zine.

Once again, please do not try to make these stories fit with each other, or with NTM or EPILOGUE. Just relax, clear your mind, and enjoy. Isn't that what fandom is all about?

See reactions and reviews for Touched.