You may be looking for Despatches, a newsletter community on LiveJournal for the Age Of Sail fandom.

Despatch is a publication of the Mark Lenard International Fan Club, a club that was based in Minneapolis, Minnesota, USA. It contains fiction, non-fiction and photos of Mark Lenard. The title alternates between "The Despatch" and "Despatch." There are 44 issues.

It is one of the very earliest Star Trek fiction zines published, and one of the first to feature fanfiction. For others, see List of Star Trek TOS Zines Published While the Show Was Still On the Air.

Contributors of cartoons included Paula Nass, among others.

Ruth Berman was this zine's editor up to issue #25, and perhaps the entire series. There is a large gap between issues after issue #25, and a review said that Sharon would be taking over in "the summer." Whether Sharon did is unknown, and the large space between issues around 1975 and 1976 may represent some leadership change. Or not.

In 1977 (possibly earlier), Gail Saville and Barbara Metzke took over as editors.

Berman commented on this zine in 2017:

Despatch – the Mark Lenard Fan Club was founded (and the Despatch, its newsletter, edited for its first years) by Maureen Bourns (Wilson), aided by Rosemary Ullyot & Alicia Austin. They happened to write to him to ask permission to start a fan club for him just when he heard that he was going to be a regular in the cast of a new show, “Here Come the Brides.” Left to himself, he did not feel that it meant much for a freelance actor to have a fan club, but as a regular on a series, he felt that a fan club could help win viewers to the show as a whole and to his role in it, and he gave them permission to start the club, staying in contact with them to give them cooperation, news, etc. About the time the show went off the air, Maureen (who had gotten engaged to be married) decided she wanted to focus on other things, but thought it would be a pity to see the fan club end, and asked if there was a volunteer to take over running it. I liked Lenard’s acting, and especially his acting on “Star Trek” a lot, and thought it would be fun to volunteer to take over the club, and use its “Despatch” as a place to reprint some of the outstanding fan-fiction about the Romulan Commander and Sarek that was coming out in various fanzines. Also, when I lived in Los Angeles and was working for Lincoln Enterprises, I had enjoyed getting three opportunities to meet Lenard, once when he attended a sciencefiction con in Berkeley that was attended by Maureen, who held a party there for his fans, once when Dorothy Jones and Astrid Anderson and I went to a production of “a Midsummer Night’s Dream,” in which he played Oberon, and he joined us for conversation and coffee after the performance, and once when Maureen came to town and invited me to join her on a visit to the set of “Here Come the Brides.” So I volunteered to take over the fan-club, and did have a lot of fun reprinting assorted outstanding Lenard-role-based stories. (I didn’t have much contact with Lenard while doing that – HCtB had gone off the air then, and he didn’t have a series he felt he ought to be promoting if he could.) After three years, I’d reprinted the stories I especially wanted to reprint, and wanted to focus more on my “T-Negative” fanzine, so I turned the club over to Sharon Emily, and it ran several years more, first with her, and then with Gail Saville & Barbara Metzke.[1]

Despatch 1 was published in October 1968.

Despatch 2 was published in December 1968.

Despatch 3 was published in February 1969.

Despatch 4 was published in April 1969. (Yearbook)

Despatch 6 was published in August 1969. There is also an August Addendum.

Despatch 7 was published in October 1969. 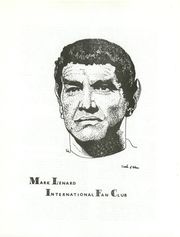 Despatch 9 was published in October 1970. (Yearbook) 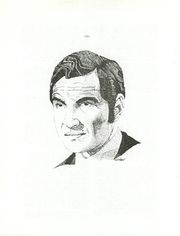 Despatches collects selections from issues #1-#13 and contains 65 pages and was published in 1986. 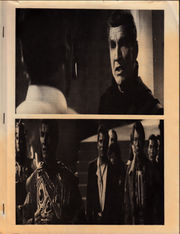 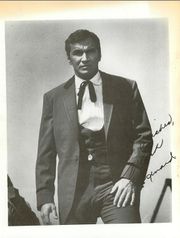 It includes the three years' worth of content edited by Maureen Bourns, the fan club's founder. This reprint is mostly complete, but omits a few items available elsewhere or not dealing with either Lenard or Star Trek. Featured are "Here Come the Brides" and visits to the set, also Sarek and the Romulan Commander.

This is a reprint of 'most of" Despatches, the newsletter of the Mark Leonard International Fan Club, collected in one volume. Not being much of a fan club type myself, I was surprised at how much I enjoyed this zine. This volume contains wonderful cartoons, clear repros of a lot of interesting photos, and some entertaining anecdotes. Repro is gorgeous and it is well-designed.[2]

It includes articles, letters of comment, a crossword puzzle, reviews...

It includes articles, letters of comment, con reports by Carol Lee, Maureen Wilson ("David Gerrold was much nicer than I've ever seen him"), and Shirley Maiewski for NY STCon/International Star Trek Convention, a poem by Jane Dalley called "Spock's History,"

It includes articles, letters of comment, a crossword puzzle, reviews, and one fan story (“Of Krekcakes, Muscles and Nerves” by Nancy Ann Miller). There is also an account by Paula Crist and Ev Turner of a set visit with Lenard. 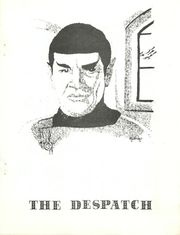 "The Ambassador and the Lady" by Ellen Winder, reprinted from Pastaklan Vesla #4

[art]: Mark Lenard isn't as hard to draw as Kirk. Nice use of spatter on the reprinted cover. Sarek looks a little puffy in the chops there — must be allergic to Tellarites. A good likeness, though. Good illo of Gav by Tim Kirk, whose caricatures in The Trouble with Tribbles were charming. Did you stencil this or did Tim? [Neither — a wonder of modern science called the electrostencil machine.] "Is There an Alternative" by Paula Nass belongs in the magnetic corridor between universes along with Lazarus 1 and 2. Marge Harris' e-stencil is an interesting experiment, but it doesn't look like Lenard. Austin's little illo on p. 37 is one of the worst things I've seen him do.[3]

Despatch 18 was published in Winter 1974 and contains about 32 pages. 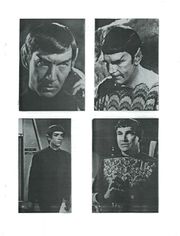 front cover of issue #19, a photo page of four Vulcans: Stonn, Surak, one of Sarek's aides (played by Nimoy's stand-in), and Sarek 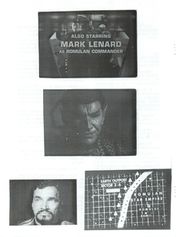 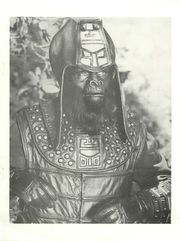 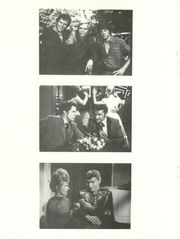 Reprint note: omitted are info on membership price raise, ADA chair man address, membership list, and a newspaper copy of photo of Bolt Brothers which did not run well. Added is photo page of better shot of Bolt Brothers, along with Aaron Stempel with Jason Bolt and Sarek with Amanda. Also added photo page of Aaron and Jason from "His Sister's Keeper." 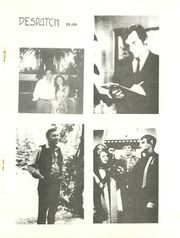 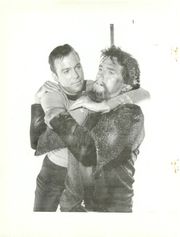 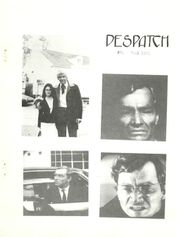 It includes a 7-page story reprinted from Pastaklan Vesla #4 called ‘The Commander,’ ‘If I Should Wake Before I Die’, a three-page story, 'Oi Vaycon' (reprinted from T-Negative #6), letters, a limerick, notes and a 2-page newspaper reprint: “Actor likes ‘bad’ roles."

Do you have to be a Mark Lenard fan to enjoy this zine? No, but it helps. As with all group publications, some of the jokes and references aren't clear to the outsider. Still, fro the ST fan there is quite a bit here of interest. There are two stories, both featuring Mark Lenard in TV roles. In "The Commander" by Nora Smith, we are given the life story of the Romulan commander from 'Balance of Terror," as told by his old friend the Centurion. It is a sad, touching story with an ironic ending. "If I Should Wake Before I Die" by Doris Beetem, is about Rogloff, a character Mark Lenard played in an episode of Hawaii 5-0. The ST tie-in here is that the wife he thinks is dead and reappears and reveals her identity as a Vulcan woman. It's better than it sounds because it is well-written. Other features include a letter column, club notes, the membership list, and a reprint of a con report by Ruth Berman on the 1968 World SF Convention in Berkeley (which I found much more interesting than the average con report). For anyone even mildly interested in Mark Lenard and the roles he has played, you can't go wrong with this one. Starting next summer, the new editor will be Sharon Emily.[4] 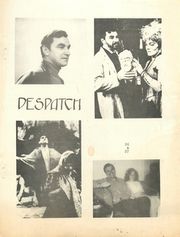 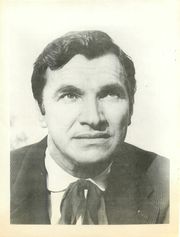 In 1985, a fan commented that "Echoes Through Time" was very similar to some of the pro novel Ishmael:

The only problem I had with Ms. Hambly's novel, is that I found it very similar to two short stories written years ago. The first one is "Mind Sifter," written by Shirley S. Maiewski, published in STAR TREK: THE NEW VOYAGES by Bantam Books. In the "Mind Sifter," it is Kirk who is captured by the Klingons, tortured with the mind sifter, and winds up on Earth in the past. The second story is "Echoes Through Time" by Eileen Roy, published in the Mark Lenard International Fan Club zine, Despatch, issue 27. In this short story, the year is 1869, and Aaron Stemple is in the woods outside of Seattle, when he runs into Sarek and Amanda. Stemple takes them to his cabin outside of town and becomes friends with them during their short stay, Sarek volunteering to take a look at Stemple's mills' bookkeeping. As in ISHMAEL, Amanda is discovered to be a descendent of Stemple! [5]

Despatch 32 was published in October 1977 and contains 38 pages. Editors were Gail Saville and Barbara Metzke. 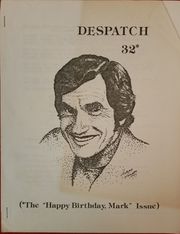 Despatch 35 was published in August, 1978. Cover art by Linda Lindsey, interior art by Susan Wyllie. No editors are listed per se, but those tasks were presumably carried out by the Fan Club co-presidents, Gail Saville and Barbara Metzke, who are the only officers listed for this issue. 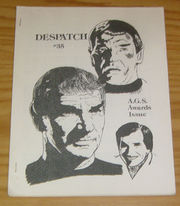 Despatch 36 was published in 1978. No editors are listed per se, but those tasks were presumably carried out by the Fan Club co-presidents, Gail Saville and Barbara Metzke, who are the only officers listed for this issue. 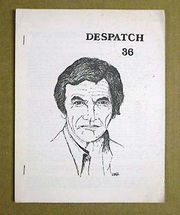 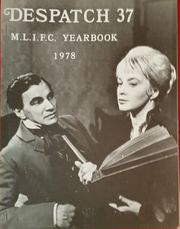 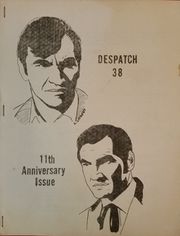 Despatch 39 was published in August 1979. Gail Saville and Barbara Metzke were co-presidents. 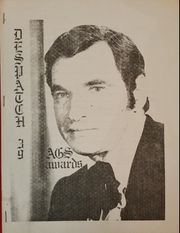 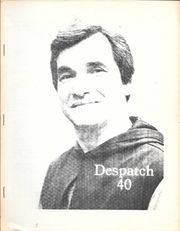 From the editorial: "Front and Back Cover Pictures were loaned to MLIFC by Mark Lenard; copy negs taken and enlarged from the original proof sheet by Barbara Metzke. (Slugger's Note: After standing over the camera for hours shooting all the negs for the pictures Mark loaned us, and coming away from the task sent into a pretzel and looking like she spend about four days in the saddle, I felt my co-prexie deserved a credit. Also, although the electronic stencils do not do the expressions on these photographs credit, the BACK shot typifies the look we get when we do something nutty like when we stick out our lower lips and say, "But we'd go see YOU more than that if YOU were in a play!')" 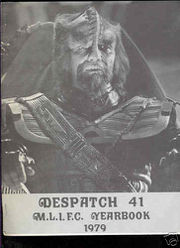 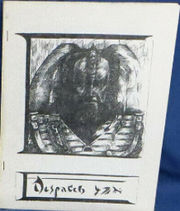 cover of issue #42, illo of the Klingon Commander by Mary Stacy-MacDonald 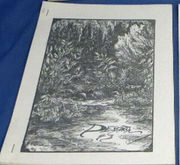 Despatch 44 was the final issue. It was published December 1980. 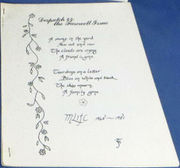 cover of issue #44, art and poem by Jennifer Tifft