To Fellow Nimoy-Spock Fans is by Gene Roddenberry and is an example of the periodic letters he sent to fan publications.

Roddenberry frequently communicated with fans regarding many projects. Most of Roddenberry's open letters encouraged fans to write letters to support Star Trek movies, to support the animated series, to support him personally as he dealt with other The Powers That Be, and to explain various happenings in the world of Star Trek. In 1977, hewarned them regarding trouble ahead. He also personally called cons.

The subject of this particular letter was Roddenberry's intense negotiations with the actors of the original series, namely Leonard Nimoy. The letter's focus was on his supposed inability to get Nimoy on board with upcoming Trek productions. The letter is most likely a DIRECT response to the impromptu speech Nimoy gave at Star Trek America in September 1977. See Leonard Nimoy Addresses the Star Trek America Convention (1977).

Roddenberry's letter is an example of the unique relationship Roddenberry had with fans, that of being the benevolent TPTB who doled out goodies as well as coal, a man who straddled the fine line of being "one of you," but also not.

Even the title indicates the straddle of allegiances: Roddenberry tosses his hat in the ring as a "fellow fan." 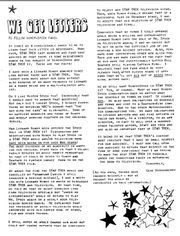 It comes as considerable shock to me to learn that this letter is necessary. However, STAR TREK cast members and fans have advised me that there is some misinformed rumor on the subject of Nimoy-Spock and STAR TREK II. These are the facts.

I have been a Leonard Nimoy admirer since long before there was a STAR TREK. You cannot know much about our show without also knowing of my many tributes to Leonard as a human being and a multi-talented artist.

Do I like Mister Spock too? Incredible that I should have to answer that questionl Not only did I invent Spock, I risked everything by refusing NBC's demand that "the guy with the ears" be eliminated. Some of my happiest memories are those of Nimoy and myself working together on the original series.

Has Leonard Nimoy been offered the Spock role in STAR TREK II? Discussions and negotiations with Nimoy to play Spock in a STAR TREK movie and/or television show have been going on for over two years. The best evidence of my sincerity in wanting our original stars back is that I voluntarily reduced my movie profit percentage so that it could be given to Nimoy and Shatner to further induce them to do the STAR TREK film.

At about the time the STAR TREK movie was cancelled by Paramount (which I still consider a serious mistake), I had a meeting with Leonard Nimoy in which we discussed STAR TREK and television. At that time, he told me that he might consider long form television specials but "under no circumstances" would he return to play Mr. Spock again on a weekly hour television series basis. He explained that the pressures of weekly television would interfere with his career goal of stage, film and other things.

I still hoped he would change his mind but could not ignore reports that he continued to reject any STAR TREK television possibilities in newspaper columns and in television interviews. Then, when Nimoy finally became part of a successful play on Broadway stage, I had to accept that his rejection of STAR TREK television was final.

Convinced that no terms I could arrange would bring a willing and enthusiastic Leonard Nimoy into the role of Mr. Spock on television again, I had no choice but to get on with the difficult job of inventing a new science officer. Also, perhaps some interesting other now alien too. This job was made easier by the fact that we did have the exceptionally gifted Bill Shatner still playing Captain Kirk. I believed that our fans would be very pleased that after eleven years it appears that we'll get six out of seven original actors back.

Do we still want Nimoy-Spock in STAR TREK II? Yes, of course. Must we have the Nimoy- Spock combination back to matter what the schedule or terms or cost? Of course not. We also have obligations on schedule and terms and cost to a Shatner-Kirk combination. And to the other actor-character combinations too. We have obligations to episode writers -who are fine artists in their own right, to a director, to an art direotor, in fact to well over a hundred other talented actors, staff and crew who are also an important part of STAR TREK.

It seems to me that STAR TREK's content must indicate that I have no small respect for our audience. I must now call upon our audience to return that respect in the form of some confidence that I am trying to make the best STAR TREK II possible under all the conditions faced in returning the show to television.