Stardate 1977 was a commercial outfit that gained notoriety in the mid-1970s for selling illegal copies of Star Trek episodes. It was inferred by that fans were the ones behind this enterprise. As it were.

These letters are an example of how Gene Roddenberry and TPTB interacted directly with fans to further various interests and fostered a scene of implied cooperation. It was also, in some ways, an example of using fans against other fans to police a situation from an unequal position.

"Star Trek clubs were used by Roddenberry, not just for the promotion of Star Trek in its various forms, but also as a tool to track down licence violations by appealing to the fans’ loyalty to the show, and to him.... In this letter, fans were encouraged by Sackett, Roddenberry’s personal assistant, to keep up their support of the show, and thanked for “dobbing in” illegally produced goods. The warning that Roddenberry would not like his “friends” to get into trouble and should boycott such people is explicit in the language, with the underlined illegal and not authorised: he is only thinking of his friends when sending out this letter as he would not like to see them “being taken advantage of”. Once again, it came from the Office of Gene Roddenberry, rather than Paramount Studios and he was appealing to the fans as the entity of the show/creator, rather than that of a Paramount employee, which he was at the time. [1] 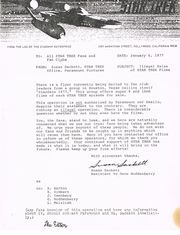 copy of a January 7, 1977 letter that was printed in Alpha-Omega #3; other clubs printed a copy of this letter as well, including At the Helm

There is a flyer currently being mailed to fan club leaders from a group in Houston, Texas calling itself "Stardate 1977." This group offers super 8 and 16mm films of each STAR TREK episode for sale.

This operation is not authorized by Paramount nor Desilu, despite their statement to the contrary. They are running an illegal operation. There is considerable question whether or not they even have the films.

You, the fans, stand to lose, and we here are naturally concerned when we see our loyal fans being taken advantage of. We urge your boycott of these people. We do not wish our fans and friends to be caught up in anything which will cause them harm. Many of you have contacted our office to inform us of these operators, for which we thank you wholeheartedly. Your continued support of STAR TREK has made it what it is today, and what it will bring in the future. Please keep up your fine efforts!

Paramount has informed us of a group based in Houston, Tx. which may be illegally selling super 8 and 16mm ST films. There is doubt that they even have the films, and for W.A.F.S.T.S. and Paramount, I suggest you boycott these people who are most likely out to "rip you off." The group is called "Stardate 1977," so be on the alert! [2]

In a recent letter from Paramount Pictures Corporation, we were informed of an illegal organization in Texas calling itself Stardate: 1977. It advertises STAR TREK films for sale, claiming they are licensed by Paramount to do so. Not only are they not licensed, they probably don't even have the films. They are sending flyers to organizations listed in the ST Welcommittee Directory (we received one early last month) advertising the films. Please avoid this organization. [3]