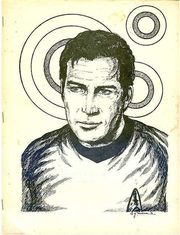 front cover by Gee Moaven, reprinted in All About Star Trek Fan Clubs #6

back cover by P.S. Nim

Diplomacy is a gen Star Trek: TOS 68-page zine of fiction and articles dedicated to William Shatner. It was edited by Maxine Lee Broadwater. The front cover is by Gee Moaven.

It was meant to be a club annual, but this was the only issue.

The dedication: "Dedicated to William Shatner, the Man and the Artist who is gentle on the brain, a joy to behold with the eyes, Diplomatically Loving to the heart, and a True lifting of spirit to the soul."

Also from the title page: "This journal is not intended as any infringement on Norway Productions, Star Trek, or Paramount. It is intended solely for the purpose of enjoyment of the members of United Friends of William Shatner and any other fans who may wish to purchase a copy."

This publisher also registered her zine with WSA as #1103.

From "Trekking Toward the Future

At first blush, there's something frightening about the intensity of the Star phenomenon. Boys and girls, young men and women, and even some not-so-young men and women seem to lose touch with reality whenever the topic of the former television series is brought up. They dress in Star Trek costumes, tell dates using Star Trek calendars, spend their money on all kinds of Star Trek paraphernalia, and they band together by the thousands in clubs and conventions in the Star Trek name. Ballantine Books has sold more than 3000,000 copies of detailed blueprints of the interstellar spaceship Enterprise and the Trekkies have made a best seller --- 450,000 copies sold --- of Ballantine's Star Fleet Technical Manual, featuring such exotica as how to identify alien spaceships and a schematic drawing of the main propulsion unit for a deep-space starship. All this is in celebration of a a television that ran the last of its 79 original episodes in 1969. In those stories, the crew of the Starship Enterprise... rallied the allegiance of devotees who have made "Star Trek" reruns one of the most popular shows on television. Some critics, including no small number of parents, regard the Star Trek phenomenon as further evidence of the retreat into mindless fantasy among the young. But perhaps there is nothing so sinister in the movement. On the contrary, it could be part of a renaissance o fundamental verities. "Star Trek" is above all a television show of ideas. The action-filled plots are important, to be sure, but it's the underlying abstract ideas that impart depth to the characters and make them real. The Enterprise crew was grappling with problems like overpopulation, the place of the individual in society, racism, drug abuse, and alienation long before they became a staple of the current brand of "relevant" television programming. Underlying these stories is the subtle postulate that life, in whatever form, is ultimately valuable and that demagoguery and ignorance will be anathema in the future among men of good will as it is today. The very fact that "Star Trek" takes place in the 23rd century also sets if far apart from other television shows. Each episode states unequivocally that mankind as a future and, by implication, the shaping of that future began yesterday. The Star Trek productions themselves are far from deathless drama. They are often unsophisticated and puerile, especially in the waning episodes , when money ran short and the creative integrity of the scripts was compromised. But even so, the message from the Enterprise is that the future is a good place to be and that getting there will be fun. Not a bad message at that, particularly when it is stacked up against the prophecies of gloom and doom that have their own share of breathless devotees.

DIPLOMACY shows the club's dedication and sincere effort to achieve their goals. There is even a curious objectivity in the annual which is uniquely refreshing among club literature. For example, one page of DIPLOMACY is dedicated to a review of the rather poorly received film A WHALE OF A TALE, even though the only sentence that deals with Mr. Shatner's performance in the film was an opinion that a better performance should have been expected of such a fine actor. [1]