Paramount is a film studio, television production company and motion picture distributor, and one of the oldest surviving studios. It briefly owned DreamWorks from 2005-2008. Paramount started television channel UPN in 1995, which lasted eleven years before being merged with The WB network to become The CW in 2006. On January 17, 2006; Paramount Television merged with CBS Productions, which became known as CBS Television Studios.

Fans and Paramount and Pushing Back 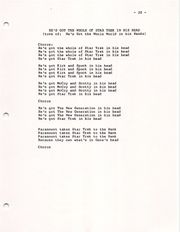 A fan in 1998 commented: "Just remember: Paraborg may hold the copyright but we still own our imaginations!"[1]

"The Lords' Disclaimer"
Our Paramount/Viacom, who art in Hollywood,
Copywrited be thy name.
Thy profits come,
Thy royalties be honored,
In Asia as they are in the "Free World".
Give us this week our piece of canon,
And forgive us our fanfics,
As we forgive the real clunkers you occasionally produce.
And lead us not into litigation,
But deliver us from cancellations.
For thine is the franchise, and the trademarks, and the merchandising,
For ever and ever,
Amen.[2]