Nimoyan is a Star Trek: TOS club newsletter dedicated to Leonard Nimoy in his many roles. It was published by the Leonard Nimoy National Association of Fans. 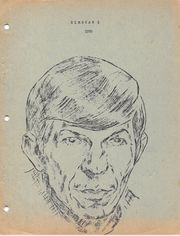 It is printed mimeograph. The artwork is by Diane Marchant and Karen Flanery.

This issue contains reviews and articles on various roles played by Leonard Nimoy as well as fan club news.

Nimoyan 2 was published in November 1971 and contains 41 pages. The front cover is by Karen Flanery, the back by Diane Marchant. 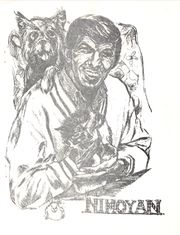 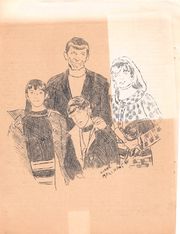 back cover of #2, Diane Marchant: a RPF Nimoy family portrait -- note: this example shows the result of part of the cover exposed to sunlight

Nimoyan 3 was published in November 1972 and contains 43 pages. It was edited and published by John and Bjo Trimbel 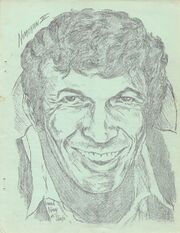 The front cover is by Karen Flanery, stenciled by Bjo. The back cover is a "minor sketch" by Tim Courtney, stencilled by Bjo.