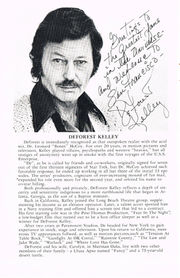 a 1977 photo printed in the 3rd Space-Con program book

DeForest Kelley was an American actor best known for his role as Dr. McCoy on Star Trek: The Original Series. Before Star Trek, he was frequently cast in Westerns and appeared in an episode of the legal drama series Perry Mason.[1] He died in 1999 and a memorial fund was set up at one of his charities, the North Shore Animal League.[2] In Feb 2014, some fans resurrected the memorial fund.[3] More info is here.

DeForest Kelley also wrote poetry and was known to read it at conventions.[4] His poems were published in at least two zines: The Big Bird's Dream and The Dream Goes On.