It Ain't the Lollipop!

It Ain't the Lollipop (Thoughts by the man and the character...) is a 10-page zine written by Walter Koenig. 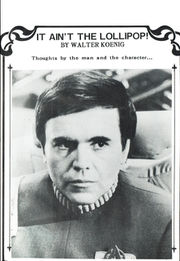 It is a transcript of a short one-act skit in Ni Var form, a conversation between Koenig and the character he played on Star Trek: Chekov.

It is quite a biting, angry commentary on acting, fandom, and hero worship, and involves an airplane bathroom incident.

Description from an Ad

A tongue-in-cheek look at Mr. Koenig's thoughts and feelings on his involvement in ST and its effect on his life. Also included is 'The Chekov/Koenig Debate' which has been performed by Mr. Koenig at several conventions and delighted audiences everywhere. Read this humorous yet insightful glimpse into the complex relationship between an actor and the character he portrays. Each copy is individually autographed! [1]