The Dream Goes On 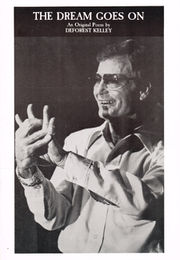 The Dream Goes On is a 12-page digest-sized zine consisting of a single poem by DeForest Kelley, some publicity shots, and single piece of fanart (not credited).

The poem's calligraphy is by Carolyn (probably DeForest's wife).

There appear to be two very different versions of this poem. One is in this print form, and one can be seen here as transcribed by a fan (perhaps from a spoken version?): Here, There, and Everywhere 2nd edition: 7 Years Ago Today.., Archived version