The Machiavellian Principle is a 1982 Star Trek: TOS play by Walter Koenig.

The script was was written to be performed (and sold) at Ultimate Fantasy a disastrous convention which took place in the months following the second Star Trek movie. The actors DeForest Kelly, James Doohan, Nichelle Nichols, George Takei, Walter Koenig, Kirstie Alley, Merritt Butrick and (from TOS and ST: TMP), Mark Lenard, attended this convention. 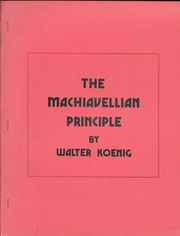 From an eBay seller in 2019: "This is a story treatment written by Walter Koenig as a possible plot for Star Trek 3 or 4. It is interesting because the characters are listed by the first names of the actors -- Walter, Jimmy, George, Nichelle, etc. The science officer is listed as Kirstie, so I am assuming that this was when Kirstie Alley was still portraying Saavik. There is also a Mark listed, presumably Mark Lenard. Also interestingly, "Bill" and "Leonard" do not appear, but the story suggests that they are on an away mission. This is 7 one sided pages, stapled."

The play did go ahead, with DeForest Kelly, James Doohan, Nichelle Nichols, George Takei, Walter Koenig and Kirstie Alley playing their familiar roles wearing specially-designed silver space jackets. Most of the action was confined to a shuttlecraft interior, and was presented more like a radio play. Spock was still dead (as in ST II) and "the Admiral" had been kidnapped by aliens. Mark Lenard was cast as an alien the crew encounter, and the script calls for the entrance of "the Admiral", in a halo of bright light, at the very end. As in: the play was designed so that if William Shatner agreed to a walk-on cameo it could happen. (I don't recall hearing if he did show up or not, but it seemed like the whole play was to lead-in to a convention Q-and-A from William Shatner.) [1]

In 1987, Creation Conventions included Koenig's play in a booklet about the actor entitled Through the Looking Glass. In this version of the script, the name Saavik is misspelled "Savik".