The Big Bird's Dream is a 12-page digest-sized zine with a single 41-stanza poem by DeForest Kelley. 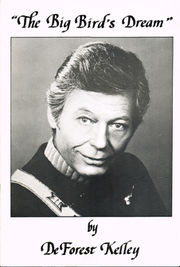 The poem's topic was Gene Roddenberry's creation of Star Trek. It, ironically, begins with a line from Star Wars.

For the complete text of the poem and a photo of DeForest Kelley reading his poem, see Reading "The Big Bird's Dream", Archived version.

Kelley's Mentions of This Poem

I will explain that I wrote this poem called The Big Bird’s Dream in 1977 and I wrote the poem – of course, the show was folded and in limbo – and it’s more or less the story of Gene Roddenberry and his trials and tribulations in trying to sell the series to NBC and then how it only went for three years and then they dropped it. Then Star Wars came out and everyone got excited about Star Wars and Paramount thought, my God, we’ve got this property here, Star Trek, let’s do something with it. So, I wrote this thing... I really wrote it originally for myself and a couple of people heard it, and it amused them somewhat, so I read it first at a convention in Los Angeles, and I called it The Big Bird’s Dream. And it’s more or less self-explanatory as it goes along, it tells... In the meantime, we’d all gone our own way. Jimmy Doohan had bought an RV and he was rolling around the country, you know, just traveling about. George Takei – Sulu – he had a job on the Mayor’s staff, he was very heavily interested in city politics for Los Angeles. And he still had that crazy laugh, that HA-HA-HA-HA. You could hear it all over the lot. He killed a lot of takes during Star Trek II. “For godssakes, get Sulu out of here, you can hear him all the way back here.” So, he was running around. Nichelle was working for NASA. Leonard was in New York at the time doing a play. So, anyhow, I thought maybe... Would you like to hear it? [applause] [1]

[...] Thank you. And, you know, I first read that poem, I think it was in 1977 or 78, at the Convention Center in Los Angeles. They had a huge convention there and it was on that very day they decided to bring Star Trek back in some form. At the time, we were going to make a 90 minute show for television. They were thinking in terms of maybe doing a short series of 90 minute films for television. So it was rather ironical that I had written this thing and on the very day that I read it, they decided to go. Of course, as you know, we never did the television show. They finally struck the sets and rebuilt everything and decided that they were going into the motion picture business. And that brings us up to where we are today, too, doesn't it? [2]

A long time ago, in a galaxy far, far away
There lived a big bird nesting on a play.
He thought if he could hatch it and get it on the air,
He’d make himself a fortune and build himself a lair.

The Enterprise crew was one of a kind
Superb in their work, with good things in mind.
Different in color and different in race,
Green, white, yellow ~ and token black face.

At first, the black was not to be,
‘Til the big bird screamed at NBC:
“It’s either she or I” he began to yell,
“Who knows who’s gonna ring whose bell?”

With great reluctance they agreed to say:
“Okay, fellows, we’ll do it his way.”
At a later time, on another day,
They’d be the first to boast they went that way.

Most who read it said: “This bird is nuts!”
But there was one among them possessed with guts.
“Let’s go with this bird, loud and clear ~
He’s saying things people should hear.

One thing was left for the big bird to do:
Find a name for his dream-come-true.
He gave a big party so the brass would appear,
To name this dream he held so dear.

When the big party calmed down and the feeling was mellow,
The big bird stepped forward to christen this fellow.
“Lift your glasses,” he said out loud,
“I’ve got a new baby of which I’m proud!”

He took an IDIC from his hand,
The symbol he’d created for the change in man.
He placed it tenderly around the small neck
And in a mellifluous voice, said: “Star Trek”

The brass with guts jumped up and down ~
“My God!” he said, “what a sound!
How did he think of such a name?
t’s commercial as hell ~ it’s the name of the game!”

“Let’s do it as a movie, a special or play ~
For heaven’s sake, let’s do it some way!
Precious moments are flying by ~
The actors are aging and soon may die.”

“Are they still available ~ or should we re-cast?
Without the originals, how long would it last?
Go get the big bird ~ he knows where they are
And have him remind Spock he’s still not a star.”

“We’ve got to keep their egos down
In case replacements can’t be found.”
So in flew the big bird, ready to squeal,
Naturally anxious to make a deal.

“What’s with Shatner? How does he look?”
“I don’t know ~ but he’s written a book.
Seems he wanted the world to know
How he suffered, making that show.”

“What’s with Kelley ~ what’s with his life?”
“He’s living in the Valley ~ with the very same wife!
I know one thing that’s buggin’ him,
He’s sick of that line. He’s dead, Jim!”

“Now what about Doohan, the one with the brogue,”
Well, he bought a motor-coach and hit the road.
He’s grown a beard ~ it’s silver and black,
And he says he wants to keep it, if he comes back.”

“What about Takei ~ he flew the damned ship…”
“Well, he’s into politics ~ a whole new trip.
He had a job on the Mayor’s staff,
But they couldn’t take that crazy laugh!”

“Okay, okay, what about Nichelle?
The one you said would ring our bell?”
“She’s working for NASA ~ goes all over the nation
Trying to interest women in the space administration.”

“That just about covers the entire crew…
Majel’s no problem ~ she’s married to you!”
“Don’t you believe it, not on your life!
don’t make deals with my very own wife.”

“And even though she’s married to me,
She still commands the same high fee.
And if this show goes, she’ll be back, you can bet ~
I’ve never written a script without her yet.

We have received many requests from people asking us if we knew where they could get a copy of the poem 'The Big Bird's Dream' written by DeForest Kelley. Up until now, all we could tell them was that they would have to go to a convention hoping that someone was selling their copy... Thanks to the generosity of Mr. and Mrs. Kelley, Datazine Publications in now able to offer these poems for sale... 'The Big Bird's Dream' was written by Mr. Kelley in 1977 and dedicated to Gene Roddenberry. Mr. Kelley read the poem at a convention and the fans loved it. This prompted the Kelleys to put it together in a booklet form so that all fans could enjoy it. Mrs. Kelly calligraphed the poem and bound it in beautiful blue paper. Each copy has been autographed by Mr. Kelly, giving each poem a unique personal touch. [3]