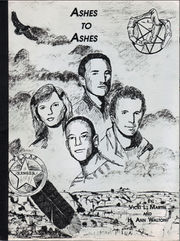 cover of the zine, Ashes to Ashes

The series begins with the idea that the aliens defeated in the 1953 film of the same name have been hibernating, rather than dead. Harrison Blackwood (played by Jared Martin) leads a very small group in the fight to stop them and keep the larger population of the planet from knowing about the invasion. He is joined by the military leader of the group, Paul Ironhorse (Richard Chavez); the scientist, Dr. Suzanne McCullough (Lynda Mason Green), and her daughter Debi; and the computer tech, Norton Drake (Philip Akin). 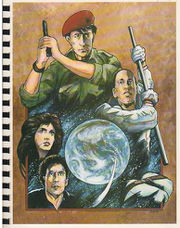 cover of the zine Bring 'Em Back Alive, artist is Connie Faddis

At the end of first season, control of the show was handed off to the son of Paramount's CEO, Frank Mancuso Jr., who decided to take the show in an entirely different direction. In the first episode of second season, we are shown that the invasion has gone from covert to overt; Ironhorse and Drake are killed; Blackwood and the rest go, literally, underground (they begin to live in the sewers); and a new character named John Kincaid (played by Adrian Paul) is introduced as the group's security/para-military defender. Many of the characters seemed changed radically from the first season, and the basic physiology and structure of the alien invaders was also changed.

Part of the controversy was Mancuso Jr.'s purported reasons for killing off Ironhorse (he saw him as having been painted into a corner, in terms of development, but was unaware that Ironhorse was the character most popular with fans) [1], and especially Norton: Mancuso said in an interview in Starlog that he felt no one wanted to see a disabled person on television [2] [3]

Some fans found the changes to be an improvement, but many more did not. Some unhappy fans refused to watch the second season, others watched but considered it an alternate universe, and still others ignored it all together in the same way Beauty and the Beast fans did when the popular character, Catherine, was killed off.

The changes did, however, lead to an upswing in War of the Worlds zines; fans unhappy with canon tend to take things into their own hands. Many of the zines published were "first-season" only, or required contributors to figure out a satisfying and logical way for Ironhorse and Norton to return to the team. [4]

Some Specific Fan Comments Regarding the Second Season: The Mancuso Changes

For other examples of fan reaction to the creative changes by Mancusu in the show, see the letterzine, The Blackwood Project.

A lot of people aren't [fans of the show] due to the violence with its Cronenberg touches (in the first season).

The second season was toned down, financially and in violence, too, though that first ep was a lulu. It was a good try for a non-network program and probably had a predictable run of one year, like Alien Nation. Now Alien Nation had the family touches, great continuity, and likeable people in an "almost tomorrow" future (like WOTW), was a step or two above WOTW in production values, and of the two, would be my choice for new episodes, as long as there aren't any chances for VTBS' return. [5]

Are you still grieving because Paramount killed off the two most popular characters in the series? Let BeBA make it all better! We offer logical alternatives to the screen premise, using various script-breaking techniques to prove that Ironhorse and/or Norton survived the bloodbath of the Second Wave. [6]

Bring 'em back alive? Why? 'Cause we're mad as hell, that's why! Okay, so Mancuso decided both Ironhorse and Norton had to die, but that doesn't mean they have to stay dead. We're looking for stories that will believably save our boys, ressurrect them, or explain why they couldn't really be dead in the first place. Remember: logic and believability are what we're looking for here. And if, by chance, a character named Mancuso [7] gets to suffer heavily along the way, your editors will be really pleased with you! Send all submissions to [address redacted]. And forget not thine SASES. [8]

Well, the new season of War of the Worlds is upon us - except it's not really War of Worlds, is it? And the atrocities being committed are not just the atrocities attributed to the aliens, are they? And you know what that means, don t you? Let us hit you with our proposed zine and make it all better.... Yeah, they didn't have to trash the Colonel; they didn't have to trash Norton; they didn't have to trash the whole first-season universe; and we don't have to let them got away with it! Can you plausibly bring back Lt. Colonel Ironhorse? Can you make sense of what "went on" between last season and this? Can you negotiate the plot inconsistencies and do the revamp of the show that should have been done? Can you even possibly find a way to give Norton back his place among the living? CAN YOU KEEP THE COLONEL FROM STAYING A CASUAL CASUALTY??? We're looking for plausible, good, complete stories - it's gonna take more than simple wish fulfillment to help us get through this one! Even if you have an idea but can't develop it yourself, get in touch; we'll jiggle it in front of some writers, and you'll still get credit for your idea, because you've helped the Cause! Take your pick of editors to contact, you aggrieved, grieving, talented, spunky fen... [9]

Most WOW fiction appears in print zines, and most is gen, thought there is some slash in multimedia zines.

For a full list of WoW zines, see Category:War of the Worlds.

Single Fandom: Advocate Angst | The Advocate's Deli | Alien Sushi | And Hell Followed With Him | Another Battlefield | Ashes to Ashes | Ask and Ye Shall Receive | Celebrity Mudwrestling | Cell-Phase Matching | Code 47, Level 3, Authorization 10 | Cosmic Travelers Guide to War of the Worlds | Dee-Pice | Downloading Aliens | E.T. Phone Help | Forgive Us Our Trespasses | The Forrester Papers | Green Floating Weirdness | The Happy Hunting Ground | Heretic Flotsam | Ironhorse Project | It Is What It Is | Late Night Musings | Leap of the Worlds | Let the Children Come.... | Mind Games | Need to Know | Pearl of Great Price | The Phoenix Mountain Project | The RC Dispatch | A Sacrifice of Jealousy, A Garden Locked, A Fountain Sealed | Sarge | Scent of an Alien | The Second Wave | To Life Immortal | The Triangular Whatsis | Troubled Times | WOW! | War of the Worlds Fan Fiction Bibliography | The War of the Worlds Special Gen Collection | The War of the Worlds Special Slash Collection | War of the Worlds Surplus | Wasting Aliens | Whispers of Armageddon | The Whitewood Chronicles | Yea Though I Walk | You Call This Living?