Of Dreams and Schemes

Of Dreams and Schemes is a gen multifandom anthology with twenty-five issues.

The editor writes of her zine:

Although zine editing is a hobby with us, the three co-editors of OD&S take it quite seriously. Each of us has our specialty, which is probably why we get along so well. Debi Barbich does much of the graphics and typing, Martha Crawford does the editing and some of the writing, and I do whatever else needs to be done. I'm also the slave driver and financial backer. We believe in editing the stories we receive—with final approval of the author, of course. Luckily, Martha is an editor (In real life vs. fan life!) and without her knowledge the zine wouldn't be half as smooth as we hope it is... Fandom is not my life, but It is a very important facet of it. I have met some of the nicest people through fandom—my two co-editors for example. I love hearing from the readers of my zine and really try to include a personal note with each order. Basically, I know what pleases me from a zine editor, and try to give the same thing back. Putting out a zine is fun—or so I keep telling Debi and Martha as I walk around with my whip! May fandom always be as varied as It is today. Or as that certain Vulcan would say—Infinite Diversity in Infinite Combinations. What wonderful words to contemplate. [1] 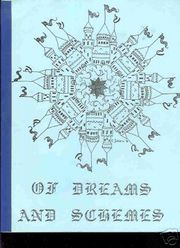 Of Dreams and Schemes 1 was published in May 1981 and is 101 pages long. It has art by Laura Virgil and others. 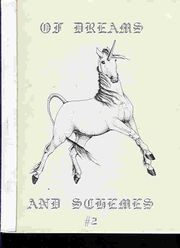 Of Dreams and Schemes 2 was published in May 1982 and is 133 pages long. Art is by Melody Rondeau, Laura Virgil, Frank, Schlein, Ann Larsen, and Barbich.

[zine]: Of Dreams and Schemes has changed very little since the premiere issue and what has changed seems to be all for the good. The enjoyable mixture of universes and the obvious care taken in production have been retained… The zine is not overly-endowed by artwork but there is an adequate amount and the vast majority is good. Ann Larsen’s unicorn on the front cover is delightful… The portrait of Kirk on the back cover shows a nice leer, well-defined with a minimum of inkwork. He seems to be saying, ‘How do you do, my dear? I am a starship captain, and I’m sexy as hell.’… Of Dreams and Schemes is a rare commodity in today’s fanzine market; it is a fanzine which is fun to read, and fun to enjoy. Sex and violence have, for the most part, been left for other zines. One need not surrender any previously held feelings about the characters in order to read this zine, even if you disagree with the characterizations, the zine will not offend you. The most this zine will make you do is smile, and perhaps laugh. We highly recommend it to anyone who is looking for a nice time from a fanzine. [2] 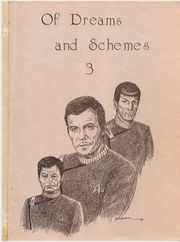 One third is Star Trek, one third Western ("Pistols & Parasols"), and one third other media ("Fancy Free").

[zine]: OF DREAMS AND SCHEMES #3 is the third fanzine to be put out by Catherine Schlein, Debi Barbich and Martha Crawford. What makes this 'zine different from other fanzines is that it is a multimedia fanzine in the true sense of the word. They have sections in the zine dedicated to STAR TREK, Pistols and Parasols (Western), and Fancy Free (which is every thing else). There are many offerings in each section, but I do have my favorites - I enjoyed THE MORE THINGS CHANGE by Lorraine Beatty - a very sensitive McCoy story set at the time of ST:TMP. McCoy feels a nagging need to return and help his friend and at the same time to help himself. GODZIlLLA EATS THE STRANGE BATTLESTAR by Sharon Macy. A Battlestar Galactica tale, sort of. See our heroes, Apollo and Starbuck and 'transferred' with Richard Hatch, and Dirk Benedict and well it's quite a mess. Can Richard save the Galactica? Will Cassiopeia like the kitten? Will Starbuck every get dressed? A funfilled tale, very well written and nicely illustrated. THE NIGHT OF TOMORROW AND YESTERDAY by Catherine Schlein. There are other stories in the, 'zine by Catherine Schlein, but I enjoyed this one the best. She seems to be right in her element with Westerns. This is a Wild Wild West tale of adventure, intrigue and very typical WWW. Everyone one is there from Artemis to Loveless ind you'll enjoy how she weaves the plot in and out with much care. OF DREAMS AND SCHEMES offers many more stories, some very good pieces of artwork and beautiful poetry. This is a 'something for everyone' type of fanzine and if I wanted to introduce someone to the world of fanzines I would highly recommend this 'zine. [3] 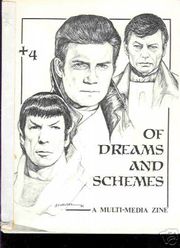 Of Dreams and Schemes 4 was published in November 1985 and is 160 pages long. Artists include: Schein, Rondeau, Spurlock, and Arnold. 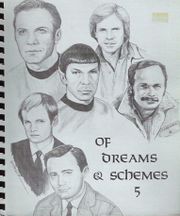 It was the first issue edited by just Catherine Schlein. 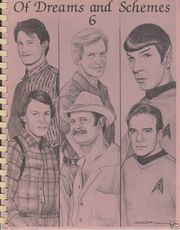 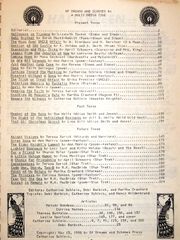 table of contents of issue #6

[zine]: OF DREAMS AND SCHEMES #6 follows the same high standard of quality of writing and stories and its predecessors. It contains "present, past and future" tenses, or in other words, an excellent mixture of contemporary series writing, old tv series and science fiction and fantasy. The well-written stories from Simon & Simon, Riptide, Houston Knights, Magnum P.I., etc., are a treat to read as well as the stories from the old west and Star Trek, and Beauty and the Beast. "Selective Amnesia" (Riptide) showed how, after Murray was hurt, everyone pitched in to help find his attacker because despite everything, Murray gets to people. The other stories are just as interesting to read and I couldn't put this zine down. Being more of a science fiction/fantasy reader, I really enjoyed the future tense section, especially "A Little Vulcan Humor." It was just hysterical and I could just see Spock's expression when McCoy opened his birthday present! "Lighted Doorways," a Beauty and the Beast story, captured the essence of the series and I wanted to help save Vincent from the accident. All of the other stories were very good and I hated to come to the end of the zine because I wanted more. [4] 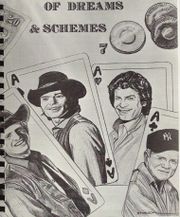 Of Dreams and Schemes 8 was published in September 1992 and is 220 pages long. 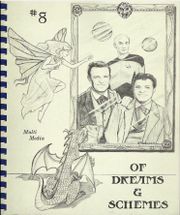 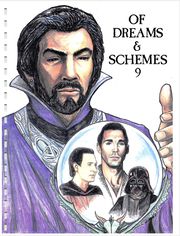 Of Dreams and Schemes 9 was published in May 1994 and is 228 pages long. It was edited by Catherine Schlein, Debi Barbich, and Martha Crawford.

For thirteen years, we have been stepping to a different drummer—a drummer who has taken us on Henry David Thoreau journey none of us expected. We started when fandom was mainly Star Trek, Star Wars, a smattering of westerns, and two relative newcomers — Dr. Who and Battlestar Galactica. Since then, we have watched fandom grow and diversify. Star Trek is still there — but now it's not only Kirk, Spock, McCoy and crew, but a new generation—and a deep space station. The westerns still touch us, but fewer now, and there are whole new fandoms opening up — X-Files, Kung Fu: the Legend Continues, Highlander and old shows with faithful followers — Rat Patrol, Wild Wild West, and more.

Each new show—or old show rediscovered—gives opportunities for exploration of those basic things that make us human — hopes, dreams, loves, and...schemes— plenty of schemes! And in that exploration are born the stories in this zine.

So here we are again, three...old(er) friends who have managed to stay together through thirteen years of putting out zines—and lived to tell about it! With the publication of this, and Splinters of Light II (our all Kung Fu zine), we have put out a grand total of seventeen zines. Wow! Sometimes we even impress ourselves!

So, here we are once again, bidding you all welcome.

[File 12-12]: File 12-13" by Catherine Schlein takes place in the Highlander universe after Richie is an immortal. Richie is the sole survivor of a plane crash and Duncan goes off to pick him up. Agent Mulder spots the story of the lone survivor who walked out of the mountains in the winter. He has been keeping a file on extraordinary cases of survival and is beginning to become suspicious. He convinces Scully to go along and they find themselves involved in Duncan's encounter with another immortal. This story is more Highlander than X-Files, but the characters are well handled and the two shows are well blended. I do wish the story had been longer, as I would have liked to see things handled at a slower and deeper pace. A good read, though, and well worth the zine. Twenty-five pages of medium-size, dense type, with one pen-and-ink drawing. [5] 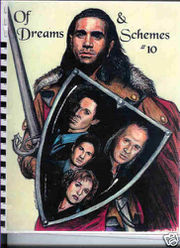 See reactions and reviews for SAM-I-AM. 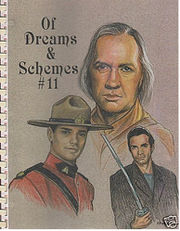 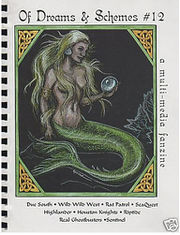 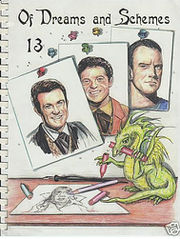 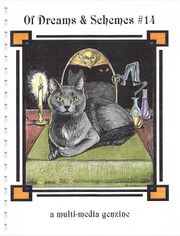 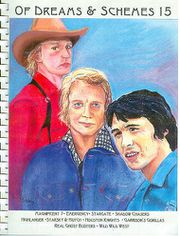 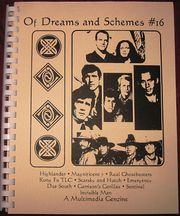 [Territorial Boundaries]: The bad guy has an axe to grind with law enforcement and kidnaps his victims at random-from any precinct, any rank, both male and female. He enjoys torturing and leaving his victims posed for their colleagues to find. Once he’s tipped the incompetent cops off to their whereabouts, of course. Hutch becomes one of the chosen. If you enjoy a hurt Hutch and a frantic Starsky, this story will push your buttons. [6] 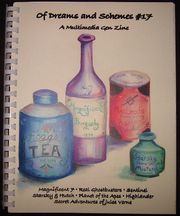 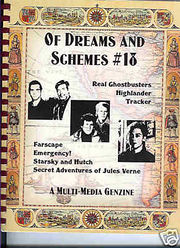 See reactions and reviews for Mattie Coyle's Back in Town. 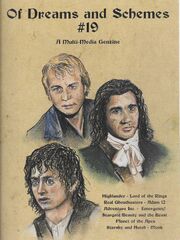 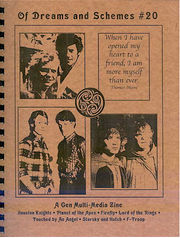 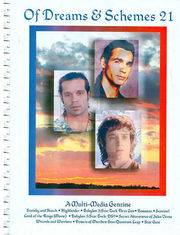 Of Dreams and Schemes 21 was published in May 2006 has 248 pages. From the publisher's summary: Contains no slash, no het, no death fic, only strong friendships, bonds, angst, smarm and hurt/comfort! 8.5X11" comb binding fanzine. 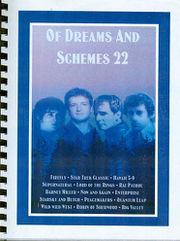 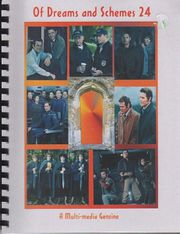 Of Dreams and Schemes 25 was published in May 2010 and contains 236 pages. It was the last issue.