Just You, Me & the Governor

You may be looking for the Alias Smith and Jones zine Just You and Me, Kid.

Just You, Me and the Governor is an gen Alias Smith and Jones anthology.

From a 1993 ad in GAZ: "The two most successful outlaws in the history of the West are still on the lam. JYMATG covers Heyes and Curry as kids, in the Devil's Hole Gang, on the dodge for trying for their amnesty and post-amnesty successes. Come join the posse!"

The summaries below are from the publisher. 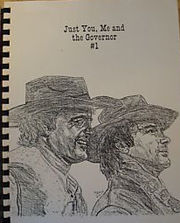 back cover of issue #1, Ginny Daye

Just You, Me & the Governor 1 was published in 1988 and contains 202 pages. It contains nine stories plus poems, trivia and character's bios. 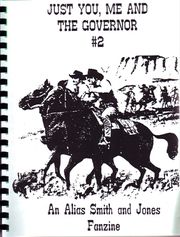 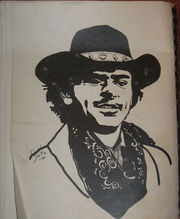 back cover of issue #2, Shiloh

This one has a Wild, Wild West crossover story, a section on consistency problems in the show, disappearing and reappearing gloves, and other such "oops moments" from the series, also a joke section, Title Twisters where they give the title of episodes from the first season as they aired, and the original titles they started with and some in between titles (which do you like best?) and of course, stories. It has the theme of kids and humor. 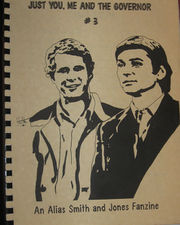 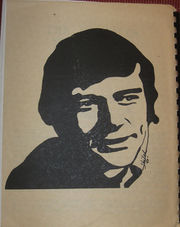 back cover of issue #3, Shiloh

Just You, Me & the Governor 4 was published in 1991 and contains 201 pages. The cover art is by Doranna Durgin. 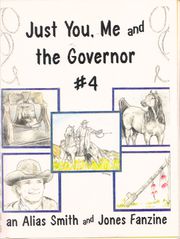 Just You, Me & the Governor 9 contains 252 pages. The front and back covers are by Fliss Davies.

A fan comments on the art in this issue: "A friend who doesn't know Smith from Jones came to see me and noticed JYM&TG #9 on my coffee table. She picked it up, admired the art, flipped through the book, and asked to borrow it. She's now reading ASJ stories because of your art. Keep 'em coming, you're converting new fans!" [1]

Just You, Me & the Governor 10 was published in 1995 contains 168 pages. The art is by Fliss Davies and Laura Virgil. 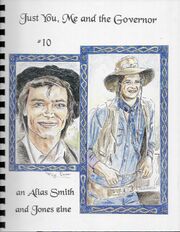 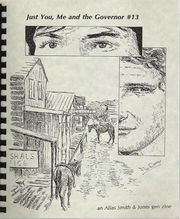 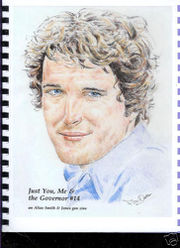 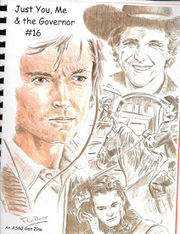 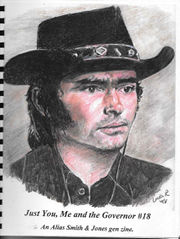 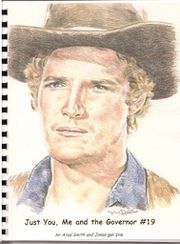 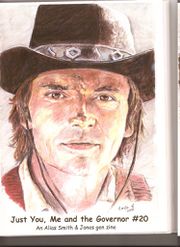 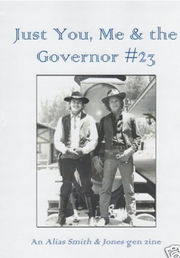