Green Floating Weirdness is a gen War of the Worlds anthology. From Media Monitor: "It's always ooga-boog time around this place, so why not join the fun? We've got fiction, poetry, missing scenes, story fragments, and some honest t'goodness weirdness. Really. We do tend to the swarmy side, with lots of Harrison and Ironhorse relationship stories and good ol' fashioned trash 'em hurt/comfort."

You need to know... There's a new WOW zine, and for the first issue of GFW, subtitled "Selective Memory", we want: missing scenes, extensions of tag scenes (or alternative tags, and prologues -- what happened to our heroes before the first scene of an episode anyway? We'll also take poems, art, and assorted forms of weirdness -- green or otherwise. A SASE will get you guidelines and deadlines for this totally secure tine from the middle of nowhere. But in the meantime, here are the only no-no's: no slash or explicit sex, no undue violence that isn't motivated by the story's plot, no second season material... This is a first-season only zine, not because we don't like the second season, but simply because we haven't seen any of the second season except "Second Wave" so far and don't feel like we can do an adequate job as editors. Once we get the episodes and watch them, we'll be happy to take material from both. We apologise if this is problematic for anyone. [1]

Green Floating Weirdness 1 was published in 1992 and contains 178 pages.

I have a fondness for War of the Worlds. Both seasons. And there's nothing that pisses me off like a bunch of crazed fanatics telling me that I'm not a " true" fan of the series if I like second season. Which is why I've avoided most War of the Worlds fanzines. But then Marty asks me if I'd like to review Green Floating Weirdness. A title like that's gots promise, thinks I. So l grits my teeth and kicks into the editorial, prepared to take the brunt of those anti-second season remarks. So, guess what? No hits. No slams. Just a "live and let live" kind of attitude that I was sure had gone down in flames half-past the Beauty and the Beast third season amateur mud fight These people woo points from me simply because they 're tolerant individuals. Maybe they like first season better, but they don't demand that you do, too. And there's that really bitchin' title....

Unfortunately, that's the best part of the zine. There's a lot of heart, soul, and spit in this fanzine, but it fails on most technical levels. I like the fluorescent green paper on the cover (who needs a night light when the bookcase is glowing at you?), but I wish they'd spent a few minutes and designed something really imaginative to complement the paper choice. The geometric design by itself just don't cut it. Now if the design had been tiled, given alittlemore depth, blurred at the edges as if it had been burned into the paper. So many alternatives that could have led to an interesting, imaginative, attractive cover that might have done justice to the title.

Not that these people don't have imagination—I love the little' "Did You Notice?" sections scattered throughout the zine, detailing little goofs, gaffes, and inconsistencies in the series. Also to be commended is the arrangement of missing scenes and tags in a " Selective Amnesia section, although a small graphic or caption box on the first page of each story would have been a better reference tool than having to flip back to the first page of the section.

Most of the fiction explores the Blackwood-Ironhorse relationship, which seems to reflect the interest of the editors, as well as their contributors. Oddly enough, the best fiction in the zine covers other themes, among which are "Non-Regulation Edged Weapons," by Gillian Holt, in which Ironhorse is faced with prejudice and balancing his heritage with the stringent requirements of the military establishment, and "Passage of Innocence," by Linda Watson, in which Debi goes shopping with Ironhorse and finally finds out what her mom does for a living (all right, the mall sequence goes on a bit too long, and some of the action surpasses realism and becomes overly melodramatic, but it's still an engaging story). The other real winner is a short piece about the frustrations of being Debi, "End of the Rope," by Gillian Holt, which I also found to be one of the funniest pieces in the zine.

Returning once again to this relationship idea...well, your tolerance of the material will depend heavily on whether or not you tend to snicker if Blackwood says, "I love you, man," to Ironhorse, or vice versa, and how much plot you require to suspendyour disbelief enough to wade through major league hurt/comfort. "Through the Looking Glass," by Sheila D.C., "An Eagle in the Wind," by Debra Hicks, and "The Vacation," by Jeanne O'Donnell might just be the kind of fiction you want to read. I kept my sanity by marking the margins and trying to keep count every time one of those sneaky " I love you's*' popped up. (Damn! Missed one.) To give credit where credit is due, Debra did her research for "Eagle," and some of the descriptions of Indian ceremonies and customs are excellent. Unlike some of the lesser WOTW writers, Debra manages to present the culture of the American Indian as human rather than alien; her people are people, and the story doesn't reverberate with the simplistic "red man good-white man bad" that's been masquerading as thematic content in far too many WOTW stories and zines.

Regarding the poetry: "Classified" by Lana G. Merkel, is the most poetic of the lot. The imagery suffers from awkward scan breaks in the lines. The poems are accompanied by portraits of the characters that serve as illustration and both could have been improved by even the barest brush of the wand of the layout fairy.

And just when you think you've reached the end, you haven't. There are twenty-eight pages of flyers and classified ads for other zines. Granted, many readers of single-fandom zines are ravenous for information on other like-minded zine, but why not just include flyers in the envelope? Zines are meant to last from year to year, while flyers go out of date quickly. If a zine reader wants twenty-eight pages of ads, they buy an adzine right? If you're an avid WOTW fan with a particular interest in seeing Blackwood and Ironhorse reveal the PG-rated depth of their feelings for one another (they're just friends, okay?), you probably already have this zine or by now you've skipped down to the ordering information and have the envelope made out. If you're a WOTW reader who expects a solid well-balanced story, an eye for detail and likes a little design instead of outdated flyers, you might want to wait until the next Media West and page through a later issue. After all, it's nice to read a zine with editors who tolerate more than their own view of a series. And if you get stuck, you can always start counting the "I love you's. [2]

Green Floating Weirdness 2 was published in 1992 and contains 196 pages.

Green Floating Weirdness 3 was published in 1992 and is 201 pages long. 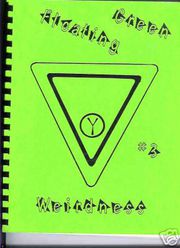 Green Floating Weirdness 4 was published in 1992 and is 219 pages long.

Green Floating Weirdness 5 was published in 1993 and is 231 pages long. 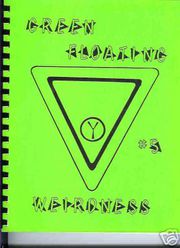 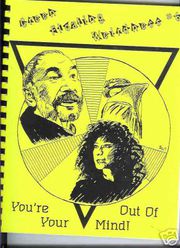 Green Floating Weirdness 7 was published in 1993 and is 245 pages long. 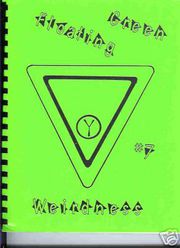 Green Floating Weirdness 8 was published in 1994 and is 200 pages long. 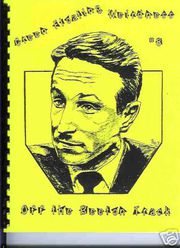 Green Floating Weirdness 9 was published in 1994 and is 296 pages long. 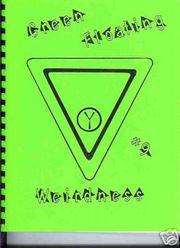 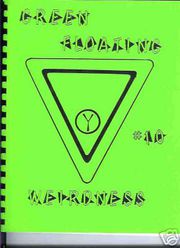 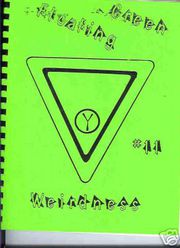 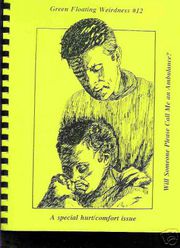 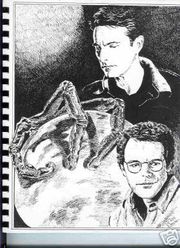 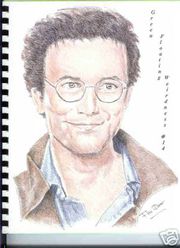 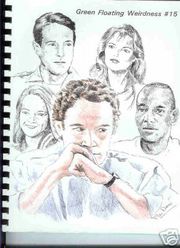 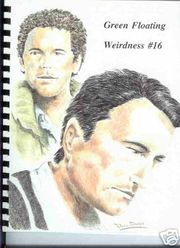 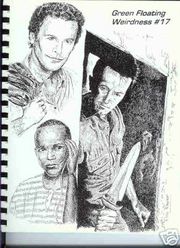 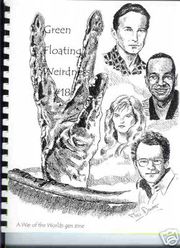 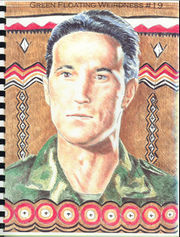 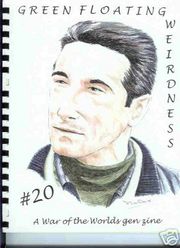 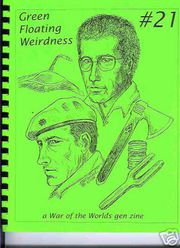 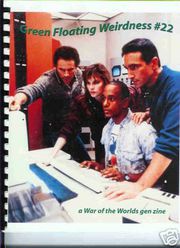 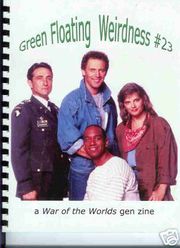